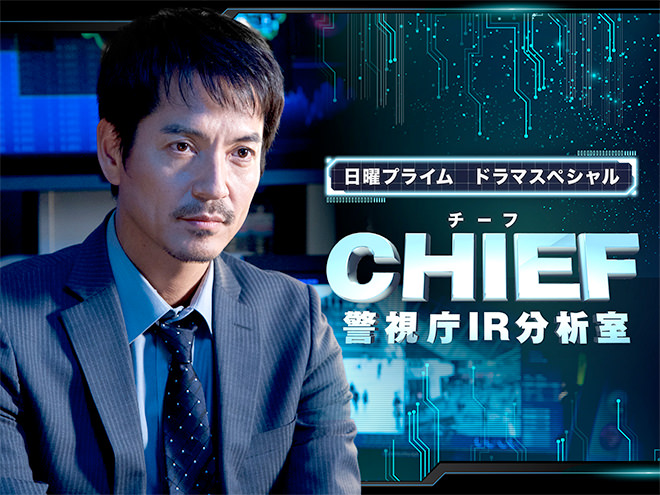 Date: From 9.00 p.m., 15 April 2018
Scriptwriter: Okawa Shundo (Crossroad, Hancho Seasons 2 – 6)
Cast: Sawamura Ikki, Ito Ayumi, Omi Toshinori, Nagase Tasuku, Kobayashi Ryoko, Kasai Kenji, Maeda Aki, Sugawara Daikichi, Masu Takeshi, Miyakawa Ichirota, Yoshii Rei, Yamada Meikyo, Amamiya Ryo, Kaneshige Yohei, Nanba Keiichi
Synopsis: Togane Takichi (Yamada Meikyo), the CEO of a construction company, is shot dead in the street in Nishi Shinjuku in Tokyo. The only eyewitness, Odagiri Naoto (Miyakawa Ichirota), refuses to cooperate with the police for some reason. Fukamachi Kotaro (Sawamura Ikki), a senior member of the IR Analysis Office, is ordered by Nitta Yukihiko (Masu Takeshi), the head of the First Investigative Division, to handle Odagiri. The newly established office was set up on the pretext of tracking and monitoring suspects and witnesses to advance investigations by using the many surveillance cameras and GPS trackers installed in Tokyo. However, it actually plays a supporting role to the First Investigative Division. In fact, Odagiri’s wife Chiharu (Yoshii Rei) died in an accident in Numazu five years earlier. But six months ago, he saw a woman who looked just like her in Tokyo. Even though he consulted the police, he was brushed off. This is why he completely refuses to assist the police. The IR Analysis Office begins an investigation to determine the identity of the woman whom Odagiri saw and prove that she is a different person. Fukamachi and his subordinate Izumoto Noriko (Ito Ayumi) quickly head to Numazu where the obtain information on Chiharu’s secret meeting with Togane. Just as suspicions about Chiharu’s involvement in Togane’s death emerge, Fukamachi is told by Nitta that he no longer needs to be involved in Odagiri’s case. He and Noriko continue the investigation on their own and learn that another woman had been pretending to be Chiharu. They soon discover that the impersonator is Nakatani Asuka (Maeda Aki), who is a hairstylist in Tokyo. However, Asuka says she knows nothing. Meanwhile, it becomes very likely that the suspect in Togane’s murder is a Vietnamese who had company related trouble. The First Investigative Division makes their rounds of the Vietnamese restaurants in Tokyo as they focus on a person with a red star tattoo on the neck. Before long, they learn that Odagiri had met Togane in the past and there are also records of a long travel history to Vietnam. In addition, they find out that Asuka’s father committed suicide in Vietnam too. What is Asuka’s motive for getting close to Odagiri? And what is Odagiri’s true intent?
Official Website: www.tv-asahi.co.jp/chief

This blog contains information and musings on current and upcoming Japanese dramas but is not intended to be comprehensive.
View all posts by jadefrost →
This entry was posted in Spring 2018 Drama Specials, TV Asahi and tagged Chief ~ Keishichou IR Bunsekishitsu, Ito Ayumi, Sawamura Ikki. Bookmark the permalink.