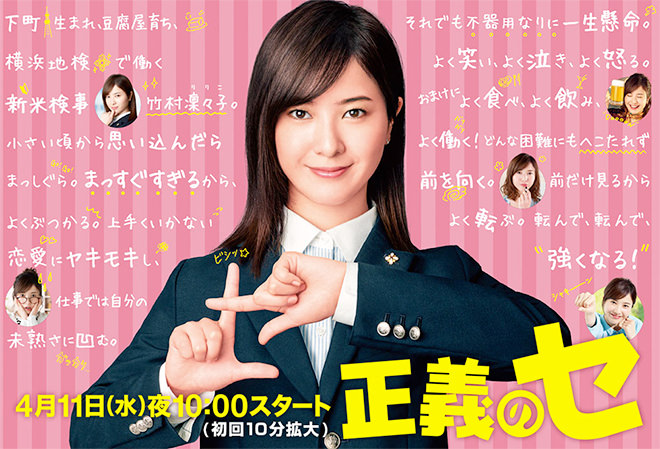 Story
29-year-old Takemura Ririko is a junior prosecutor who has just entered her second year at the Kounan branch of the Yokohama District Public Prosecutors Office this spring. She has a strong sense of justice and a cheerful personality. Ririko lives with her father Koichi, who runs a tofu shop owner in Tokyo’s traditional working class neighbourhood, mother Yoshiko and younger sister Haruko. In her first year as a prosecutor, Ririko was posted to Osaka and had to have a long-distance relationship with her boyfriend Nakamuta Yuki. However, she makes a new decision to have both career and love from now on. The Kounan branch includes the head of the branch Umemiya Joe, senior prosecutor Otsuka Hitoshi, Tokunaga Taichi and other members. The seemingly idiosyncratic veteran Aihara Tsutomu is the administrative officer partnered with Ririko. Ririko immediately attends an interrogation with Aihara. However, she unconsciously shows anger, sympathy and gets sweet talked because she readily expresses her feelings. This prompts Aihara to warn her not to empathise with suspects. Ririko is put in charge of a case of assault. The victim is Mukai Toshiya who works for a construction company. He filed a complaint that he was assaulted by his boss Onda Toru in a back alley and fell down the stairs, sustaining serious injuries which would take two months for a complete recovery. She fumes that Onda is a horrible boss who submitted Mukai to power harassment. But when he turns up for interrogation, he seems mild and does not look like a person who would use violence. Onda completely denies the charges and asserts that Mukai is trying to malign him. In addition, a colleague Tanaka Keisuke, who was together with Onda, gives the same testimony as him. The claims of the victim and suspect contradict each other. Together with Aihara, Ririko proceeds with the investigation to find the hidden truth. As if Ririko’s career is not already tough enough, everything in her life seems to be hanging by a thread. Her boyfriend of four years is pushing her to choose between marriage and work, her father might be having an affair, and there is a chance that one of her suspects was falsely charged. But as she solves one crime and one personal problem after another, Ririko matures as a prosecutor and a woman.

Characters
Yoshitaka Yuriko as Takemura Ririko
A prosecutor who is in her second year at the Kounan branch of the Yokohama District Public Prosecutor’s Office. She has a strong sense of justice and never gives up until she is satisfied. Because she has an abundance of emotion and also stubborn, she loses her temper easily and often ends up failing in interrogations.

Yasuda Ken as Aihara Tsutomu
The administrative officer who supports Takemura Ririko. He is normally cool-headed and treats Ririko in a matter-of-fact way. However, he often is at the mercy of Ririko who charges head-on into cases and usually lectures her against his better judgment.

Miura Shohei as Otsuka Hitoshi
The ace of the Kounan branch of the Yokohama District Public Prosecutor’s Office. He is strict and stoic, and takes a harsh attitude with Takemura Ririko who has a tendency to be reckless.

Hirose Alice as Takemura Haruko
Takemura Ririko’s younger sister. She helps out in the family business. She is on good terms with Ririko who talks to her about things such as work and romance. Despite her fluffy personality, she is also astute and gives Ririko sound advice when consulted by her sister on cases.

Terawaki Yasufumi as Umemiya Jo
The head of the Kounan branch of the Yokohama District Public Prosecutor’s Office. He has been sidelined from the career track, but is a dependable boss who is popular with his subordinates.

Namase Katsuhisa as Takemura Koichi
Takemura Ririko’s father. The owner of Takemura Tofu. A typical native Tokyoite, he has a deep sense of love and duty, and is easily moved to tears. He is anxious about the romances and marriages of his daughters who are of marriageable age.

This blog contains information and musings on current and upcoming Japanese dramas but is not intended to be comprehensive.
View all posts by jadefrost →
This entry was posted in NTV, Spring 2018 Dramas and tagged Hirose Alice, Namase Katsuhisa, Seigi no Se, Yasuda Ken, Yoshitaka Yuriko. Bookmark the permalink.