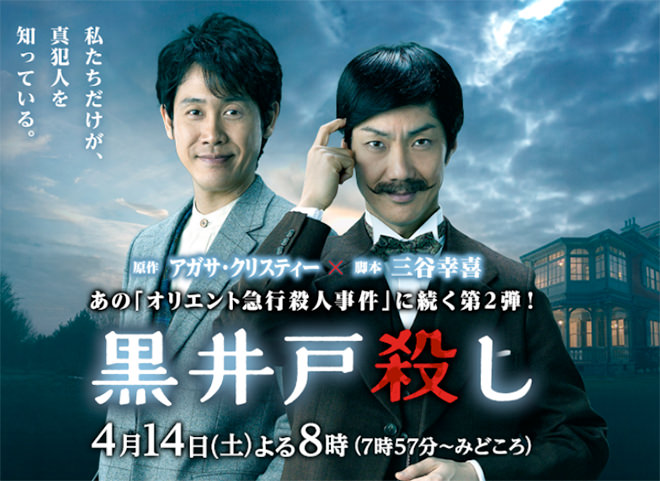 Date: From 8.00 p.m., 14 April 2018
Scriptwriter: Mitani Koki (Sanadamaru, Short Cut)
Original Work: The Murder of Roger Ackroyd by Agatha Christie
Cast: Nomura Mansai, Oizumi Yo, Mukai Osamu, Matsuoka Mayu, Akimoto Sayaka, Wada Masato, Terawaki Yasufumi, Fujii Takashi, Imai Tomohiko, Yoshida Yo, Asano Kazuyuki, Sato Jiro, Kusakari Tamiyo, Yo Kimiko, Saito Yuki, Endo Kenichi
Synopsis: In March 1952, Karatsu Sanako (Yoshida Yo), a wealthy widow, is found dead in her bedroom in a village in the remote countryside. Shiba Heisuke (Oizumi Yo), the only doctor in the village, visits the Karatsu residence from morning, in order to examine the body. The cause of death is determined to be an overdose of sleeping pills. Last year, Sanako was suspected of killing her husband with poison and Shiba’s eldest sister Kana (Saito Yuki) speculates that Sanako was tormented by guilt and committed suicide. Shiba’s good friend Kuroido Rokusuke (Endo Kenichi), who is the village’s wealthiest millionaire, is shocked by Sanako’s death because he had proposed to her. He invites Shiba to his house. When he is alone with Shiba after a meal with his niece Kuroido Hanako (Matsuoka Mayu), younger sister-in-law Kuroido Mitsuru (Kusakari Tamiyo), secretary Reizei Moichi (Terawaki Yasufumi), long-time friend Rando Goro (Imai Tomohiko), he reveals that Sanako had said she was being threatened by a man regarding her husband’s case. Then a note left by Sanako is delivered. Kuroido says that he wants to read it alone so Shiba leaves the mansion. On the way out, he passes a male stranger (Wada Masato) dressed in a war veteran’s uniform, and feels suspicious about the man as he goes home. Then, he gets a phone call from Kuroido’s butler Hakamada Jiro (Fujii Takashi), saying that Kuroido was murdered by someone. Shiba rushes over to the mansion. When he asks Hakamada, the butler does not remember making that phone call. Shiba has a bad feeling about this. When the lock to Kuroido’s room is dismantled and they enter, Kuroido is dead. He has been stabbed in the back with a dagger. After that, Inspector Sodetake Koshiro (Sato Jiro) arrives at the mansion and the investigation begins. When questions, the head servant Raisen Tsuneko (Yo Kimiko) states that she saw Kuroido’s step son Hyodo Haruo (Mukai Osamu), who is supposed to be in Tokyo, in the village. Because of that, Haruo is under suspicion. His fiancee Hanako intends to clear his name. Recalling that the intriguing man with no fixed employment, who moved next door to the Shiba family six months ago, is in fact the retired great detective Suguru Takeru (Nomura Mansai), Hanako’s heart is set on asking Suguru to investigate the case. She comes to consult Shiba about it. Although Shiba is less than thrilled, he asks Suguru. Suguru readily agrees to Hanako’s request and asks that Shiba be his partner. A reluctant Shiba joins him in the investigation and they visit the Kuroido residence with the police. Suguru hears from Inspector Sodetake that everyone who was in the Kuroido residence that night is a suspect and not just the missing Haruo. He obtains the statements of all the people related to the case including the maid Honda Asuka (Akimoto Sayaka). Then a series of baffling facts emerge. In the middle of this, Kuroido’s lawyer Hamose (Asano Kazuyuki) gets Kuroido’s relatives and related parties together and starts to talk about the inheritance. A shocking truth gets revealed … …
Official Website: www.fujitv.co.jp/kuroido

This blog contains information and musings on current and upcoming Japanese dramas but is not intended to be comprehensive.
View all posts by jadefrost →
This entry was posted in Fuji TV, Spring 2018 Drama Specials and tagged Endo Kenichi, Kuroido Goroshi, Mitani Koki, Oizumi Yo, Yo Kimiko, Yoshida Yo. Bookmark the permalink.