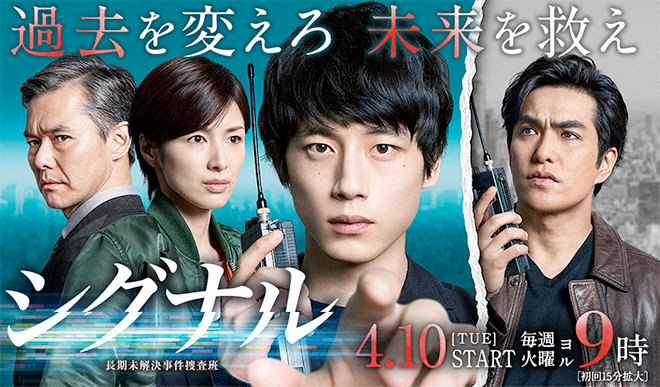 Story
15 years ago, a young girl was kidnapped on her way back from school. Saegusa Kento, who was a first grade elementary school student at that time, saw the girl being taken away. The police put a man on the wanted list and searched for his whereabouts. Although Kento told the police that the criminal was female, he was ignored by everyone. Several days later, the girl was found dead. Detectives Oyama Takeshi, Iwata Kazuo and others under Director Nakamoto Shinnosuke push on with the investigation. However, they could not obtain leads on the criminal. The case has remained unsolved for 15 years and the statue of limitation is approaching. Kento taught himself profiling and has become a police officer. However, he does not completely have faith in the police due to this past incident. As a result, senior detectives Sakurai Misaki and Yamada Tsutomu keep an eye on him. Then one night, Kento realises that someone has been calling him from a walkie-talkie which was supposed to have been disposed. The voice of the speaker is a detective named Oyama who addresses Kento as “assistant inspector” for some reason. He says he is pursuing the same case as Kento and he has a lead related to it. He visited a hospital based on Kento’s information and found the body of the man who was wanted for the kidnapping of the young girl, hanging there. Kento is not acquainted with Oyama and finds it hard to believe this sudden story. However, Oyama’s words that the man was used and killed and the real kidnapper is someone else, weighs on his mind. So Kento reluctantly heads to the hospital that he heard over the walkie-talkie. Although Oyama is not there, Kento discovers a skeleton just as he had been told. After that, Kento continues to communicate with that detective. He learns that the man is someone living in the past. The two of them begin to work together to crack unsolved cases through the mysterious walkie-talkie.

Characters
Sakaguchi Kentaro as Saegusa Kento
A police officer of the Tokyo Metropolitan Police Department’s Josai Police Precinct. When he was a child, his statement on a young girl whose abduction he witnessed was disregarded, and his older brother took his own life. These past incidents hurt him deeply and he has completely no faith in the police. He is level-headed, observant and has knowledge of profiling which he taught himself. He wants to find out the truth of his older brother’s case on his own but keeps this inner fervour to himself.

Kitamura Kazuki as Oyama Takeshi
A detective of Josai Police Precinct’s Criminal Investigation Division who communicates with Saegusa Kento through a walkie-talkie. He loathes injustice and becomes totally absorbed in investigations regardless of the honour of the police and conventions. That is why he got on the bad side of his superiors and repulsed the people around him. However, he investigates cases with a rigid sense of justice and convictions. One day, he was suddenly suspected of corruption and disappeared after that … …

Kichise Michiko as Sakurai Misaki
A detective of Josai Police Precinct who is partnered with Saegusa Kento. She is the leader of the unit that investigates cold cases which have gone unsolved for a long time. When she was a rookie, Oyama Takeshi was her instructor. She received strict lessons from him and matured into an outstanding detective. She is confident and cool but her desire to crack is stronger than anyone else. The kidnap and murder of the young girl led her to make the acquaintance of Kento when she worked at a police box within the jurisdiction of Josai Police Precinct.

Watabe Atsuro as Nakamoto Shinnosuke
The very powerful head of Criminal Investigations at the Tokyo Metropolitan Police Department. He has covered up for several politicians and large companies, and got to his present position through underhanded methods.

Komoto Masahiro as Iwata Kazuo
A unit chief of Josai Police Precinct. As a subordinate of the head of Criminal Investigations Nakamoto Shinnosuke, he keeps an eye on Saegusa Kento and Sakurai Misaki who attempt to expose the secrets of a past case. He had investigated it in the past together with Oyama Takeshi, but some incident led him to lend Nakamoto a hand.

This blog contains information and musings on current and upcoming Japanese dramas but is not intended to be comprehensive.
View all posts by jadefrost →
This entry was posted in Fuji TV, Spring 2018 Dramas and tagged Kitamura Kazuki, Ozaki Masaya, Sakaguchi Kentaro, Signal Series, Watabe Atsuro. Bookmark the permalink.