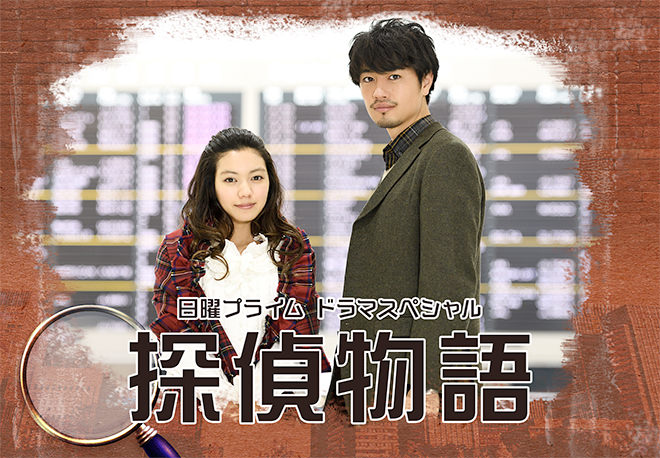 Date: From 9.00 p.m., 8 April 2018
Scriptwriter: Kuroiwa Tsutomu (Juuyou Sankonin Tantei, Kizoku Tantei, Boku no Yabai Tsuma)
Original Work: Tantei Monogatari by Akagawa Jiro
Cast: Saito Takumi, Nikaido Fumi, Natsuki Mari, Fukikoshi Mitsuru, Masana Bokuzo, Hasegawa Kyoko, Kunimura Jun, Shonozaki Ken, Inaba Yu, Yamamoto Ai, Suzuki Takayuki, Yamamshita Yorie, Okouchi Hiroshi
Synopsis: Tsujiyama Shuichi (Saito Takumi), a former First Investigative Division detective, is a penniless sleuth whose main work is now trivial cases such as investigating infidelity. One night, he takes photos of his target at the decisive moment while pursuing such a case. However, he has the unfortunate luck to be mistaken by a well-off university student Arai Naomi (Nikaido Fumi) for secretly taking photos of her underwear. In the course of scuffling with each other, his camera’s SD card is damaged. Tsujiyama’s source of income not only falls through, his client is angered and he has a hard time. Hasenuma Kimie (Natsuki Mari), the housekeeper who has been serving Naomi’s family for close to 30 years, comes to visit Tsujiyama. She apologises for Naomi’s rudeness. At the same time, she asks him to become Naomi’s bodyguard. Naomi will be going to study abroad in New York in five days but she seems to be staying out late night after night. Furthermore, she has been stalked by her ex-boyfriend Miyoshi Toma (Inaba Yu) lately. In the end, Tsujiyama agrees to be her bodyguard for five days. Expecting it to be an easy job, he is a wee bit smug as he begins to hang about with the tomboyish Naomi. However, the situation dramatically changes after one phone call. The caller is detective Takamine Kiyohito (Fukikoshi Mitsuru) whom Tsujiyama had investigated a case together six years ago when he was still with the First Investigative Division. Tsujiyama’s ex-wife Motomiya Sachiko (Hasegawa Kyoko) is suspected of murdering Yashiro Kazuya (Yamamoto Takeshi). Yashiro is the son and heir of Kunizaki Narimichi (Kunimura Jun), the chairman of Kunizaki Industries which is rumoured to have links with organised crime groups. To compound matters, Sachiko might have been in relationships with both Kunizaki and Kazuya after she and Tsujiyama divorced. Tsujiyama only half believes it. But the truth remains unknown while Sachiko is on the run. Kunizaki who has been searching for Sachiko’s whereabouts in an attempt to kill her, makes contact with Tsujiyama. On the other hand, Naomi is very interested in the case after hearing all the details from Tsujiyama. She suggests that they find the real criminal and save Sachiko from Kunizaki. Tsujiyama ends up investigating the truth about the case with Naomi. Then a second murder occurs … …
Official Website: www.tv-asahi.co.jp/tanteimonogatari

This blog contains information and musings on current and upcoming Japanese dramas but is not intended to be comprehensive.
View all posts by jadefrost →
This entry was posted in Spring 2018 Drama Specials, TV Asahi and tagged Fukikoshi Mitsuru, Hasegawa Kyoko, Kunimura Jun, Natsuki Mari, Nikaido Fumi, Saito Takumi, Tantei Monogatari. Bookmark the permalink.