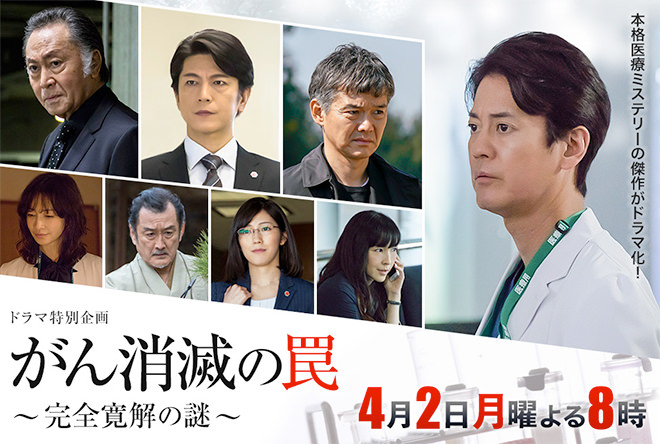 Date: From 8.00 p.m., 2 April 2018
Scriptwriters: Yoshimoto Masahiro (Keishichou Zero-gakari Series, Onna no Naka ni Iru Tanin, Bokura Playboys Jukunen Tanteisha), Funabashi Tsutomu (Ito-kun A to E, Keishichou Zero-gakari Series)
Original Work: Gan Shoumetsu no Wana ~ Kanzen Kankai no Nazo by Iwaki Kazuma
Cast: Karasawa Toshiaki, Watabe Atsuro, Oikawa Mitsuhiro, Aso Kumiko, Watanabe Mayu, Shibamoto Yuki, Tezuka Toru, Kato Toranosuke, Katsuno Hiroshi, Yoshida Kotaro (guest star), Ryou, Kitaoji Kinya
Synopsis: Natsume Noriaki (Karasawa Toshiaki) is a pulmonologist at Nihon Cancer Centre which provides the country’s best cancer treatment. A serious and sincere man, he is an outstanding doctor who has a good reputation with colleagues as well as patients. On the other hand, his eccentric colleague Hashima Yuma (Watabe Atsuro) does not do any clinical practice. He is absorbed in research and keeps other doctors at arms length. The two men have been good friends since high school dates. Natsume is undeterred by Hashima who is not good with the people around him. He values Hashima’s wealth of knowledge as a doctor and often seeks his advice. On this day, Natsume consults Hashima about the mystery of the disappearance of terminal cancer in a patient he is in charge of. The patient, Kogure Mari (Shibamoto Yuki), had adenocarcinoma of the lung which spread. At the point that Natsume took charge, he diagnosed that she had six months to live and no hope of getting cured. She even received the living benefit payment for her life insurance. However, six months later, Mari’s cancer is completely gone. While Natsume and Hashima do not believe in miracles, they are at a loss to explain the reason for its complete remission. Meanwhile, other people question Mari’s cancer remission. They are Morikawa Yuichi (Oikawa Mitsuhiro), a former high school classmate of Natsume and Hashima who works for a life insurance company’s investigation department, and Morikawa’s subordinate Mizushima Ruriko (Watanabe Mayu). Morikawa and Ruriko have questions on three points and raise the possibility of insurance fraud to Natsume. Firstly, Mari had developed cancer just eight months after she took out the life insurance policy. Secondly, she had bought an expensive policy in comparison to her personal income. Lastly, the complete remission of her cancer. In the midst of this, yet another patient of Natsume beats cancer. Like Mari, this patient Yokoyama Munehiko (Minosuke) had end-stage adenocarcinoma of the lung. His cancer which is considered impossible to completely cure, went into complete remission after he collected the living benefit payment for his life insurance policy. Even the police suspect Mari and Yokoyama of insurance fraud and Natsume is ordered by the centre to stay at home. An unhappy Natsume goes after the mystery of the cancer remission on his own. Is this a medical miracle? Or someone’s scheme? Then a murder occurs and Natsume is pursued by the police. He notices the presence of an up-and-coming hospital behind this case. It is Wangan Medical Centre, a hospital which his wife Saki (Aso Kumiko), a freelance writer, has been investigating. Ugaki Rena (Ryou), a doctor from the centre, turns up before Natsume and Hashima as they follow the case, and it seems that she has some connection with the patients whose cancer went into complete remission. Natsume’s mentor Saijo Seishiro (Kitaoji Kinya) also shows up. Despite their strong bond, he had disappeared from Natsume’s sight right after his daughter died of cancer 20 years ago. What are the hidden facts of this case?
Official Website: www.tbs.co.jp/gan_shoumetsunowana

This blog contains information and musings on current and upcoming Japanese dramas but is not intended to be comprehensive.
View all posts by jadefrost →
This entry was posted in Spring 2018 Drama Specials, TBS/MBS and tagged Aso Kumiko, Gan Shoumetsu no Wana, Karasawa Toshiaki, Kitaoji Kinya, Oikawa Mitsuhiro, Watabe Atsuro, Yoshida Kotaro. Bookmark the permalink.