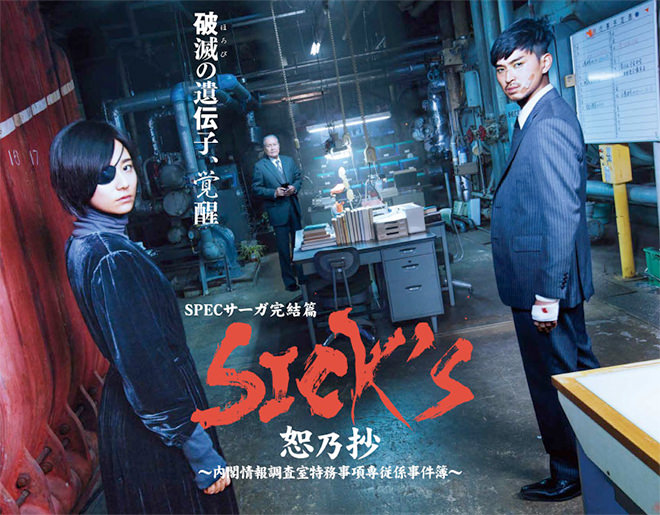 Story
Mikuriya Suzuru is a genius with an IQ of 230 and a graduate from Harvard University. However, she has been hospitalised for the habit of harming herself because she is mentally unstable. She wears an eye patch on her right eye and has been warned by the doctor not to take it off. Takakura Hiroyo was a detective of the Tokyo Metropolitan Police’s Public Security Department. But he was forced to leave the department after a case involving a SPEC holder. He is honest to a fault due to his strong sense of justice, and there are also times when he cannot fit in with the people around him and with the organisation. Mikuriya and Takakura belong to the Tokumu, a unit in the Cabinet Intelligence and Research Office which is headed by Nonomura Kojiro and deals with SPEC holders. A fight over SPEC holders develops into conflict between countries including Japan and a power struggle which embroils religious organisations and even the Self-Defence Forces. Sandwiched by their purpose of trying to gain control of the SPEC holders, Mikuriya and Takakura put up a fight together with Nonomura. This is where a mysterious presence in a black sailor suit, Ninomae Ito, appears. Her relationship to Ninomae Juuichi is shrouded in mystery. Is she an enemy or an ally?

This blog contains information and musings on current and upcoming Japanese dramas but is not intended to be comprehensive.
View all posts by jadefrost →
This entry was posted in Spring 2018 Dramas, TBS/MBS and tagged Kimura Fumino, Matsuda Shota, Ryu Raita, SPEC Series. Bookmark the permalink.