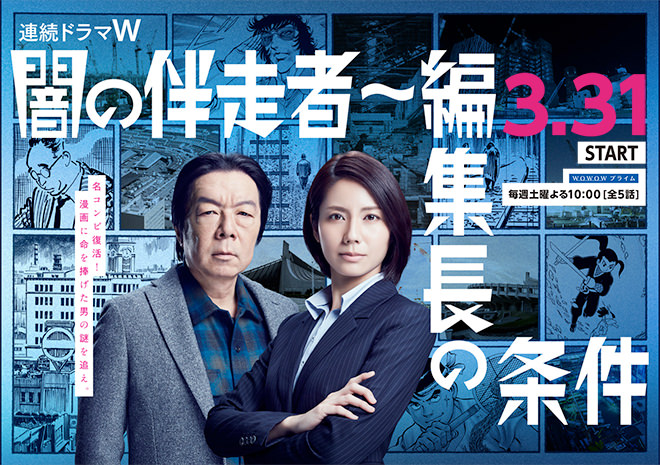 Story
Mizuno Yuki, a former police officer who is now an investigator, gets another investigation request from Ajima Yoshiko, the company president of Ajima Pro. The sketches by her late husband Fumiya, the master of manga, have been returned. But the sender Nanbu Masaharu, a legendary manga editor who once took the world by storm, plunges to death from a building rooftop right after that. The police quickly classify it as an accident because there is no suicide note or reason to suspect foul play. However, there are many riddles surrounding his death. His editorial staff and the people around him say he deserved to be killed. Was Nanbu’s death a murder or a suicide? Yoshiko wants Yuki to investigate if the sketches have any connection. Yuki teams up with Daigo Shinji, who happened to replace Nanbu as the manga editor, again to solve Nanbu’s death. Their clue is an old manga manuscript by an anonymous author which the late manga editor left behind. The two of them pursue the investigation and eventually get to the unsolved Shimoyama case which was the biggest post-war mystery.

Characters
Furuta Arata as Daigo Shinji
The new chief editor of Manga Brave. He is a difficult and eccentric person. His impassive face and bad habit of glaring at another person probably give the worst first impression. He was once a manga editor at the big publishing company, Eijinsha, but resigned to strike out on his own. No one has as extensive a knowledge of manga as he does. He accepts the job of chief editor of Manga Brave despite his hesitation.

Matsushita Nao as Mizuno Yuki
An investigator of publishing-related A native of Sendai and a former police officer of the Miyagi Prefectural Police. She is diligent and has a strong sense of justice. She is oblivious to her surroundings when she becomes focused on an investigation. Three years ago, she and Daigo Shinji, who was a freelancer at the time, solved the mystery of the sketches left behind by the late manga writer Ajima Fumiya.

Shiraishi Shunya as Ito Shota
A part-time editorial assistant. His aspiration is to be an editor because he loves manga. However, he was unsuccessful in his job search and has been working part-time at Soukisha. He is typical young man of the “relaxed generation” and is deeply attached to the manga, One Piece. He supports the investigation of Mizuno Yuki and Daigo Shinji by taking instructions from Daigo.

Iwamatsu Ryo as Nanbu Masaharu
The former editor of Manga Brave. He produced a string of hits in the manga magazine of the large publisher Houousha and became a legendary chief editor. 10 years have passed since he retired. He takes the position of chief editor once again at Soukisha. He is a genius with a way with words. When he is drunk, he would put the other party down and make people feel annoyed.

Fuke Norimasa as Shono Takayuki
The CEO of Kiwisha and Nanbu Masaharu’s junior during his Houousha days. He became the CEO of editorial production company Kiwisha instead of Nanbu because Nanbu firmly declined the appointment. They were considered to be on bad terms by the people around them. He proposed some wish to Nanbu when Nabu was still alive.

Hashizume Jun as Tsukamoto Sousuke
Nanbu Masaharu’s junior during his Houousha days. He has been teaching a course on manga at an arts college after retiring from Houousha. He and Nanbu quarreled constantly but he also respected him. He understands how great Nanbu was as an editor.

Yagi Akiko as Nanbu Kayoko
Nanbu Masaharu’s wife. They have been living apart and have practically not met each other ever since he retired. She seems candid and compassionate. She describes Nanbu as “broadminded but a coward, sincere but a liar”.

Mano Kyoko as Ajima Yoshiko
The wife of the late Ajima Fumiya and the current president of Ajima Pro. She has the impression that Mizuno Yuki is a sleuth and asks her to investigate whether Nanbu Masaharu’s death is connected to Ajima’s sketches.

Tanaka Min as Menjo Keizo
An “illusory” manga artist who disappeared after the war. Both his drawing and storytelling abiliies were topnotch. Half of his life was full of ups and downs. He is deeply linked to the truth of Nanbu Masaharu’s death.

Hiraizumi Sei as Ogi Toshikatsu
The second generation CEO of Soukisha. He wa very autocratic in the past but now he pays heed to his son Toshinori, who is the managing director. He invites Daigo Shinji to be the chief editor of Manga Brave which is falling sharply in circulation.

This blog contains information and musings on current and upcoming Japanese dramas but is not intended to be comprehensive.
View all posts by jadefrost →
This entry was posted in Spring 2018 Dramas, WOWOW and tagged Furuta Arata, Yami no Bansosha Series. Bookmark the permalink.