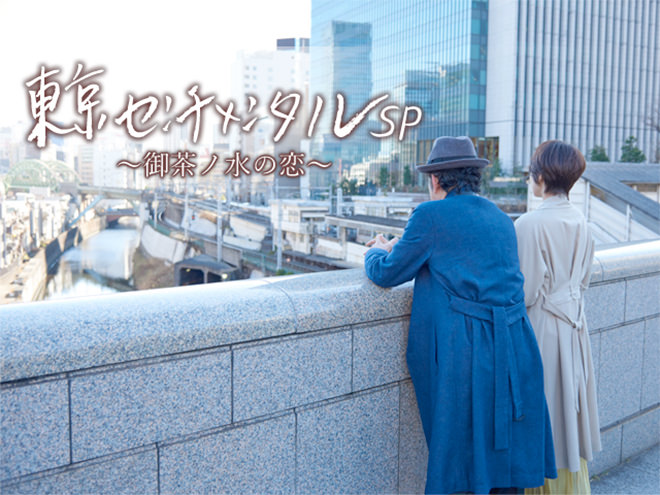 Date: From 12.12 a.m., 31 March 2018
Scriptwriter: Matsumoto Tetsuya
Cast: Yoshida Kotaro, Takahata Mitsuki, Katagiri Jin, Yamada Jundai, Abe Junko, Tamashiro Tiffany, Aoyagi Sho, Kichise Michiko
Synopsis: Kururi Takuzo (Yoshida Kotaro) is the third-generation owner of a traditional Japanese confectionery shop ‘Kururiya’ in Kototoibashi, Tokyo. His skills as an artisan making the shop’s signature dango are good. But in his personal life, he is thrice-divorced. He cannot help himself when it comes to women despite being all of 56. He gets told off by his part-timer Sudo Akane (Takahata Mitsuki) as he leads a carefree bachelor’s life. Takuzo’s hobby is to go for walks in town with the antique single-lens reflex camera that his father bought for him when he was a child, and capture the scenery of the good old-fashioned Tokyo which will change someday. One day, Shibata Kokichi (Katagiri Jin) who runs the barbershop opposite Kururiya, brings his girlfriend Karina (Tamashiro Tiffany) over. He says they met at a cooking class and started dating. Annoyed by looks that Shibata gives, Takuzo begins to attend cooking classes in Ochanomizu with the objective of “broadening his range as an artisan”. He loses his heart to the beautiful teacher Akimoto Kaede (Kichise Michiko). When he and another student Takagi Hiroshi (Yamada Jundai) are having an animated conversation with her, a handsome student Masuda Shinnosuke (Aoyagi Sho) gets angry and tells them to concentrate. And Fujii Yui (Abe Junko) stares at Masuda from afar. There is a atmosphere between Masuda and Kaede but Takuzo is unable to read the mix of interpersonal relationships in the classroom … …
Official Website: www.tv-tokyo.co.jp/tokyo_sentimental

This blog contains information and musings on current and upcoming Japanese dramas but is not intended to be comprehensive.
View all posts by jadefrost →
This entry was posted in Spring 2018 Drama Specials and tagged Tokyo Sentimental Series, Yoshida Kotaro. Bookmark the permalink.