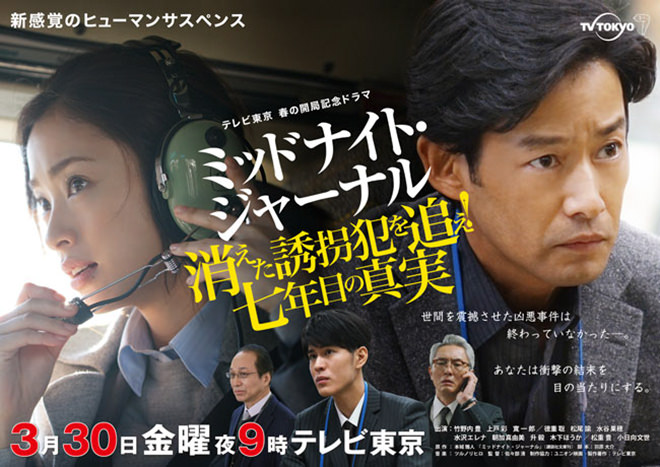 Date: From 9.00 p.m., 30 March 2018
Scriptwriter: Habara Daisuke (Godan, Double Face, Beautiful Rain)
Original Work: Midnight Journal by Honjo Masato
Cast: Takenouchi Yutaka, Ueto Aya, Kanichiro, Tokushige Satoshi, Matsuo Toru, Mizutani Kaho, Mizusawa Erena, Asaka Mayumi, Masu Takeshi, Kinoshita Houka, Matsushige Yutaka, Kohinata Fumiyo
Synopsis: Chuo Shimbun reporters Sekiguchi Gotaro (Takenouchi Yutaka) and Fujise Yuri (Ueto Aya) incorrectly reported that the baby girl of a victim in a serial kidnap-murder case which shocked the public, died. Gotaro was relegated to a branch office while Yuri was made a roving reporter. Transferred from place to place in the seven years since the brutal crime, he is now in the Saitama office under Suga Makoto (Masu Takeshi). Suga is the editor of the local news section. Gotaro has the habit of saying “Readers hope that the facts are quickly and accurately reported. That’s a journalist”. He chastises rookie reporter Okada Shota (Kanichiro) as he continues to quietly pursue cases. At this time, a second baby girl is abducted. The facts found in Okada’s investigation leads Gotaro to suspect that it is connected to the serial kidnap-murder case seven years ago. At the time of the incident, Gotaro and others had argued that there were two criminals. So there was an accomplice in the case. Was the accomplice who escaped seven years ago behind the kidnapping this time? The thought that the case has not been solved, spurs Gotaro to contact his ex-boss Toyama Yoshimasa (Kinoshita Houka) who has become the head of the local news division at headquarters. However, the request for backup from headquarters to the Saitama office is ignored. Knowing about Gotaro’s past, it is difficult for even Tsujimoto Tsuyoshi (Tokushige Satoshi), Inoue Misa (Mizusawa Erena) and Kato Takuzo (Matsuo Toru) at the headquarters to go. Only Yuri volunteers. She goes to question Nikaido Minoru (Kohinata Fumiyo), a former Tohto Shimbun reporter who moved to Chuo Shimbun three years before. He is in charge of the Tokyo Metropolitan Police Department. However, he denies the connection to the case seven years ago. Meanwhile, Gotaro visits the residence of Yamagami Mitsuaki (Matsushige Yutaka), the director of Saitama Prefectural Police, in order to obtain information on the serial killings. He learns that a third kidnapping occurred in Adachi ward. Meanwhile, Yuri is under pressure from Toyama and the reporters of the local news division at the headquarters. But Gotaro’s words about being focused on people’s lives and not a scoop, motivates her to continue the investigation. With the pride of reporters, they overcome all sorts of obstacles and start to get to the truth … …
Official Website: www.tv-tokyo.co.jp/midnight_journal

This blog contains information and musings on current and upcoming Japanese dramas but is not intended to be comprehensive.
View all posts by jadefrost →
This entry was posted in Spring 2018 Drama Specials, TV Tokyo and tagged Midnight Journal, Takenouchi Yutaka. Bookmark the permalink.