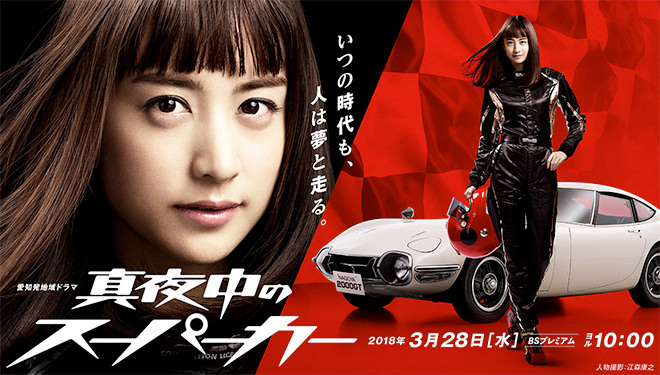 Date: From 10.00 p.m., 28 March 2018
Scriptwriter: Aikawa Sho
Cast: Yamamoto Mizuki, Katono Taiko, Omori Hiroshi, Megumi, Fukazawa Atsushi, Mizuki Ichiro, Dan Jiro, Karasawa Toshiaki
Synopsis: Nagoya Motors, the world’s biggest car manufacturer in Aichi Prefecture’s Toyota City, is known far and wide. Shirayuki (Yamamoto Mizuki) joined the company three years ago and is still a trainee car designer. Among the many females in charge of car interiors and colour palettes, she fixated on the design of the outer form. Shirayuki dreams of creating a super car which will surpass the legendary Nagoya 2000GT some day. But the trend now is well-designed, feature-packed and safe family cars. Believing that the pleasure of driving is the real joy of a car, Shirayuki clashes with her boss. As a result, she is fired as a designer and ordered to transfer to the self-driving car development department. However, a dejected Shirayuki thinks that if she is to create cars which take away the job of driving, she wants to resign. She visits Nagoya Motors Museum where well-known cars from all ages and countries are exhibited. Shirayuki intently draws the Nagoya 2000GT without realising that it is past the museum’s closing time. A security guard (Omori Hiroshi) mysteriously says it is dangerous at night and urges her to go home quickly. Shirayuki learns that Ricardo (Katono Taiko), a fourth-generation Japanese Brazilian who had hidden from the security guard’s view, is planning to steal the Nagoya 2000GT and tries to stop him. Then a man in a white racing suit (Karasawa Toshiaki) appears in the driving seat of the Nagoya 2000GT all of a sudden. He begins to show a different side of the museum in the middle of the night by awakening the spirits of the cars one by one with his magical power. Will Shirayuki and Ricardo who have been confined in the night museum be able to safely return to their world?
Official Website: www.nhk.or.jp/nagoya/supercar

This blog contains information and musings on current and upcoming Japanese dramas but is not intended to be comprehensive.
View all posts by jadefrost →
This entry was posted in NHK, Spring 2018 Drama Specials and tagged Karasawa Toshiaki, Mayonaka no Super Car. Bookmark the permalink.