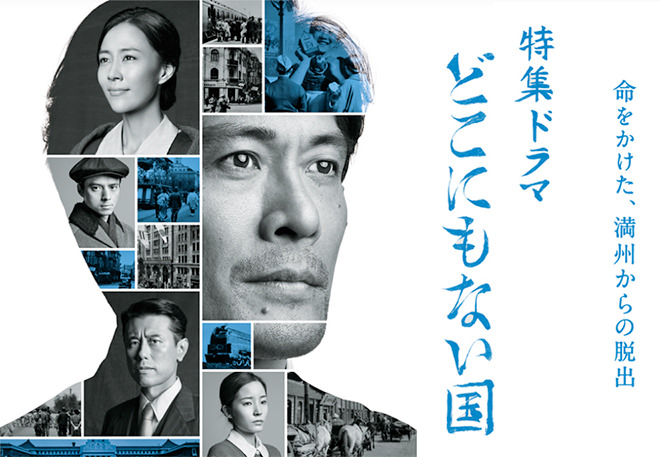 Date: From 9.00 p.m., 24 & 31 March 2018
Scriptwriter: Omori Sumio (Seirei no Moribito Series, Frankenstein no Koi, Nezumi Edo o Hashiru Series)
Original Work: Escape from Manchuria by Paul Kuniaki Marayama
Cast: Uchino Masaaki, Kimura Yoshino, Harada Taizo, Renbutsu Misako, Mitsushima Shinnosuke, Kataoka Tsurutaro, Hagiwara Kenichi
Synopsis: It is August 1945 in Manchuria. Maruyama Kunio (Uchino Masaaki) is robbed of everything he has by the invading Soviet Occupation troops. Faced with the realities of Japan’s war defeat, Maruyama is at a loss for how to protect his wife Mariko (Kimura Yoshino) and their children. Looting and seizure of assets become routine. Many Japanese civilians are attacked in the course of fleeing. This is compounded by the lack of nutrition and spread of contagious diseases which leads to a wave of deaths. And so, 1.5 million Japanese in Manchuria lose their lives. Maruyama decides to appeal to his homeland to repatriate them to Japan. Together with Shinbo Yachiro (Harada Taizo) and Muto Masamichi (Mitsushima Shinnosuke), he works out a plan to escape Manchuria. A dream team is born – Shinbo, the president of a construction company is wealthy and has nerves of steel; Muto is proficient in Chinese and privy to the situation on the ground; Maruyama is strong in English and has a firm conviction. Mariko supports Maruyama’s decision but Shinbo’s wife Matsu (Renbutsu Misako) is anxious about their daredevil plan. Leaving their families behind, the three men finally begin their escape. Will they be able to overcome numerous perilous situations and find their way to Japan?
Official Website: www4.nhk.or.jp/P4600

This blog contains information and musings on current and upcoming Japanese dramas but is not intended to be comprehensive.
View all posts by jadefrost →
This entry was posted in NHK, Spring 2018 Drama Specials and tagged Doko ni mo Nai Kuni, Harada Taizo, Kimura Yoshino, Mitsushima Shinnosuke, Renbutsu Misako, Uchino Masaaki. Bookmark the permalink.