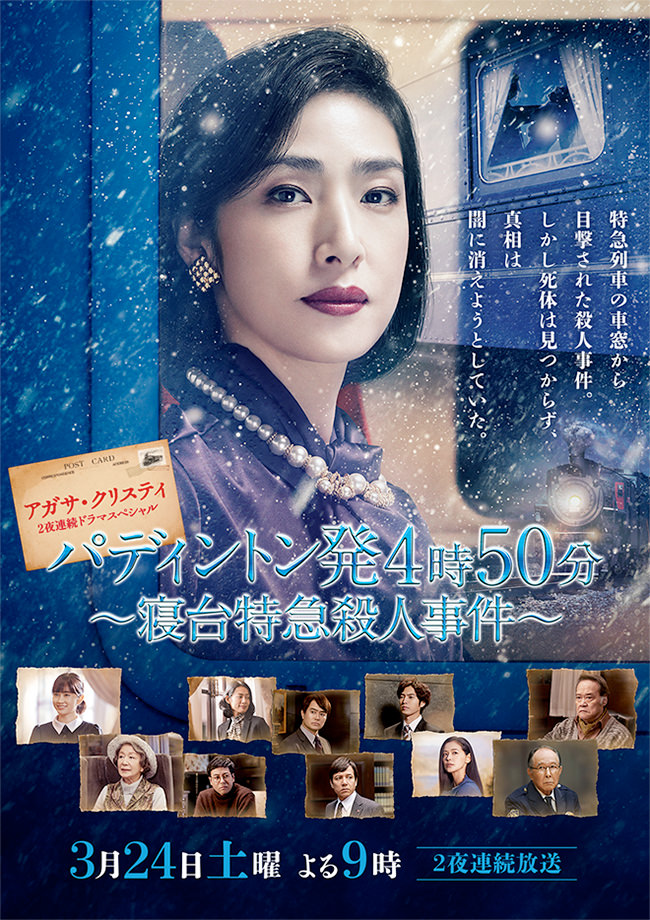 Date: From 9.00 p.m., 24 March 2018
Scriptwriter: Takeyama Yo (Kokuhatsu, Yakkou no Kaidan)
Original Work: 4.50 from Paddington by Agatha Christie
Cast: Amami Yuki, Kusabue Mitsuko, Maeda Atsuko, Ishiguro Ken, Katsumura Masanobu, Hara Sachie, Suzuki Kosuke, Kiriyama Ren, Kurotani Tomoka, Hashizume Isao, Nishida Toshiyuki
Synopsis: One afternoon, a woman in sunglasses rides the Asagiri sleeper express. Her objective is to search for a dead body which has disappeared. This woman’s name is Amano Toko (Amami Yuki). Toko used to be an ace detective but resigned to look after her husband who suffered from cancer. After he passed away, she became a crisis management professional and took up a post as a consultant to private companies. In fact, three days earlier, Toko’s mother-in-law Amano Suzume (Kusabu Mitsuko) was on board the express train Orion when she saw a man strangle a woman in the Asagiri sleeper express which was running side by side. Although she immediately reported this to the train conductor, he believed she was half asleep and brushed it off. After that, the local police inspected the railway line to make sure but the dead body was no found. After hearing her mother-in-law’s complaint, an indignant Toko announces that she will bring a charge against the police in order to clear her name. She promptly begins investigating and boards the Asagiri sleeper express at the same time to search for clues. Detecting her movements, Inspector Karaki (Katsumura Masanobu) and detective Suzuki (Kiriyama Ren) come to keep her in check. But Toko does not care. She deduces that right after the murderer killed the woman, he opened a window in the train and tossed the dead body out. She believes the body was thrown into the grounds of the mansion of Tomizawa Shinsuke (Nishida Toshiyuki), the CEO of a confectionery company, which lies next to the railway tracks. And so she instructs the housekeeper Nakamura Aya (Maeda Atsuko), who is an acquaintance, to infiltrate Tomizawa’s residence. Tomizawa lives with his eldest daughter Keiko (Hara Sachie) and butler Oyama Masaru (Shimada Kyusaku). His second son Tetsuji (Suzuki Kosuke), third son Seizo (Niiro Shinya), late second daughter’s husband Furukawa Susumu (Yashiba Toshihiro) and his physician Saeki Keiichi (Ishiguro Ken) come and go sometimes. The well-known Aya is immediately hired by the Tomizawa residence as a super housekeeper and begins to search for the dead body as she does the housework with great skill. Then another murder occurs … … Will Toko be able to get to the truth of the case?
Official Website: www.tv-asahi.co.jp/agathachristie/paddington.html