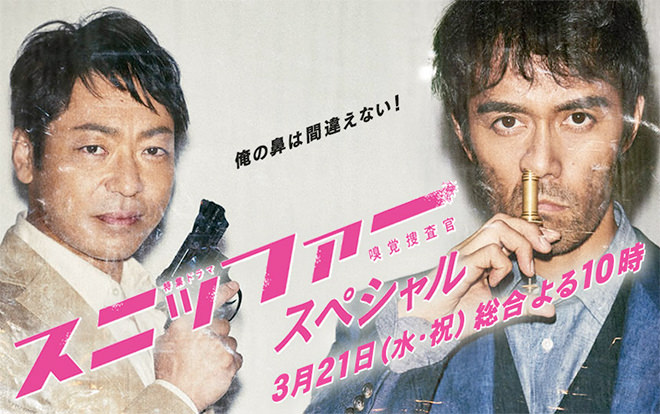 Date: From 10.00 p.m., 21 March 2018
Scriptwriter: Hayashi Koji (I’m Home, Iryu ~ Team Medical Dragon Series)
Original Work: The Sniffer by Film.UA
Cast: Abe Hiroshi, Kagawa Teruyuki, Igawa Haruka, Itaya Yuka, Nomaguchi Toru, Takahashi Maryjun, Baba Toru, Takemori Sento, Mizutani Kaho, Haru, Maruyama Tomomi, Nishimura Masahiko, Matsuo Suzuki, Yoshiyuki Kazuko
Synopsis: A series of mysterious murders occur where the dead bodies are decorated with flower petals. Investigator Hanaoka Shinichiro (Abe Hiroshi) sniffs a strange smell like that of bacterial culture from the dead bodies. He has a superhuman sense of smell and helps in solving cases by smelling the scents left behind at crime scenes. Once he takes a sniff, he will know the person’s age, gender, what he or she ate and even lifestyle. Meanwhile, Komukai Tatsuro (Kagawa Teruyuki) who had been Hanaoka’s partner, is suddenly dropped from the investigation team and FBI-trained profiler Shichijo Kana (Haru) joins the team in his place. Komukai proceeds with his own investigation but is abducted by a mysterious man and confined. Hanaoka visits a former research colleague Iwabuchi Yukio (Matsuo Suzuki) who specialises in microbiology, in an attempt to identify the scent he smelled from the dead bodies. The possibility of bio-terrorism from biological weapons emerges. Will Hanaoka be able to prevent bio-terroism as the motives of the men – Saeki Seiji (Maruyama Tomomi), a man who lost his family to the harmful side effects of a drug, and Fujimori Taizo (Nishimura Masahiko), the former Minister of Health, Labour and Welfare who has designs on becoming the next prime minister – pulling the strings behind the scenes get entangled?
Official Website: www.nhk.or.jp/dsp/sniffersp

This blog contains information and musings on current and upcoming Japanese dramas but is not intended to be comprehensive.
View all posts by jadefrost →
This entry was posted in NHK, Spring 2018 Drama Specials and tagged Abe Hiroshi, Haru, Itaya Yuka, Kagawa Teruyuki, The Sniffer ~ Kyuukaku Sousakan. Bookmark the permalink.