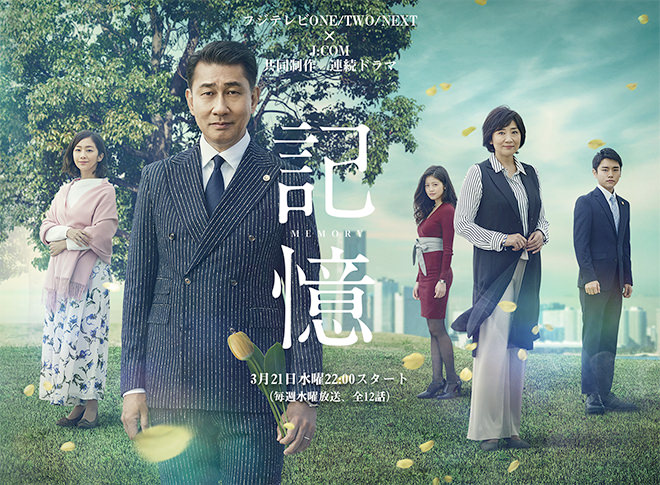 Story
Honjo Hidehisa, a successful lawyer in his 50s, has been forgetting a lot of things lately. He is assigned by Katagiri Keisuke, the head of the law firm, to handle the medical malpractice case of client Sakuraba Memorial Hospital and given rookie lawyer Ninomiya Masaki as his assistant. The hospital’s deputy director Sakuraba Takayuki wants Honjo to silence the doctor Mayama who is trying to blow the whistle, and do this quietly. Worried about the health of his mother who is living alone, Honjo visits her. When he returns home, his wife Haruka is waiting. She tells him to come back earlier for their son Kazuya’s birthday tomorrow. The next day, Honjo obtains information that Mayama has Alzheimer’s and he uses this to drive him into a corner. That night, Honjo gets drunk and mistakenly visits the house of his ex-wife Shinohara Kanako who rages at him. This day is the death anniversary of their young son who died in a car accident 15 years ago. The culprit still has not been caught. It is the one incident he wishes to forget. Honjo has not faced up to the past until now. He has only thought of work and neglected his new family. But as he gradually begins to lose his memories due to the early onset of Alzheimer’s, he devotes his remaining life to exposing his past and taking on his final case.

Characters
Nakai Kiichi as Honjo Hidehisa
An ace lawyer who works for the law firm Katagiri. When he was a child, his father abandoned the family and ran away from home. After that, he was brought up by his mother. Because of this humble background, he wanted to be a person that his family can be proud of. He worked his way through school and became a lawyer. However, 15 years ago, his young son Ryosuke died in a hit-and-run accident. Ever since his bitter experience of losing to police authority and being unable to solve the case, he transformed into a crafty lawyer who would do whatever it takes to win. He has become a famous person who even appears on TV. He and his wife Kanako divorced after the accident. Then he got married to Haruka and had a boy and girl. He is busy with work and neglects his family. But he is given a shocking diagnosis of Alzheimer’s by his good friend Sawashima Mitsuru who is a neurologist.

Yuka as Honjo Haruka
Honjo Hidehisa’s second wife. She has a son Kazuya who is junior high school student and daughter Hinata who is a kindergartner with him. She used to be a nurse at the university hospital where Sawashima Mitsuru works and that is how she met Honjo. After they got married, she quit her job to focus on raising their children and housework. She knows Honjo is divorced and the son he had with his first wife died in an accident. However, she is a gentle wife who does not show jealousy but quietly watches over them.

Matsushita Yuki as Shinohara Kanako
Honjo Hidehisa’s ex-wife. An associate professor of a graduate school of law. She and Honjo met in the faculty of law and got married. They led a happy life. But 15 years ago, their young son Ryosuke died in a hit-and-run accident. She regrets that the criminal was not found and the case was never solved. A rift formed between her as she remained caught up in the past while Honjo tried to move on with life, and they got divorced the following year. Honjo secretly wishes that she will lead her own life. Then one day, a bouquet of flowers is placed at the scene of the accident and she swings into action once again to catch the criminal. She now lives alone in the home where she used to live with Honjo and Ryosuke.

Izumisawa Yuki as Ninomiya Masaki
A rookie lawyer who works for the law firm Katagiri. He burns with the justice and idealism of youth. Wanting to become an outstanding lawyer like Honjo Hidehisa, he joined the law firm and is made his assistant just as he wished. But he sees Honjo’s methods to do whatever it takes to win, he is disappointed and disdainful. However, after he catches a glimpse of the kind person beneath, he slowly becomes friendly.

Ishimaru Kenjiro as Katagiri Keisuke
The head of the law firm Katagiri. He is a former public prosecutor turned lawyer. He picked Honjo Hidehisa who had been depressed after the death of his son in the accident, for his newly established firm and has been looking out for him. To Honjo, he is the benefactor who enabled him to make it to the big time.

Moro Morooka as Sawashima Mitsuru
Honjo Hidehisa’s good friend. A neurologist. They were classmates who grew up together in their hometown, and he had supported Honjo who worked hard despite his humble background. He is the only person to whom Honjo can say anything and is also the one who introduced the divorced Honjo to Haruka. After Honjo is diagnosed with an early onset of Alzheimer’s, he gives him moral support.

Onishi Takeshi as Mikami Katsuhiko
A detective of Yokohama Nishi Police Precinct. He headed the scene of the hit-and-run accident 15 years ago. The investigation ended without identifying the criminal. Honjo Hidehisa and Shinohara Kanako hate him for his lack of sincerity in handling the case.

Maruyama Tomomi as Sakuraba Takayuki
The deputy director of Sakuraba Memorial Hospital. His father Akimasa is the hospital director and his younger brother Tomohiro is a surgeon. He has admirable management skills but because of his sense of privilege as the heir of the hospital, he flies into a rage easily and frequently causes problems. Whenever that happens, he cover up the problem through the law firm Katagiri.

Otaka Akira as Sakuraba Akimasa
The director of Sakuraba Memorial Hospital who makes use of money and influence to suppress everything that is inconvenient to the family. He is pleased with Honjo Hidehisa’s skills as a lawyer.

Kawano Naoki as Sakuraba Tomohiro
A surgeon at Sakuraba Memorial Hospital. The second son of Sakuraba Akimasa. A timid character who cannot solve problems on his own and always has to rely on his older brother Takayuki. However, even he is fearful of Takayuki’s personality.

Aijima Kazuyuki as Kadowaki Kenji
A freelance magazine reporter. He has been investigating the hit-and-run accident that happened 15 years ago. He is interested in the internal affairs of Sakuraba Memorial Hospital and after he learns that Honjo Hidehisa is its legal adviser, he approaches Honjo again.

Yamanaka Takashi as Okudera Yoshinori
A detective of Kawasaki Minato Police Precinct. He is investigating the suicide of a doctor at Sakuraba Memorial Hospital. He feels that something is being covered up inside the hospital and clashes with Honjo Hidehisa who is the legal adviser.

This blog contains information and musings on current and upcoming Japanese dramas but is not intended to be comprehensive.
View all posts by jadefrost →
This entry was posted in Fuji TV, Spring 2018 Dramas and tagged Kioku, Matsushita Yuki, Nakai Kiichi, Yuka. Bookmark the permalink.