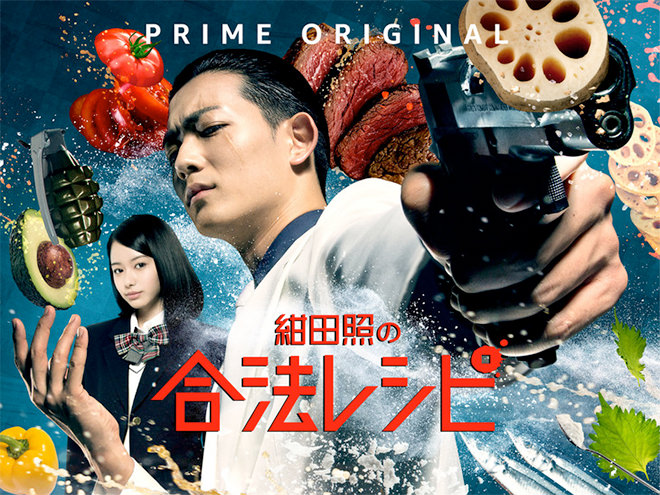 Story
Konda Teru is a third-year high school student and gang member of the Shimofuriniku-gumi. He lives with death in a world of guns, torture and fighting, but gunpowder smoke can make him think of mackerel grilled with salt. Konda attends school with classmate Haru Maki. Despite being faced with the dangers to his life and swamped by schoolwork, he takes inspiration from his day and creates exquisite food daily with wild imagination. This food gets him through difficult gang situations, at times sparks love and even saves people’s lives. One day, Shimofuriniku-gumi member Marunaga Eiji gets caught by the Momoka-gumi at the scene of a transaction which was supposed to be top secret. Back at the office, Marunaga is held accountable and given a thrashing by Rousu Musashi, the gang’s second-in-command, and others. New gang member Konda stands at attention and keeps watching Marunaga. Marunaga is about to lose the tip of his small finger to settle the matter when the office phone call rings. The call is from the Momoka-gumi who say they are coming to attack the Shimofuriniku-gumi’s office now. The Shimofuriniku-gumi stand ready for a gun battle. But the Momoka-gumi do not come even after a long wait. A lookout informs them that the Momoka-gumi disbanded and the members in the office begin to relax. However, Mino receives a phone call from the Momoka-gumi’s second-in-command Hozuki Kojiro. The swirl of angry voices, flying bullets, grenades, revolvers makes Konda think of … …

This blog contains information and musings on current and upcoming Japanese dramas but is not intended to be comprehensive.
View all posts by jadefrost →
This entry was posted in Amazon Prime, Winter 2018 Dramas and tagged Konda Teru no Gouhou Recipe. Bookmark the permalink.