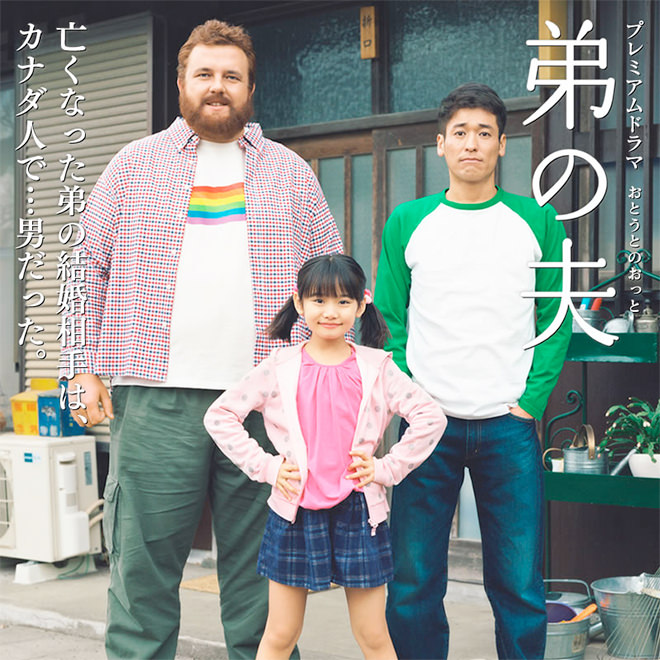 Story
A bearded foreigner visits Origuchi Yaichi who is single-handedly raising Natsuna, his daughter of elementary school age, all of a sudden. Yaichi had a younger twin brother Ryoji but Ryoji moved to Canada long ago and they virtually broke off ties. Ryoji has passed away and this man in front of Yaichi is his “husband” Mike. Mike ends up staying at Yaichi’s house for a while. But Yaichi cannot get rid of his prejudice against gays. He is not sure how to treat him and ends up getting irritated. However, Natsuna quickly warms up to Mike’s personality and as Yaichi gets to know Mike’s unconventional views on couples and family, he slowly begins to accept him. A new “wind” begins to blow in the Origuchi family which also spreads to Yaichi’s ex-wife Natsuki. But at the same time, this causes ripples among the people around them too. And Mike has a “promise” with Ryoji that he must tell Yaichi … …

Characters
Sato Ryuta as Origuchi Yaichi
A single father who is raising his daughter Natsuna on his own. He has a younger twin brother Ryoji but they have been estranged for a long time.

Nakamura Yuri as Hirata Natsuki
Origuchi Yaichi’s ex-wife. She threw herself into work after their divorce.

This blog contains information and musings on current and upcoming Japanese dramas but is not intended to be comprehensive.
View all posts by jadefrost →
This entry was posted in NHK, Winter 2018 Dramas and tagged Otouto no Otto. Bookmark the permalink.

2 Responses to Otouto no Otto