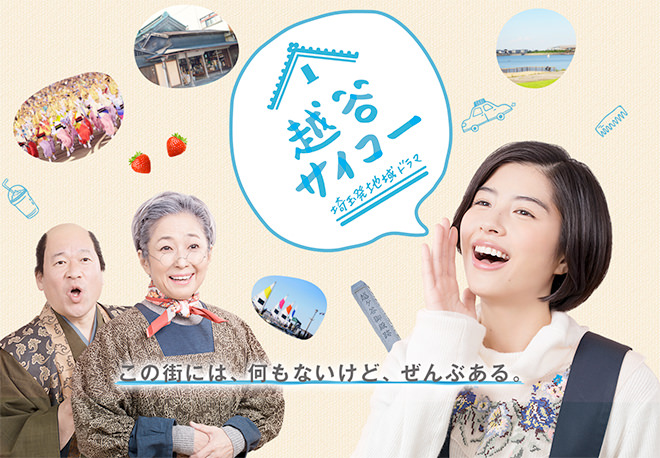 Date: From 10.00 p.m., 28 February 2018
Scriptwriter: Sakurai Tomonari
Cast: Sakuma Yui, Sato Jiro, Takeshita Keiko, Iijima Hiroki, Okuda Yohei, Konno Hiroki, Yoshizawa Hitomi, Kato Reiko
Synopsis: Rookie first-year employee Urai Kanako (Sakuma Yui) works for a company which sells houses in Koshigaya City, Saitama Prefecture. Kanako’s parents divorced when she was a child and she grew up here after her mother came back to her grandparents’ old home. However, her mother passed away eight years ago and she now lives with her grandmother Yoshie (Takeshita Keiko) who runs a sundry shop. One day, Kanako encounters the ghost of an ancestor Densuke (Sato Jiro) inside the old storehouse. Densuke was the third generation head of the Urai clan during the Edo period. He was killed for losing a precious comb which a feudal lord who had to alternate residence had placed in his care. Since then Densuke has spent the intervening 350 years searching for the comb inside the storehouse, unable to rest in peace. Wanting to leave the old house where going to toilet is also inconvenient, Kanako tries to sell it for the purpose of project to make the remaining old storehouses in Koshigaya City into cafes. And then, she gets the idea to make use of Densuke but … …
Official Website: www.nhk.or.jp/saitama/saiko

This blog contains information and musings on current and upcoming Japanese dramas but is not intended to be comprehensive.
View all posts by jadefrost →
This entry was posted in NHK, Winter 2018 Drama Specials and tagged Koshigaya Saikou. Bookmark the permalink.