Shiro to Kiiro ~ Hawaii to Watashi no Pancake Monogatari 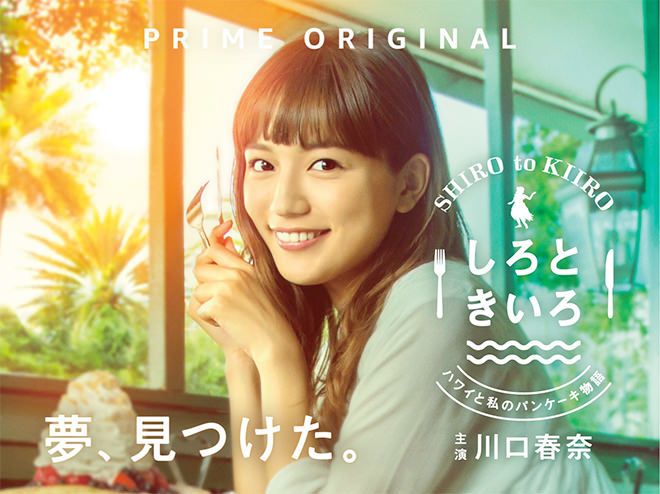 Story
In Honolulu, Hawaii in 2013, Sawano Nami oversleeps on the first day of the opening of her shop and has to run desperately to get there in time. Back in 2009, in Chigasaki, Kanagawa Prefecture, Nami’s father Kenta, her childhood friend Mitsuyama Ryosuke and others are gathered at their house talking animatedly about surfing. Nami has been planning a high school graduation trip to her dream destination, Rome, with her good friends Morino Mana and Wada Mizuho. But she feels in low spirits after the two of them broach the topic of going to Hawaii instead. Although her father runs a surf shop and her father’s friends as well as Ryosuke are always at home, she feels out of her element in the sea. Noticing her mood, Kenta makes pancakes topped with a generous amount of fresh cream in an attempt to cheer her up. He would always prepare it when he sees her looking down. In Hawaii, Nami meets Ezaki Takuma. The two of them hit it off and she even feels her heart pound. They communicate even after she returns to Japan but lose contact following the discovery of her father’s illness when she becomes a university student. Nami makes her father’s special, world’s most delicious pancakes for her father for the first time. Kenta passes away not long after eating them. Then some incident spurs Nami to travel to Hawaii to meet Takuma. When they meet again, he takes her to his favourite shop. The taste of the pancakes she eats at this place is just like her father’s pancakes. For some unknown reason, Nami is filled with the desire for many people to enjoy this “taste of bliss”. And so, she asks the couple who own the shop to let her take over the business. Although Nami knows that there will be a difficult road ahead, she has found the first dream in life which she wants to make a reality and works on fulfilling it. This is how she brings the popular pancake restaurant Eggs n’ Things to Japan, which sparks a pancake boom in the country. Despite suffering difficulties and setbacks, Nami fulfils her dream, motivated by thoughts of her father as well as the support of family and friends.

Characters
Kawaguchi Haruna as Sawano Nami
The future owner of Eggs n’ Things. She looks like the typical ordinary girl-next-door. She is a little introverted. As a child, she loved the pancakes her father made but now she tends to shy away from them because of her diet. An encounter during her Hawaii trip spurs her to set her sights on becoming the owner of Eggs n’ Things.

Yokohama Ryusei as Mitsuyama Ryosuke
Sawano Nami’s childhood friend. They have been together since kindergarten and he is like family to her. His dream is to be a professional surfer. He is popular even in school but he has always liked Nami.

Yoshikawa Ai as Morino Mana
Sawano Nami’s good friend. They have been together since high school. She is always cheerful and active, and the life of the party.

Oda Risa as Wada Mizuho
Sawano Nami’s good friend and the person whom she can speak of anything to. They have been together since elementary school. Contrary to her appearance, she is good at surfing.

Yakumaru Sho as Ezaki Takuma
A youth who lives in Hawaii. He helps Sawano Nami when she gets lost there. He may live in Hawaii but he is not the outdoors type and is not good at water sports. He is cool and intelligent and he wants to be an astronomer in the future.

Nakamura Anne as Sawano Sae
Sawano Nami’s older sister. An esthetician. Her bubbly personality is the exact opposite of Nami’s and she is a dependable person. She even gets along very well with their father’s friends.

Yoshizawa Hisashi as Takamatsu Kosuke
A young entrepreneur of the restaurant group Takamatsu. Sawano Nami meets him as a lecturer of a seminar which she visited to study to become the owner of Eggs n’ Things. He later offers Nami advice and helps her when she is in a difficult situation.

Maiko as Murase Reiko
A Japanese who works at the Eggs n’ Things in Hawaii. She is like an older sister whom Sawano Nami can turn to. She is also very well-loved by the local staff.

Tokito Saburo as Sawano Kenta
Sawano Nami’s father. He runs a surf shop. He was a well-known surfer in the past but quit following some incident. He has a cheerful, generous personality, rarely gets angry and always smiles. Many old friends and young surfers who like him come to the shop.

Zaizen Naomi as Sawano Terumi
Sawano Nami’s mother. She helps out at the surf shop. She is a sensible, energetic person. She is a dependable presence to Nami who is distant with her father. Her husband’s death gives her a huge shock and she cannot decide whether to close down the shop.

This blog contains information and musings on current and upcoming Japanese dramas but is not intended to be comprehensive.
View all posts by jadefrost →
This entry was posted in Amazon Prime, Winter 2018 Dramas and tagged Okada Yoshikazu, Shiro to Kiiro. Bookmark the permalink.