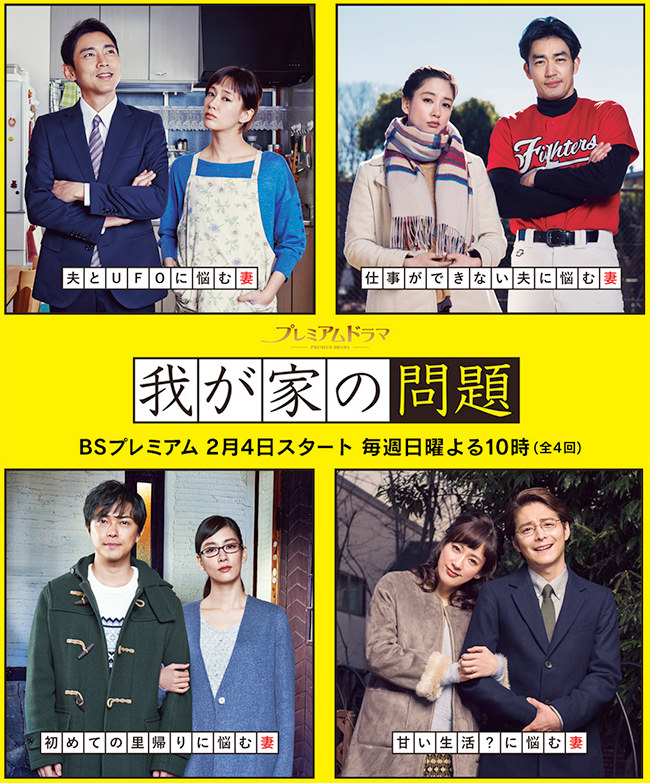 Story
An omnibus story about four young wives who worry about the surprising changes in their husbands and newly-married life.

The wife who worries about her husband and UFOs
Story: Takagi Minako (Mizukawa Asami) is a housewife who is busy raising her child. She and her husband Tatsuo (Koizumi Kotaro) were co-workers at a confectionery manufacturer and their relationship of capable senior and mediocre office lady has continued to this day. One day, Tatsuo who was promoted to a section manager sy the confectionery manufacturer last year, says he saw a UFO while on the way home from work. Minako does not believe that UFOs actually exist. But the next day, she discovers many materials related to UFOs in the drawer of Tatsuo’s table. When he gets home, she asks whether he truly saw the UFO. Tatsuo proceeds to describe the moment he saw the UFO at the waterfront park which is on the way home, and Minako is dumbfounded by his abnormal behaviour. She begins to feel a sense of crisis about their family … …
Cast: Mizukawa Asami, Koizumi Kotaro

The wife who worries about her incompetent husband
Story: Her husband Inoue Shuichi (Otani Ryohei) seems to be an “incompetent employee”. That is the thought that occurs to Megumi (Mizukawa Asami) when she hears the heckling of his colleagues at a company baseball competition which she happened to go and watch. Megumi is a housewife and five months pregnant. She thought she got married to a capable husband and had never thought that Shuichi, a salesman working for a large sports goods manufacturer, is not good at his job until now. She begins to feel anxiety … …
Cast: Mizukawa Asami, Otani Ryohei

The wife who worries about returning home for the first time
Story: Kishimoto Koichi (Katsuji Ryo) and his wife Sayo (Mizukawa Asami) and live and work in Tokyo. The two of them are from other parts of Japan. “How about we take our first long break since our marriage?” Koichi is a system engineer who works for an IT company. His family home is in Nagoya, Aichi Prefecture. Sayo is a career woman who works for the special events department of a Tokyo department store. She is half-baked in her work but is a show-off. Her family home is in Mito, Ibaraki Prefecture where they have a traditional natto shop. The couple want to go on a trip instead of returning to their hometowns but that is also impossible. The difficulty of dealing with her father-in-law who wishes to live together, hangs over Sayo. However, they resolutely go to Sayo’s family home in Mito and then continue on to Koichi’s family home in Nagoya. The two of them listen to the thoughts of their in-laws which they had not known about … …
Cast: Mizukawa Asami, Katsuji Ryo

The wife who worries about her indulgent life?
Mizukawa Asami as Tanaka Masami
Story: Tanaka Masami (Mizukawa Asami) is a newly married housewife who enthusiastically prepares home-cooked meals to please her husband Junichi (Koike Teppei ). Junichi works for an advertising firm. He always receives a message from Masami inquiring about dinner at 6pm. However, Junichi has lived alone for a long time, so he feels uncomfortable about having another person come into his life. He makes up reasons in an attempt to give it a pass and comes home increasingly late. Although Masami is envied by her good friends she actually begins to have misgivings about her husband’s attitude.
Cast: Mizukawa Asami, Koike Teppei

This blog contains information and musings on current and upcoming Japanese dramas but is not intended to be comprehensive.
View all posts by jadefrost →
This entry was posted in NHK, Winter 2018 Dramas and tagged Koizumi Kotaro, Mizukawa Asami, Wagaya no Mondai. Bookmark the permalink.