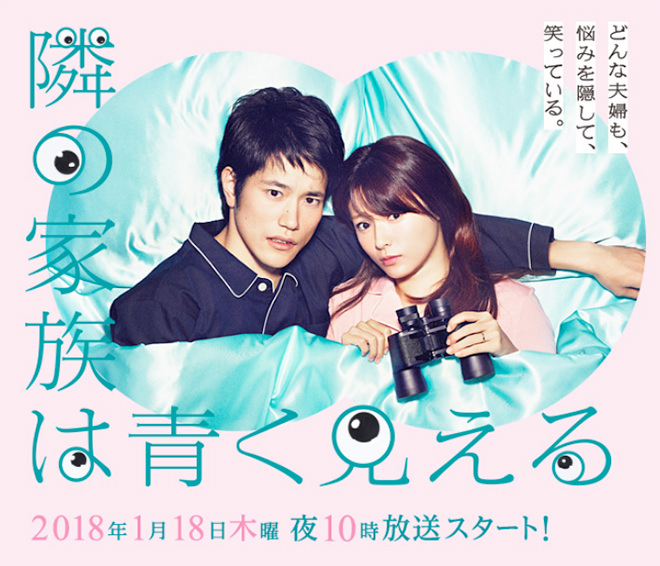 Story
Scuba diving instructor Igarashi Nana is married to Daiki who works for a mid-sized toy manufacturer. Daiki is a kind but rather undependable husband. The two of them had lived in a small apartment to save money and buy a “cooperative house”. Divorced stylist Kawamura Ryoji and nail artist Sugisaki Chihiro who are about to get married; Komiyama Shinichiro and Miyuki who have two daughters; and architect Hirose Wataru who designed this “cooperative house” live in the same residential complex. With their purchase of the house, Nana and Daiki start trying to have a baby. Daiki’s younger sister Kotone is pregnant with a child. Their mother is overjoyed and hopes Nana will be next. However, it is not easy to conceive a child. Despite becoming acutely aware of how difficult this can be, Nana wants to have a child quickly. She persuades her husband and they visit a fertility clinic. This is when they are shocked by the doctor’s words that they are infertile if she cannot conceive although she has not been using birth control for more than a year.

Characters
Fukada Kyoko as Igarashi Nana
A scuba diving instructor and a lively wife. She had enjoyed life as a couple with her husband Daiki in their small apartment while they saved money to buy a house. With their purchase of a “cooperative house”, they start trying to have the baby which Daiki’s mother hopes for. However, it is not easy to conceive a child. With babies on the way for their friends and Daiki’s young sister, they start feeling anxious … …

Matsuyama Kenichi as Igarashi Daiki
Igarashi Nana’s husband. He works for a mid-sized toy manufacturer. He is kind but rather undependable husband. He loves children and wants to have a child quickly for the sake of his mother who is eagerly waiting for a grandchild, but he is unable to bring that up to Nana. However, with their purchase of a “cooperative house”, they start trying to have a baby. It is not easy to conceive a child and husband and wife begin to try various means.

Hirayama Hiroyuki as Kawamura Ryoji
A divorced stylist who is a little frivolous but capable in his work. He is engaged to Sugisaki Chihiro and they have bought a “cooperative house” as a residence for just the two of them. He has been busy preparing for the wedding ceremony. One day, he receives a phone call from his ex-wife’s family.

Takahashi Maryjun as Sugisaki Chihiro
A nail artist who has never been interested in having children. She is engaged to Kawamura Ryoji and they have pledged not to have children. As their wedding ceremony approaches, she is busy chooses dresses and preparing for the big day.

Kitamura Takumi as Aoki Saku
A young bartender who is dating Hirose Wataru. One day, he suddenly moves in with Wataru and they begin living together.

Mashima Hidekazu as Hirose Wataru
A top architect who designed the “cooperative house” and also bought a house designed to his preference. He hides the fact that he is gay. One day, Aoki Saku whom he is dating suddenly moves into his house. Wanting to hide their relationship, he lies to the other residents that Saku is his nephew.

Matobu Sei as Komiyama Miyuki
A housewife who pretends to have a happy family such as posting photos of her meals every day. She had lived in company housing for many years but bought her dream home. She was really happy but right before they moved house, her husband Shinichiro suddenly quit his company. She hides the fact that he is unemployed from the people around them and continues to act like they are the perfect family.

Nomaguchi Toru as Komiyama Shinichiro
Komiyama Miyuki’s husband. A salaryman who worked for a trading company. They bought their dream house but right before they moved, he ended up resigning from his company because he was tired of the frequent postings away from home and business trips. He is told by his wife to act like he has not quit as she wants to hide his unemployment from the people around them.

Takahata Atsuko as Igarashi Satoko
Igarashi Daiki’s mother. She runs a yakitori shop with her husband Kensaku. She hopes her son Daiki and his wife Nana will have a child.

This blog contains information and musings on current and upcoming Japanese dramas but is not intended to be comprehensive.
View all posts by jadefrost →
This entry was posted in Fuji TV, Winter 2018 Dramas and tagged Fukada Kyoko, Matsuyama Kenichi, Tonari no Kazoku wa Aoku Mieru. Bookmark the permalink.