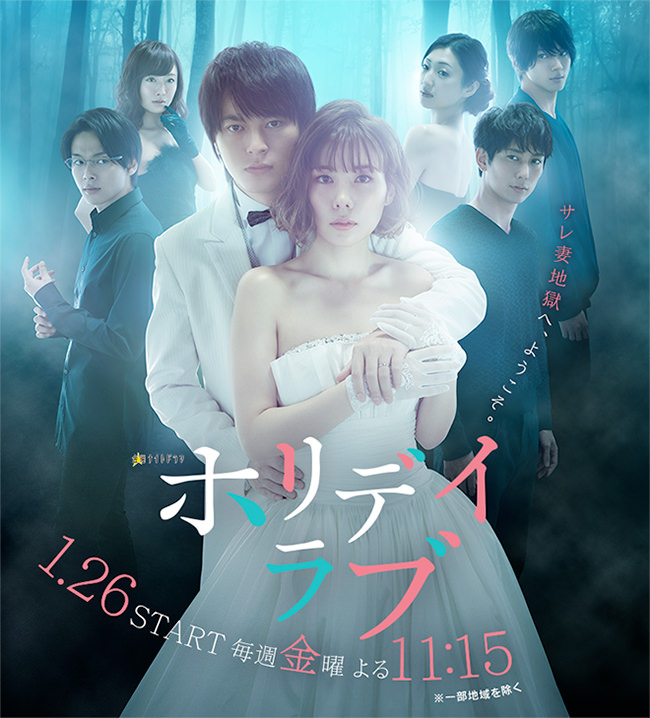 Story
Takamori Azu operates a nail salon at home. She has built a happy family where she is supported by her dear husband Junpei and their daughter Nanaka. At this point, Junpei who works for a large construction company, is unexpectedly posted to the countryside. The only time they can spend as a family is only when he comes back on weekends. However, their relationship remains the same as before. Azu never imagined that the day would come when this very picture of happiness is shattered. One day, a new customer Sakaguchi Reika comes to her nail salon. She casually asks if Azu worries about her relationship with her husband. Azu is just a wee bit unhappy. She feels that Junpei has not been looking at her as a woman lately but she cannot put a finger on it. Reika tells her that from the perspective of men other than her husband, she is a perfectly lovely woman, and Azu feels her heart stir. Meanwhile, a new part-time office clerk Izutsu Rina joins the place where Junpei has been posted to. The male employees are delighted to have someone feminine and cute like Rina whom they have never had before. The workplace gets lively all of a sudden but something happens … … Azu discovers that Junpei whom she trusts more than anyone else, is having an affair. Her peaceful everyday life suddenly transforms into days of endless worry. After an internal struggle, she decides to trust in him again. Junpei also rediscovers his love for her and the two of them are about to get back together again. However, each time they try to do that, they would be faced with all sorts of difficulties caused by Rina.

Characters
Naka Riisa as Takamori Azu
An ordinary housewife who lives happily with her husband Junpei and their daughter. She has a straightforward, cheerful personality. After childbirth, she studied nail art and opened her own nail salon at home to help out with the loan for the house they built which was a bit of a stretch, and household expenses to get back on track. A tough woman of vitality. She thinks that she and Junpei are the only husband and wife who are furthest from infidelity and divorce. However, after he crosses the line, life as a couple becomes agonising.

Tsukamoto Takashi as Takamori Junpei
Takamori Azu’s husband. He works for a large construction company. He has left his wife and child in Tokyo for a posting at a construction company in the countryside. A sporty, passionate guy, he is cheerful and somewhat simple but he has the sincerity and enthusiasm to galvanise the roughnecks there. He is trusted by everyone and also liked by guys. He is actually the sensible type, but ends up succumbing to the temptation of Izutsu Rina who cleverly worms her way into his heart.

Nakamura Tomoya Izutsu Wataru
Izutsu Rina’s husband. He is not only chauvinistic but also very possessive and regards his wife as his possession. He is a callous man who criticises the unfaithful Rina at every turn. His family home is in a prime location in Tokyo’s Minato ward. After studying in top junior high and high schools, he attended a top university and is now a consultant at a foreign accounting firm. He has a controlling personality and hates useless, irrational things. He constrains Rina too.

Matsumoto Marika as Izutsu Rina
A clerk who works with Takamori Junpei at the place where he was posted to. She is the type whom men will not leave alone. She is smart but is a high school graduate as a result of financial problems. She feels inferior to her husband Izutsu Wataru, who graduated from a top university, as well as to his wealthy family. Everything is controlled by Wataru and she feels small. However, she is no ability to live alone and because of that, she has to swallow her unhappiness with him. She firmly believes Junpei is the man of her destiny and begins to get close to him by every possible means to make him hers.

Yamada Yuki as Kuroi Yoshinobu
He meets Takamori Azu, who is weighed down by her husband’s affair, as a fellow businessman through a spiritual app. He is a good listener and also charming man. He runs a total of eight nail and beauty salons.

Hiraoka Yuta as Haruta Ryoma
Takamori Azu’s old friend and confidant. He works in a beauty-related job too and is the type whom females consider safe. Even Azu can open up and talk to him about anything like she would to a female friend and they have established a relationship of mutual trust. Because he likes children, he takes good care of Azu’s daughter Nanaka.