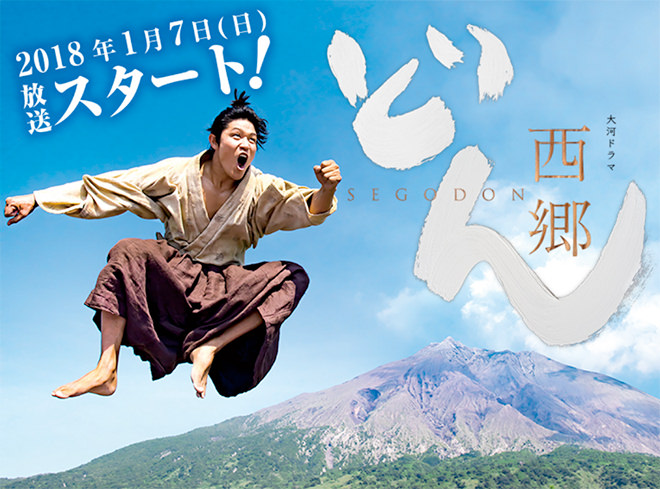 Story
Saigo Takamori (Kichinosuke), the hero of the Meiji Restoration, was born to a poor, low-ranking samurai family in the Satsuma domain (present day Kagoshima Prefecture). His parents died early and he worked as an aide to government officials in order to supplement the household income. However, when he saw people in trouble, he could leave them alone and would end up giving away his own pay as well as packed meal. The Saigos became poorer and poorer. To the family’s astonishment, Saigo laughed off their hunger. His simple honesty caught the attention of the charismatic feudal lord of Satsuma, Shimazu Nariakira. Nariakira’s assertion that the love of people is what will enrich and strengthen the nation fascinated Saigo too. He took on Nariakira’s secret mission, crisscrossed Edo and Kyoto and eventually became a key person for Satsuma. His exile in Amami Oshima roused love. He met Katsu Kaishu, Sakamoto Ryoma and other allies which woke the revolutionary in him and he soon followed through with the Meiji Restoration. Not a portrait of Saigo survives today and much of his life is a mystery. He met and parted with his life’s teacher Nariakira, had a fleeting love with Atsuhime and friendship as well as enmity with his friends. He was twice exiled and thrice married. He overthrew the Tokugawa Shogunate with exceptional bravery and action. Although he accomplished the restoration, he lost his life in a fight with the new Meiji government. The true Saigo was careless and honest to a fault. Everyone who met him, came to like him. There was always laughter, love as well as ups and downs around this charming man. He believed that if every subject lived happily, Japan would be a stronger country. He gave love without demanding any in return.

Characters
Suzuki Ryohei as Saigo Kichinosuke (Takamori)
The eldest son of a poor, low-ranking samurai family in the Satsuma domain. He was popular with both males and females because he was full of charm. A man who was little thoughtless but kind and hot-blooded, he could never ignore anyone who was in trouble. He was discovered by the charismatic feudal lord of Satsuma, Shimazu Nariakira, and given a secret mission. However, he was pursued by the Tokugawa Shogunate and was exiled to Amami Oshima. But an encounter which can only be described as destiny awaited him there.

Eita as Okubo Shosuke (Toshimichi)
Saigo Takamori’s childhood friend in the neighbourhood. He was said to be the smartest in their hometown. But his father got embroiled in a political feud and he had a troubled youth. After that, he got close to Shimazu Nariakira’s younger brother Shimazu Hisamitsu and began to make his mark. The Meiji Revolution would not have begun had Saigo and Okubo not met. He was Saigo’s ally and rival in his lifetime.

Kuroki Haru as Iwayama Ito
The daughter of a samurai family who lived in the same castle town as Saigo Takamori. A tomboy who was curious about everything, she occasionally displayed incomparable energy and fortitude. She had secretly liked Saigo since childhood. At one time, she was married to another family against her will but after many twists and turns she became Saigo’s third wife.

Sakuraba Nanami as Saigo Koto
The eldest daughter of the Saigo family. Saigo Takamori’s younger sister. She was a hardworking person who took care of their younger siblings and scrambled to make ends meet even though she was amazed by her older brother who caused trouble one way or another. Despite her marriage, she worried about the family. She continued to admire and support Saigo.

Watabe Gota as Saigo Kichijiro
The second son of the Saigo family. Saigo Takamori’s kind, honest and sincere younger brother. He became the big brother to the family which was pushed into poverty, and supported them as the main breadwinner, in place of Saigo who had a turbulent life. Although he scraped along by working hard in the fields and side jobs, he understood Saigo’s feelings and protected the family.

Nishikido Ryo as Saigo Judo
The third son of the Saigo family. Full of youthful vigour, he hid out with Arima Shinshichi and other radical samurai of the domain in Teradaya in Fushimi, and plotted the assassination of the Kyoto Shoshidai. He later followed his older brother Saigo Takamori who was called back from a second exile to an island, and served in the Boshin War. When the new Meiji government was formed, Saigo parted ways with Okubo Toshimichi and the others but he remained in the Meiji government and stood on the side which cornered his brother in the Seinan War.

Kazama Morio as Saigo Kichibe
Saigo Takamori’s father who was a rather useless man. He did detailed accounting work with the abacus in one hand. But in fact, it seemed that he had great skill with the sword when he was young. Saigo inherited his kindness and compassion from his father.

Matsuzaka Keiko as Saigo Masa
Saigo Takamori’s mother. A gutsy woman who was described as a potential chief retainer had she been a man. She was cheerful despite the family’s poverty and showed her children with love. She believed that children were charges of the domain. She brought Saigo up to be a principled, loving man. Saigo inherited his deep love and courage from his mother.

Kitagawa Keiko as Oichi (Atsuhime)
A princess who was born into a branch family of Shimazu family of Satsuma. She had been living a carefree life in Satsuma but caught the eye of Shimazu Nariakira and became a candidate for the official wife of the 13th shogun, Tokugawa Iesada. She was adopted by Nariakira and prepared herself for marriage staked on the fate of the country. But a budding love grew between her and Saigo Takamori who was busy settling the wedding ceremony and she was greatly shaken. She would develop a connection with Saigo with the bloodless surrender of Edo.

Kitamura Yukiya as Oyama Kakunosuke (Tsunayoshi)
A comrade who fought and studied together since childhood. He was like a lively parent to Saigo Takamori and the rest because he was older. He joined the Seichu-gumi which brought together Saigo, Okubo Toshimichi and other youth in the castle town, and staked their youth on the revolution. After the Meiji Restoration, he became the governor of Kagoshima Prefecture but his extremism such as not paying taxes to the new government, infuriated Okubo.

Watanabe Ken as Shimazu Nariakira
The 28th head of the Shimazu family. A charismatic man who was wise and possessed outstanding knowledge, he was a leading force of the period through grand political philosophy. He discovered the courage and exceptional talent of the poor, low-ranking samurai Saigo Takamori, and promoted his selection. He was Saigo’s teacher for life and a “great father”.

Toda Naho as Kiku
She had many children as Shimazu Nariakira’s concubine but they died young. Rumours circulated that Shimazu Narioki’s concubine Yura who was against Nariakira, was behind this tragedy and a family feud broke out. Then Nariakira fell ill with a mysterious sickness. But in the course of her interactions with Atsuhime and Saigo Takamori, she continued to devotedly support her husband.

Kaga Takeshi as Shimazu Narioki
The 27th head of the Shimazu family and the lord of the Satsuma domain. He shunned his eldest son Nariakira. Refusing to cede the position of lord of the domain, he suppressed Nariakira’s supporters and promoted Shimazu Hisamitsu, his son with his concubine Yura no Ko with the plan to continue his long reign. And finally, the moment came for a direct confrontation with Nariakira.

Aoki Munetaka as Shimazu Hisamitsu
The son of Shimazu Narioki and his concubine Yura no Ko. He adored his step brother Nariakira who was a man of exceptional ability, and followed after him. He became the most powerful man in the Satsuma domain upon his brother’s death. But he distanced himself from Saigo Takamori and was his “lifetime enemy”. As their conflict deepened, he sent him to exile on remote islands.

Sawamura Ikki as Akayama Yukie
He came from a distinguished family and strove to make Shimazu Nariakira the next lord of the domain. His exchanges with the Saigo family went back a long time ago because Saigo Kichibe had served as the steward of the Akayama family. He was like a teacher to Saigo Takamori and the others, and a good confidant. He was also the person who connected Saigo with Nariakira. However, he got involved in the conspiracy of Shimazu Narioki and his concubine Yura.