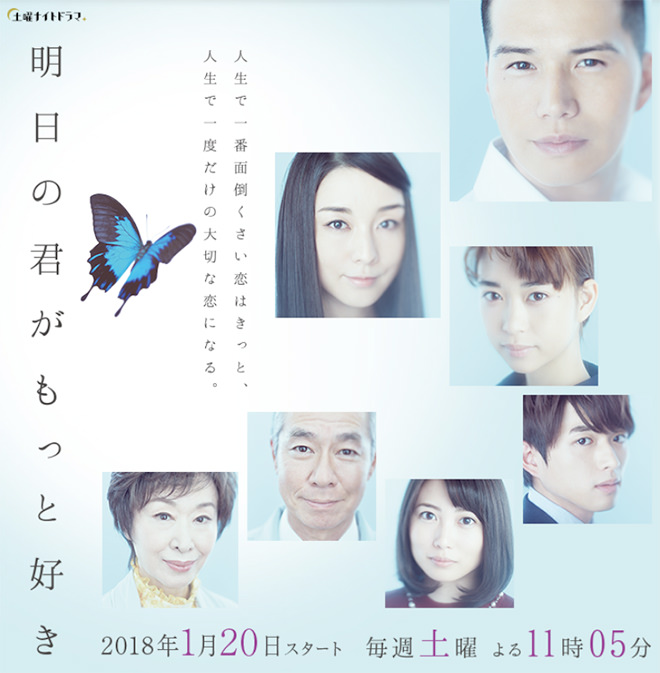 Story
Matsuo Ryo is a landscape garden designer who quite openly says that females are trouble and is cool to romance. Satokawa Akane is a company president’s secretary who keeps having relationships with useless men and is at the point of giving up on love. Shirosaki Haruhi is a new employee at Akane’s company who has another side in complete contrast to his friendly character. Tanno Kaoru works at a factory in the day and a girls bar at night while troubled by her sexual identity. These four do not have it easy in love. Furthermore, Akane’s younger sister Kuroda Azusa who stole her boyfriend Kuroda Tomohiro and went on to marry him, gets involved in their romances. One day, Ryo goes to a client’s office building to deliver a rental tree. While carrying in the tree, he inadvertently sees Akane’s skirt lifted up by a sudden gust of wind. But his conditioned response is indifference to women even if the beautiful and intelligent Akane is regarded as a “lofty dream” by male colleagues. A new employee Shirosaki Haruhi suddenly calls out to her in a friendly voice to go for tea together. Akane is momentarily taken aback by Haruhi who is more than 10 years her junior. She does not respond but a smile escapes at his carefree manner. However, the moment Akane turns her back and walks out, the look of innocence in Haruhi’s eyes vanishes. One night, Ryo’s company president Tanno Fumihiko broaches the topic of him getting married to his daughter Kaoru and taking over the family business. Tanno is like a father to Ryo who has been a live-in employee ever since he left home and came to Tokyo after graduating from junior high school. And Kaoru is like a younger sister whom he grew up with. This sudden conversation makes Ryo uncomfortable. At this moment, Kaoru is dressed beautifully in feminine clothing at the girls bar where she works. A new customer Azusa comes to the bar. It is rare to have female customers and Azusa is initially nervous. But as Kaoru listens to her complain about her husband, she begins to open her heart to her.

Characters
Ichihara Hayato as Matsuo Ryo
Tannoen’s live-in landscape garden designer. He is the second son of a distinguished troupe of a popular theatre based in Hakata, Kyushu. But he did not want to become a performer because he is not good with words and ran away at the same time that he graduated from junior high school. He did not have a place to go in Tokyo and was found by Tanno Fumihiko, the company president of Tannoen. His hobby is to photograph insects and flowering plants. He dates women who approach him but has no interest in romance and love. On his days off, he would go out on his motorbike with a camera in one hand and spend his free time alone.

Ito Ayumi as Satokawa Akane
The secretary of a leading company’s CEO. She is highly educated and beautiful but has awfully bad luck with men. Her ex-boyfriend Kuroda Tomohiro was stolen by her younger sister Azusa. After that, she kept getting involved with married men. Her parents died in an accident when she was a child. After that, she lived with her grandparents in a house in Tokyo’s working class neighbourhood but she finally begins to think of giving up marriage and buying an apartment. Her policy is not to sell herself.

Shirasu Jin as Shirosaki Haruhi
A young male employee at the company where Satokawa Akane works. He fearlessly approaches Akane who is shunned as a lofty dream. He appears to be cheerful and and carefree, but he actually is traumatised by his mother’s physical abuse as a child. He cannot control his despair with older women.

Morikawa Aoi as Tanno Kaoru
The only daughter of Tanno Fumihiko, the company president of Tannoen. She grew up like a sibling under the same roof as Matsuo Ryo but has left the family home and lives alone now. She is troubled about her own sexual identity. In the day, she is boyish at a factory, and at night she completely changes. She dresses in feminine clothing at a girls bar where she works as she searches for her sexual identity. She likes Ryo but she does not know if those are romantic feelings as a female. She refers to herself as “boku”.

Shida Mirai as Kuroda Azusa
Satokawa Akane’s sister who is 10 years her junior. Three years ago, she stole her sister’s boyfriend and left home for a “marriage by abduction”. However, married life has already chilled. She meets Tanno Kaoru at a girls bar which she burst into to get her complaints heard and they grow friendly.

Yanagiba Toshiro as Tanno Fumihiko
Tanno Kaoru’s father. The company president of Tannoen where Matsuo Ryo works. He was mischievous in his younger days but took over Tannoen which had been a small gardening shop from his parents and grew it to the company it is today. His wife died of illness when Kaoru was 3 years old. He has a long-time girlfriend but he has refrained from remarrying out of consideration for his daughter’s feelings. He took in Matsuo Ryo from the age of 15, threw him into work and taught him values. He hopes that Kaoru and Ryo will get married and follow in his footsteps.

Watanabe Dai as Kuroda Tomohiro
Kuroda Azusa’s husband. Satokawa Akane’s ex-boyfriend. A salaryman who works for a large company. He was engaged to Akane but was swayed by the younger Azusa who approached him and they got married after causing a big uproar. His relationship with Azusa has chilled and he regrets his past choices.

This blog contains information and musings on current and upcoming Japanese dramas but is not intended to be comprehensive.
View all posts by jadefrost →
This entry was posted in TV Asahi, Winter 2018 Dramas and tagged Asu no Kimi ga Motto Suki, Ito Ayumi, Shida Mirai. Bookmark the permalink.