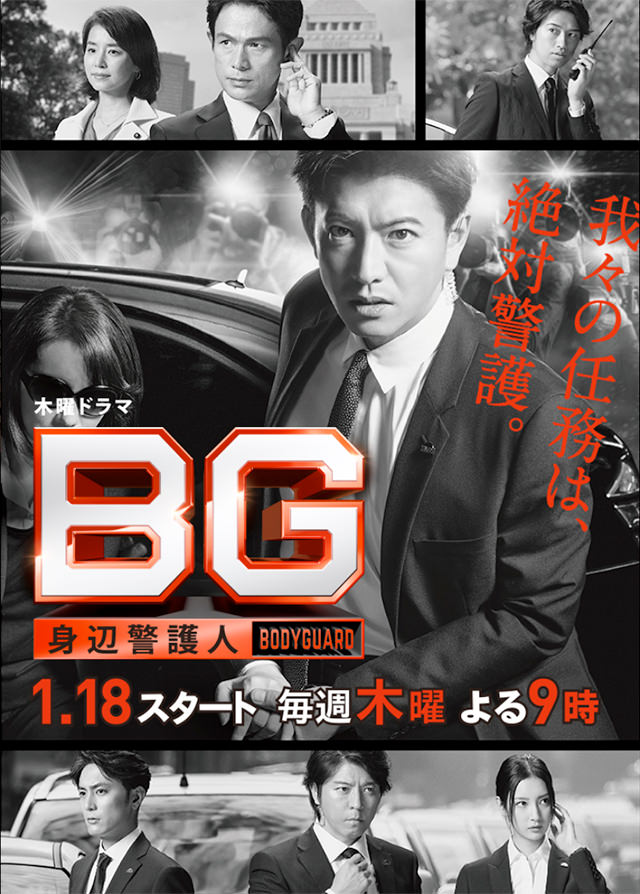 Story
A black car passes by a road maintenance works site where Shimazaki is working on a frigid winter’s day. In the passenger’s seat is a man in a black suit, Ochiai Yoshiaki, and in the back seat is the Minister of Health, Labour and Welfare, Tachihara Aiko, whose face is hidden by sunglasses. They are being pursued by journalists. Picking up on the urgency of the situation, he indicates an alternative route. The car suddenly accelerates, knocking aside cones on the road as it speeds off. Shimazaki merely watches. Among the journalists who were left behind is Inukai Satoru who works for a weekly magazine Shukan Jiro. The next day, Shimazaki is summoned by Imazeki Shigenobu, the CEO of private security firm Hinode Security, and heads to the head office. He is offered a position in the newly established Personal Protection Division. Several years ago, Shimazaki quit being a bodyguard in the wake of some incident and became a security officer. He firmly refuses the offer, but eventually accepts it at Imazeki’s urging. Even when he makes the decision to return to being a bodyguard, he hides his past and arrives as a new bodyguard just like the other members of this division, Takanashi Masaya, Suganuma Mayu, Sawaguchi Seitaro and Murata Goro, who were gathered from various units. After gruelling training, Shimazaki is assigned his first duty, which is to protect Okubo Sasuke, the chairman of Sasuke Foods which is the sponsor of a marathon held at Sumida River, when he attends the event. At that moment, Aiko receives a threat from someone. The contents of the letter says, “If you don’t withdraw, the gun of death will go off.” Ochiai who is from the Tokyo Metropolitan Police Department’s Security Police, advises her to cancel her scheduled appearance as a starter in the marathon. However, she will not give in to the threat which has strengthened her resolve to attend the event. Okubo pushes for tighter security to prevent any incident. However, differences in attitudes towards security arise between Shimazaki and Takanashi. Then the day of the marathon finally arrives … …

Characters
Kimura Takuya as Shimazaki Akira
A member of the Personal Protection Division. He was a competent bodyguard but became the security officer of a construction site as a result of some incident. However, he decides to return to being a bodyguard after the Personal Protection Division is set up. He hides his past and assumes his duties as a “new bodyguard” just like the other members. He is considered unreliable by his team maters but his skills as a bodyguard are outstanding and this gradually becomes evident … … He and his wife Hitomi divorced six years ago. He now lives with his son Shun who is a junior high school student but has difficulty communicating, possibly because Shun has hit puberty.

Eguchi Yosuke as Ochiai Yoshiaki
A member of the Tokyo Metropolitan Police Department’s Security Police. After he joined the police, he worked at a police precinct before he was assigned to the Security Division. He was quickly appointed a security police because of his excellent ability, extensive knowledge and sound judgment. Guns are his special skill. He is not attached to a specific person but urgent and important subjects. He thinks poorly of the protection provided by private security firms which do not have weapons, and completely ignores them even if they are in the same venue.

Ishida Yuriko as Tachihara Aiko
The Minister of Health, Labour and Welfare. Intelligent and beautiful, she was a popular newscaster until she ran for a seat in the House of Representatives eight years ago. She enjoyed overwhelming support from voters, especially male voters, and spectacularly topped the election. She was selected to be the Minister of Health, Labour and Welfare because she capitalised on her gender. She is very ambitious and will do everything she can to achieve her goals.

Kamikawa Takaya as Murata Goro
The head of the newly established Personal Protection Division who assembled the members of the team. He has a gentle manner and is always composed. He watches out for each of the members as the division chief.

Saito Takumi as Takanashi Masaya
A member of the Personal Protection Division. He is also a former member of the Self-Defence Forces and is the most outstanding among the new bodyguards. He looks down on the rest of the members because of that. To put it positively, he is straightforward and passionate. To put it negatively, he is biased and unaccommodating.

Nagashima Toshiyuki as Imazeki Shigenobu
The CEO of private security firm Hinode Security. He overrides the objections of Shimazaki Akira who quit being a bodyguard six years ago, and employs him. He personally used to be in the job of personal protection as well but … …

This blog contains information and musings on current and upcoming Japanese dramas but is not intended to be comprehensive.
View all posts by jadefrost →
This entry was posted in TV Asahi, Winter 2018 Dramas and tagged BG Series, Eguchi Yosuke, Ishida Yuriko, Kamikawa Takaya, Kimura Takuya, Mitsushima Shinnosuke. Bookmark the permalink.