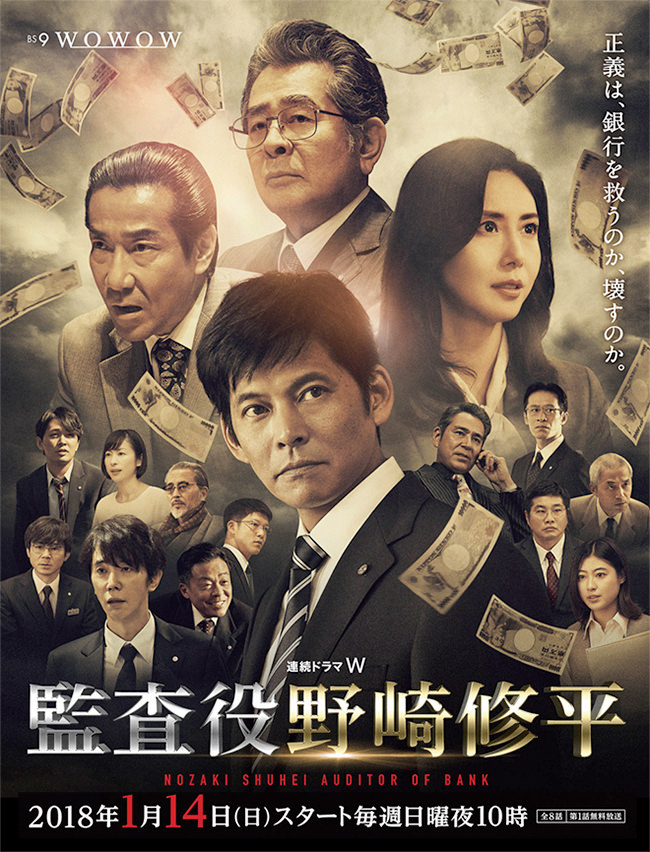 Story
It is the late 1990s where the banking industry faces the collapse of the bubble economy and a “financial big bang” which would make the financial regulator dramatically shift its existing policies. Nozaki Shuhei is the manager of Ozora Bank’s Jizodori branch and has endeared himself to employees and the townspeople due to his righteousness and empathy. But he is a long way from an employee leading life in the fast track. One day, Nozaki is notified about the closure of the bank’s branch. Prepared for a secondment, he hardly expects to be promoted to a board member with his new position as an auditor when the personnel transfer is handed down. After assuming the role, he is notified by a memo to investigate a company called Tanida Agency. Nozaki begins to probe but is instructed by his former subordinate Abe Ryuhei to stop. Witnessing wrongdoings in Ozora Bank firsthand, Nozaki makes up his mind to change it. However, he soon comes up against the “ultimate darkness” faced by the bank. And the shadow of current bank president Kyogoku Masahiko. The people against Nozaki are hotshot banker Takeda Shingo whom Kyogoku recalled from secondment, and the ambitious Tachikawa Shoko who aims to be Ozora Bank’s first female board director. A fiery battle is waged within the bank.

Characters
Oda Yuji as Nozaki Shuhei
A level-headed man with a sense of justice and empathy. He was regarded as the best among his cohor when he first joined the bank. However, he was demoted to an affiliate company for covering up wrongdoing in some incident. After that, he returned to the bank and worked as the manager of its Jizodori branch but is selected to be an auditor all of a sudden. He decides to fight against fraud and clamours for reforms.

Matsushina Nanako as Tachikawa Shoko
The manager of Ozora Bank’s Higashi Ginza branch. She is the bank’s first female branch manager. An ambitious woman who aims to be the first female board member, she initiates contact with Nozaki Shuhei and makes use of him for career advancement.

Kishitani Goro as Takeda Shingo
The sharp and capable CEO of Oozora Industries, he is summoned back to the bank as an executive director by the bank’s president Kyogoku Masahiko. He presses forward with the banks reforms as he aims for the position of bank president and searches for Kyogoku’s weakness.

Furuya Ikkou as Kyogoku Masahiko
The president of Oozora Bank who wields overwhelming power. Contrary to his genial appearance, he is a hardheaded strategist. He is also close to politicians and manipulates them at will. He selects Nozaki Shuhei to be an auditor and summons Takeda Shingo back to Oozora Bank with the intention of making the bank greater.

Santamaria Yusuke as Abe Ryuhei
A board member who used to be Nozaki Shuhei’s subordinate and performed duties together. But Nozaki was transferred because of something he did. After that, he steadily progressed in his career and became the youngest board member

Mitsuishi Ken as Yanagisawa Akiho
The vice-president of Oozora Bank. Kyogoku Masahiko’s right-hand man whose nickname is Razor. He was once used and discarded by Kyogoku who transferred him to a related business department. But he is summoned back as the vice-president to counter Nozaki Shuhei who is pursuing wrongdoings at the bank. He is a shrewd strategist.