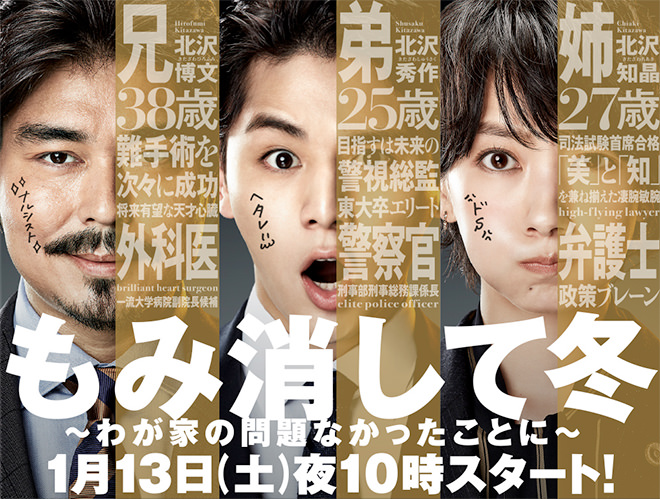 Story
The Kitazawa siblings are elites. 25-year-old Shusaku, the youngest, became a police officer with the Tokyo Metropolitan Police Department after graduating from Tokyo University. His older sister Chiaki is a competent lawyer and his older brother Hirofumi is a talented heart surgeon. Together, they solve problems, holding strategy meetings at secret family meetings. But it is only cases which threaten family peace that they do all they can to solve. As members of a well-known family, they continue to be under all sorts of pressure by their father Taizo, who is the headmaster of a private junior high school which is difficult to get into, and lead rather tough lives. One day, the first crisis since the death of their mother descends on the Kitazawas. Their father was photographed in the nude and asked for money by a woman whom he had come to like. Shusaku is shocked by this unexpected confession from his strict father. If this gets out, it will be the end of the family. Hirofumi and Chiaki try to do something even though this is against the code of professional ethics of a doctor or lawyer. Even Shusaku is encouraged to help. Sunoki Matsuya, who has just begun an apprenticing as a butler in the household, is warned by veteran butler Koiwai Rinji that he will be sacked if he divulges the family’s important matters. Meanwhile, Shusaku is feeling conflicted and beleaguered. He wants to protect his family but cannot break the law. He intends to persuade the woman and consults Ozeki Koki who is a specialist negotiator among the police officers, but … …

Characters
Yamada Ryosuke as Kitazawa Shusaku
The second son of the Kitazawa family. An elite police officer who works for the Tokyo Metropolitan Police Department and graduated from Tokyo University. He belongs to the Criminal Investigations Department’s Criminal Investigations General Affairs Division where candidates for leadership positions have been brought together. He has an excessively strong sense of justice but has been devoting himself to studying for the promotional exams and aspires to be the police commissioner some day. He is the type who keeps his feelings inside, which is why he gets pushed around by his siblings’ assertions at the family meetings.

Haru as Kitazawa Chiaki
The only daughter of the Kitazawa family. A competent lawyer who is beautiful and intelligent. She is the smartest and most eloquent among the siblings. She has a very strong sense of justice. She does not say wrong things, but her senses are a little out of sync with the people around her and she often behaves in ways that give people a great surprise.

Ozawa Yukiyoshi as Kitazawa Hirofumi
The eldest son of the Kitazawa family. A young, gifted heart surgeon who has made a name for himself from performing many successful surgeries for well-known people. His subordinates have strong faith in him and it is rumoured that he is a prospective candidate to be the hospital director in the future. He loves his family but he also loves himself. He engages in verbal battles with his sister Chiaki at family meetings and leads Shusaku around by the nose.

Nakamura Baijaku as Kitazawa Taizo
The father of the three siblings and head of the Kitazawa family. He is the headmaster of the private junior high school Kitazawa Gakuen. He wrote a bestseller about his secrets to sending his three children to Tokyo University which resulted in a spike in applicants. He has made a name for himself as the operator of a school that is difficult to get into.

Asano Kazuyuki as Koiwai Rinji
The butler of the Kitazawa family. He has been supporting the family from behind the scenes since their mother passed away 20 years ago and has earned their trust.

Chiba Yudai as Sunoki Matsuya
An apprentice butler who graduated from a British training school. This time, he serves the Kitazawa family and is stunned to learn their secrets.

This blog contains information and musings on current and upcoming Japanese dramas but is not intended to be comprehensive.
View all posts by jadefrost →
This entry was posted in NTV, Winter 2018 Dramas and tagged Haru, Momikeshite Fuyu, Nakamura Baijaku, Ozawa Yukiyoshi. Bookmark the permalink.