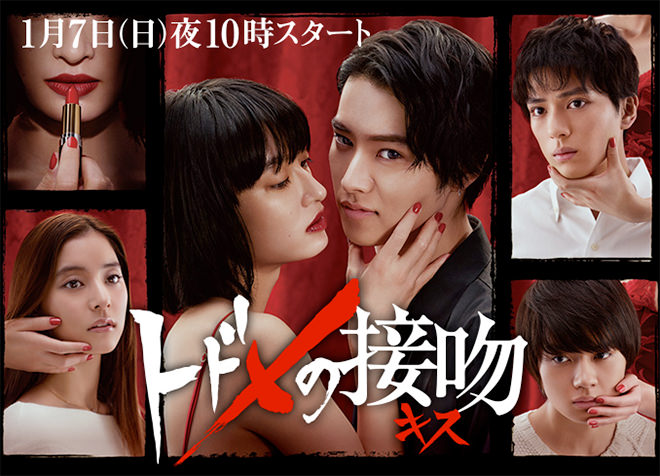 Story
Handsome Dojima Outaro, who goes by the professional name Eito, is the no. 1 host of the host club Narcissus in Kabukicho. He makes females swoon with false love. But once they run out of money, he carelessly tosses them away. He is a scumbag with a distorted perspective on love even though he looks like a kind gentleman. Outaro appears to lead a lavish life. However, he pinches pennies and lives simply because he needs a lot of money for some reason. On Christmas Eve, Outaro hears from a fellow host Osanai Kazuma that Namiki Mikoto, the daughter of a hotelier whose assets are said to be worth 10 billion yen, has come to Narcissus. He sets his sights on Mikoto who will be a suitable source of money. However, when he goes to the gents, a scary woman with red rouge shows up. She steals a kiss all of a sudden. He is immediately stricken with breathing difficulties, full-body seizures, and heart palpitations until finally, he dies. When Outaro regains consciousness, a familiar scene from a week ago is right in front of him. The recurring feeling of deja vu from situations he has already experienced confuses him. He tries to take a different approach with Mikoto this time. But he once again dies from this unpredictable, elusive woman’s kiss. Each time this happens, time loops back. On the third Christmas Eve, Outaro flees from her surprise attack. In the morning, Nezu Koichi from a detective agency appears at Outaro’s apartment and he is informed that his mother had asked Nezu to search for his younger brother Kota. In fact, Outaro had a traumatising accident in the past. 12 years ago, he took Kota and snuck onto a Christmas cruise on the cruise ship Prometheus which his father captained. Unfortunately the ship capsized and the boys were caught up in the accident. He does not love anyone as a result of this incident, and is an aloof person who only cares about social climbing … … On New Year’s Eve, Outaro and Kazuma succeed in attending the Namiki family’s horse riding club party. Outaro learns that Mikoto is being forced into an arranged introduction for a strategic marriage. In the midst of this, Mikoto’s older brother Takauji saves Outaro from an attack by a rampaging horse at a stall in the stable. Outaro steps into the social circle gathered around the Namiki family. As a host, he is despised by the high society people including Mikoto’s childhood friend Hasebe Hiroyuki, the son of a distinguished family, and Hotei Michinari, a member of the horse riding club. But this is his chance to get close to Mikoto to attain wealth and power. However, the woman who kills with a kiss appears as if to hinder him. As time loops back again, Outaro confides his experiences to a street musician Harumi Ittoku who helped him run away from her. Harumi says Outaro’s experiences are time travel. Who is this mysterious woman and what is her objective for relentlessly hindering him?

Characters
Yamazaki Kento as Dojima Outaro
The no. 1 host of the host club Narcissus. He looks like an attentive, kind gentleman but is a scumbag with who only thinks of gaining wealth and power. He likes to say, “Stupid women jump all over the ‘fake’ love I offer, and in exchange I get their ‘real’ money. 12 years ago, his family fell apart and everyone went their own separate ways. He was forced to drop out of high school, leave home and support himself by working at a host club.

Kadowaki Mugi as Kissing Woman
A mysterious, unknown woman who appears before Dojima Outaro in a Santa Claus outfit on the night of Christmas Eve. She kills him with her kiss which sends him back seven days in time. She keeps pursuing him and he gets stuck in a “death loop” where he has to experience this death and time travel over and over again because of her.

Arata Mackenyu as Namiki Takauji
The son of the hotelier who owns Namiki Group. He is good looking and also good natured. He is a perfect gentleman and runs the group’s horse riding club. He ends up confronting Dojima Outaro who has made his beloved younger sister Mikoto his target. In fact, he has a secret regarding the family succession.

Araki Yuko as Namiki Mikoto
The daughter of the CEO of Namiki Group. Namiki Takauji’s sister. She is personally worth more than 10 billion yen. She has no interest in other guys her age because her perfect brother Takauji is always around her. She is made a target by Dojima Outaro who considers her the perfect girl in his life.

Sano Hayato as Hasebe Hiroyuki
The son of a big cruise company. He is the childhood friend of Namiki Takauji and Mikoto and has liked Mikoto since he was a kid. Although he is snubbed by her, Dojima Outaro’s moves on Mikoto unleashes his sense of rivalry.

Shison Jun as Osanai Kazuma
A junior host who came to the host club Narcissus. He had also been at the same club where Dojima Outaro previously worked and admires him. He becomes Outaro’s confidant and supporter ,and together with Outaro, closes in on the riddle of the woman who kills with a kiss.

Suda Masaki as Harumi Ittoku
A mysterious street musician who performs near Dojima Outaro’s apartment. An oddball who plays to salarymen and adulterers who have missed the last train. He is somehow philosophical about life and gives Outaro mature advice.

This blog contains information and musings on current and upcoming Japanese dramas but is not intended to be comprehensive.
View all posts by jadefrost →
This entry was posted in NTV, Winter 2018 Dramas and tagged Kadowaki Mugi, Koichi Mantaro, Mitsuishi Ken, Okada Yoshinori, Okunuki Kaoru, Suda Masaki, Todome no Kisu. Bookmark the permalink.