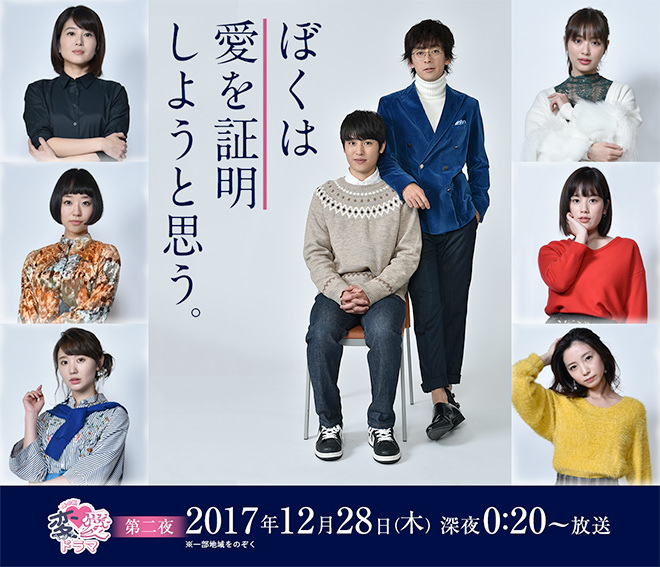 Date: From 12.20 a.m., 29 December 2017
Scriptwriter: Shimada Ureha (Zenryoku Shissou, Koekoi, Sumika Sumire)
Original Work: Boku wa Ai o Shoumei Shiyou to Omou by Fujisawa Kazuki
Cast: Takito Kenichi, Horii Arata, Uchida Rio, Satsukawa Aimi
Synopsis: 26-year-old Watanabe Masaki (Horii Arata) is an unpopular lawyer who keeps having nightmarish breakups. On the day of his girlfriend’s birthday, he discovers that she had been cheating on him. He had merely stolen a glance at her smartphone but got blamed instead. This girlfriend whom he had believed to be his destiny, then dumped him after taking his expensive present away. Masaki unintentionally shows his client Nagasawa Keiichi (Takito Kenichi), an investment company fund manager, that he is in low spirits. Nagasawa offers to listen to his story and this makes him happy. The two of them immediately arrange to meet at a bar chosen by Nagasawa that night. While Masaki is waiting for him, he sees a smooth man suddenly kiss a woman whom he had made a move on. This Nagasawa seems a completely different person from his work persona. Nagasawa is an expert in “romantic engineering”. He diagnoses Masaki as the typical inexperienced, unpopular guy. Moreover, he gets Masaki to speak what he honestly feels and promises to fulfil his wish. Nagasawa sets an example as he begins to impart various romance techniques to Masaki who wants to become popular. Masaki puts his teachings into practice and begins to master them but … …
Official Website: www.tv-asahi.co.jp/bokuai

This blog contains information and musings on current and upcoming Japanese dramas but is not intended to be comprehensive.
View all posts by jadefrost →
This entry was posted in TV Asahi, Winter 2018 Drama Specials and tagged Boku wa Ai o Shoumei Shiyou to Omou, Takito Kenichi. Bookmark the permalink.