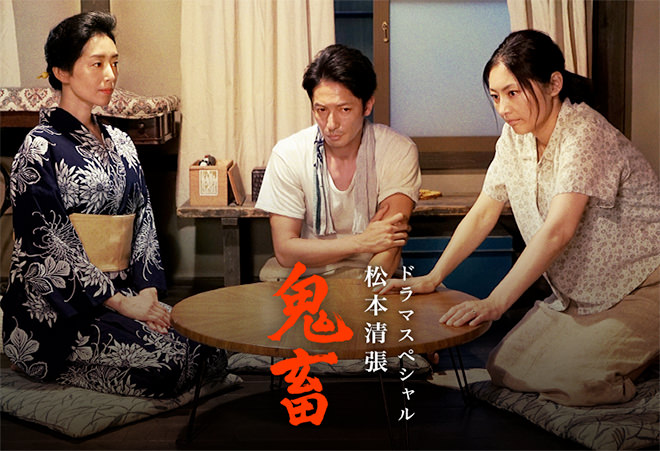 Date: From 9.00 p.m., 24 December 2017
Scriptwriter: Takeyama Yo (Kokuhatsu, Yakkou no Kaidan)
Original Work: Kichiku by Matsumoto Seichou
Cast: Tamaki Hiroshi, Tokiwa Takako, Kimura Tae, Yo Kimiko, Minami Kisa, Maeda Aki, Kondo Yoshimasa, Haba Yuichi, Hiraizumi Sei, Yanagiba Toshiro, Hashizume Isao
Synopsis: It is 1976 in Tokyo’s working class neighbourhood. Takenaka Sokichi (Tamaki Hiroshi) runs a small printing company called Takenaka Printing with his hardworking wife Umeko (Tokiwa Takako). Although they are a subcontractor for large printing companies, they have just brought in a new model of printing machines and business is good. However, fire from the eatery next door quickly burns down their printing facility. Even though this is an emergency situation, Sokichi who went out to entertain printing brokers, is completely uncontactable. In fact, he is at the house of his lover Yamada Kikuyo (Kimura Tae) at this time. He began this secret relationship with her six years ago when she was a waitress at a traditional Japanese restaurant and they even have three children. Two years after the fire, Sokichi and Umeko have opened a printing company on another plot of land with the little insurance money they have. However, business is tough and he is no longer able to send any allowance to Kikuyo. A fed-up Kikuyo storms into his house and comes face to face with Umeko for the first time. Kikuyo openly shows her anger at Sokichi’s indecisive attitude and Umeko who looks down on her. She leaves her three children there and disappears. Sokichi is forced to take them in but Umeko who is only interested in work and hates children, declares that she will not raise the children.
Official Website: www.tv-asahi.co.jp/kichiku

This blog contains information and musings on current and upcoming Japanese dramas but is not intended to be comprehensive.
View all posts by jadefrost →
This entry was posted in TV Asahi, Winter 2018 Drama Specials and tagged Hashizume Isao, Kichiku, Kimura Tae, Matsumoto Seichou, Tamaki Hiroshi, Tokiwa Takako, Yo Kimiko. Bookmark the permalink.