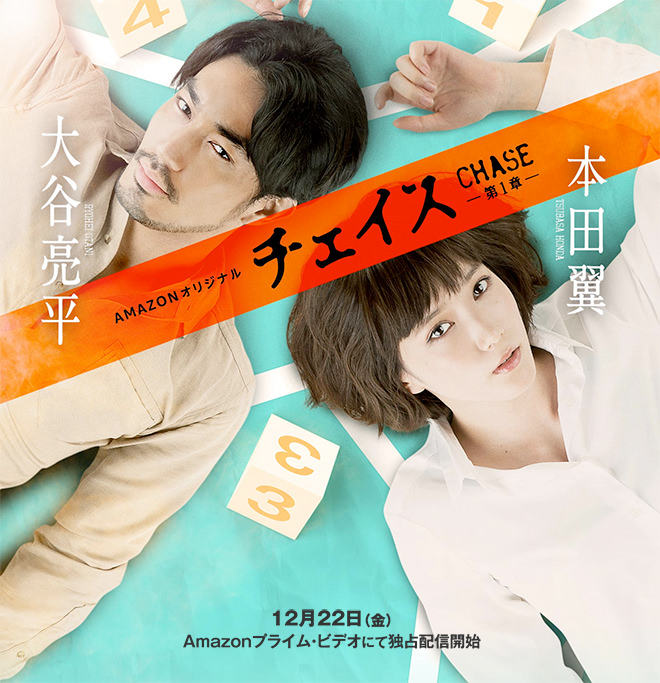 Broadcast
From 22 December 2017 (updated on Fridays)

Story
An incident makes Aizawa Mai, a rookie assistant director who works for a satellite broadcasting station, notice a discrepancy in the unsolved serial murders of five little girls which took place 27 years ago. She suggests a programme on these unsolved cases as her programme proposal. Unfortunately, it is rejected. However, her boss Hasegawa Tadashi sees the potential in the proposal and brings his old friend Mikami Kazuki, a freelance journalist, and Mai together. Neither Mikami nor Mai get along very well with each other but they begin the “chase” for the truth. The method was the same in all five murders and the dead bodies were discovered along the same riverbank. Out of the five murders, a case was built for the third based on the results of the DNA test and a man was convicted. The remaining four cases went unsolved. Why was the man considered guilty only in the third murder? Why was he not charged for the previous two? Why did cases still occur in the same method even after the man was apprehended as the murderer? As Mikami and Mai fumble about in the investigation, they hypothesise that the person serving time in prison might have been falsely charged. Was the DNA test at that time really accurate? The programme on unsolved murders hunts for the truth. Hasegawa who has ignited half-rotten journalism in satellite broadcasting, gets the announcer Saito Makiko, who has absolute power within the station, involved and finally manages to broadcast the programme. Mikami and Mai pursue the truth in the limited time they have before it goes on air. However, the more they investigate the murders, the more they learn about its darkness. The truth is an “untouchable” taboo which entwines the police, the National Research Institute of Police Science, justice and power of the state. What are the limits of the media? However, they begin to expose the truth which was shrouded in darkness through true journalism.

Characters
Otani Ryohei as Mikami Kazuki
An ace freelance journalist. After working at a large newspaper, he became a freelancer in the wake of his wife’s accident. He maybe brusque but he goes after the truth tenaciously. He acts on his own convictions even when he is under all sorts of pressure or the people around him come to a standstill. He has the forcefulness to do whatever it takes.

Honda Tsubasa as Aizawa Mai
An assistant director at BS Tohto. She notices a discrepancy in the in the unsolved serial murders of five little girls which took place 27 years ago. She puts together a documentary programme dealing with false charges. She is the compliant type – the exact opposite to Mikami Kazuki – but she begins to pursue the cases with his help.

Kishitani Goro as Hasegawa Tadashi
The executive producer at BS Tohto. He was once active in the front line of the news programme at headquarters but touched an industry taboo and was forced out to BS Tohto. He is a boss whom Aizawa Mai can turn to and an old friend of Mikami Kazuki. He approves Mai’s proposal. After pulling the two of them together, he supports their hunt for the truth.

Hada Michiko as Saito Makiko
The main newscaster of BS Tohto’s signature programme, the evening news. She has such clout within BS Tohto that she has absolute say in the course of a programme. She is proud and regards the announcers of key bureaus as her enemies.

Tayama Ryosei as Hirayama Eiichi
The bureau chief of BS Tohto. His principle is to avoid trouble. He lost a power struggle and was ousted to BS Tohto. He continues to be bitter about being ordered around by the bureau chief at headquarters who is his junior from student days. He fully supports Aizawa Mai’s proposal because this is about his own face.

Kato Kazuko as Shirai Tetsuko
Yamazaki Noboru’s lawyer who suspected false charges. She continues to believe in Yamazaki’s innocence even after he was found guilty 27 years ago. She is a good adviser to Mikami Kazuki and Aizawa Mai, and holds many keys which will allow them to get to the truth.

Denden as Akasaka Goro
A former detective who arrested Yamazaki Noboru. He is now living in retirement but made a name for himself for fierce investigations and interrogations at the time he was in active duty. He won a confession from Yamazaki through relentless interrogation and managed to arrest him.

Hirata Mitsuru as Yamazaki Noboru
A former nursery school janitor who was arrested as the serial murderer of five little girls which took place 27 years ago. He is a simple, quiet and cowardly man who is not good at talking. He still maintains his innocence.

This blog contains information and musings on current and upcoming Japanese dramas but is not intended to be comprehensive.
View all posts by jadefrost →
This entry was posted in Amazon Prime, Winter 2018 Dramas and tagged Chase Series (Amazon), Hirata Mitsuru, Honda Tsubasa, Kishitani Goro, Otani Ryohei. Bookmark the permalink.