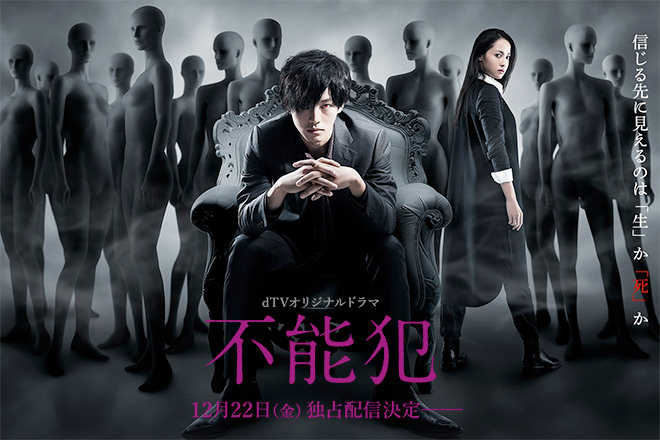 Broadcast
From 22 December 2017 (updated on Fridays) (followed by movie)

Story
Hatred, jealousy, fear – desires which lurk deep within people’s hearts. Usobuki Tadashi is a black-suited killer with red eyes who shows up out of nowhere if someone with strong murderous intent sticks a paper beneath a particular telephone booth. He manipulates people through suggestion and mind control and very easily takes lives without getting his own hands dirty. Those who become his targets will have tragic fates such as the office lady who hides her past while wishing for happiness, the salaryman who can no longer see other people’s hearts because of gambling or the teacher who picks out teenage girls who have runaway from home on online dating sites … …

Kakushitai Kakkou
An exhibitionist who cannot stop posting on social media, Kashima Natsumi (Nagao Mariya) is on cloud nine over her engagement to Kazama Masayuki (Morioka Yutaka), who works for a top company. Kazama is also the son of the CEO and has a high position in society. However, Natsumi appeared in adult videos in the past and wants to hide this from Kazama. But she ends up disclosing her past to Yazaki Taiichi (Suzunosuke), a junior introduced by Kazama. Yazaki, who is a chef at a high-end Japanese restaurant, starts threatening Natsumi and drives her into a corner … …

Kakeru Otoko
Sakurai Koichi (Nagai Masaru) is a salaryman who works for an employment agency. He has a wife Megumi (Megumi) and son. Their son is seriously ill and they have been struggling with the huge medical bills. Meanwhile, the lottery which Sakurai had bought with Sakoda Gaku (Izawa Yuki), a junior at the company, wins 20 million yen. However, when he checks with Sakoda, he is told that he is mistaken and gets brushed off. This makes Sakurai suspect that Sakoda has taken the money and causes their relationship to deteriorate.

Kamachi Site no Akuma
Female users of the “Waiting for God” website where people seek a “god” who will provide money for meals and a place to stay that day, have been targeted in a series of murders. Imai Haruka (Hagiwara Minori), a student of Shinomiya Girls High School, accesses this website with the intention of avenging her friend who was killed by this murderer. After she makes contact with the criminal, she gets detained. Meanwhile, the righteous teacher Anzai Takaya (Hiraoka Yuta), who is popular with students at the school, begins to take action on his own … …

Characters
Matsuzaka Tori as Usobuki Tadashi
A black-suited man who appears at the scenes of a number of unnatural deaths. Although he is a killer who executes hits, no one can prove his crimes because he murders people with methods that cannot be proven.

Sawajiri Erika as Tada Tomoko
A righteous detective who believes that every criminal can be brought to justice and fights against challenging cases and brutal crimes. As she investigates the frequent cases of unnatural deaths, she comes face to face with unexplained phenomenon.

Mikami Kensei as Kijima Isao
The head of Kijima Finance. He ruthlessly punishes people who are unable to repay high-interest loans.

This blog contains information and musings on current and upcoming Japanese dramas but is not intended to be comprehensive.
View all posts by jadefrost →
This entry was posted in dTV, Winter 2018 Dramas and tagged Funouhan, Matsuzaka Tori, Sawajiri Erika. Bookmark the permalink.