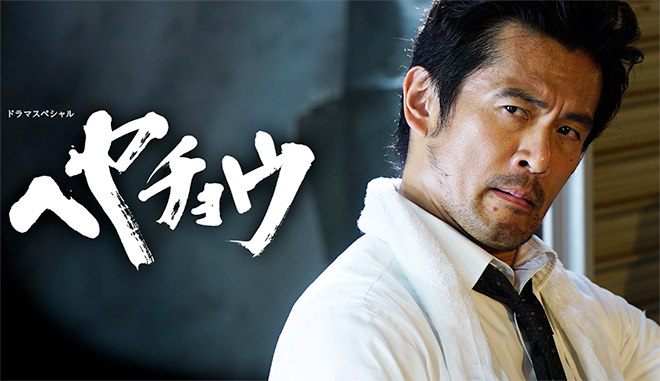 Date: From 9.00 p.m., 17 December 2017
Scriptwriter: Yamamoto Mutsumi (Aibou Seasons 12, 14 & 15, Kounodori, Yae no Sakura)
Original Work: Jidori and Kenkyohyou by Iida Hirohisa
Cast: Uchino Masaaki, Takeda Rina, Hirata Mitsuru, Fukikoshi Mitsuru, Okunuki Kaoru
Synopsis: Detective Kamamoto Nobuhiko (Uchino Masaaki) of the Tokyo Metropolitan Police Department receives a phone call from his good friend and fellow detective Moriyama (Hirano Takahiro) for the first time in ages. Moriyama wishes to discuss something. But Kamamoto is mobilised for an emergency and does not call him back. That night, Moriyama commits suicide with a gun. Accused by Moriyama’s wife Yuriko (Iwasaki Hiromi) of ignoring her husband’s call for help, Kamamoto blames himself and comes home drunk. However, his wife Yukie (Okunuki Kaoru), who should have greeted him, has left home after entrusting the care of her bedridden father Kazuhiko (Ishibashi Renji) to a helper. Yukie has signed and affixed her seal on divorce papers which have been placed on the table. Kamamoto wonders if he is the reason why she left home. His immediate boss Numajiri Satoshi (Hirata Mitsuru) comes to ask him to question a young rookie detective of Higashi Nakano Police Precinct, Tsujimoto Miki (Takeda Rina), who was assaulted while investigating a random attack incident. Miki is the daughter of Assistant Inspector Tsujimoto who was killed in the line of duty. A senior detective whom Kamamoto is indebted to. Yoshizawa Makoto (Fukikoshi Mitsuru), the chief of Higashi Nakano Police Precinct, holds Miki accountable and questions her as if he blames her severely. Kamamoto who was driven out for being a nuisance to Yoshizawa interview Miki. Although Miki did not see the face of her attacker, she easily describes the person’s outfit and build. She yearns to return to the investigation task force for the case. However, Kamamoto responds that that may not be possible because she has become one of the parties involved in the case. Miki expresses frustration. Meanwhile, Kamamoto is taught how to look after his father by the helper. Then he is contacted about a new case. Okazaki (Aoyama Masaru) whose son died in an accident 10 years ago, was murdered at home by someone a suspected robber. His wife Michiyo (Tsutsui Mariko) who was sound asleep at the time the incident happened because she had taken sleeping pills for her insomnia, is dazed by his sudden death. Kamamoto has been assigned to the special investigation task force. But he entreats his boss Ino to let him go back to investigating the random attack incident and together with Miki, begins to investigate the vicinity of the crime scene. Miki is amazed by Kamamoto’s skillful door-to-door inquiry. However, Moriyama’s wife Yuriko is among the people they question. Yuriko responds that she does not interact much with the Okazakis. With her permission, Kamamoto pays his respects in front of Moriyama’s portrait. Miki learns about the relationship between Kamamoto and Moriyama after seeing Yuriko’s cold attitude. She pesters Ino to let her go along for the investigation that night. Kamamoto sharply zeroes in on her and voices his suspicion that she is hiding something. With a tone of resignation, Miki says she wants to help Ino who got her into the Criminal Affairs Division to pay him back. While the investigation into the Okazaki murder case looks like it has reached a dead end, Kamamoto throws a question which he had not voiced at Miki, “You saw the face of the attacker, didn’t you?” Kamamoto saw right through her at the questioning. At those words, Miki finally talks about the facial features of the criminal. She confesses something to Kamamoto. Then a suspect in the Okazaki murder case suddenly emerges through their legwork. This gives the detectives a boost but … …
Official Website: www.tv-asahi.co.jp/heyacho

This blog contains information and musings on current and upcoming Japanese dramas but is not intended to be comprehensive.
View all posts by jadefrost →
This entry was posted in TV Asahi, Winter 2018 Drama Specials and tagged Heyachou, Okunuki Kaoru, Uchino Masaaki. Bookmark the permalink.