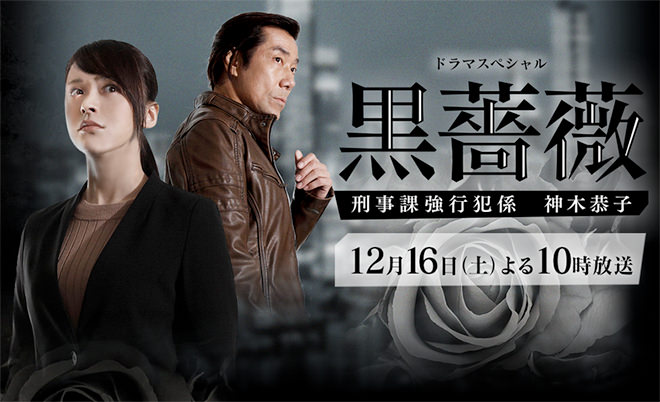 Date: From 10.00 p.m., 16 December 2017
Scriptwriter: Kasuga Mitsuo
Original Work: Kurobara ~ Keijika Kyoukouhan-gakari Kamiki Kyoko by Futagami Go
Cast: Kanjiya Shihori, Kishitani Goro, Nakamura Shunsuke, Nishioka Tokuma, Fukikoshi Mitsuru, Denden, Nogiwa Yoko, Tsugawa Masahiko
Synopsis: Kamiki Kyoko (Kanjiya Shihori) takes up a position in the Violent Crimes Section of Tokyo Rinkai Police Precinct’s Criminal Affairs Department which is busy investigating the murder of the CEO of Biru Cleaning. The arrival of a new female detective during this busy period is considered a nuisance. This is also how senior detective Orihara Keisaku (Kishitani Goro) feels. But Kyoko herself privately thinks it is tough being a detective and has no motivation. As the trainee in the investigation task force, she is tasked with chores by Orihara who has been put in charge of looking after her. However, she cheerfully imagines the criminal’s profile from investigation documents which she happened to see, and tries to investigate on her own. Meanwhile, Kyoko receives a phone call from an elderly man called Yasumoto Tsunekichi (Denden) whom she became acquainted with by chance. His granddaughter Risa (Matsuo Kaoru) is missing and he is certain that she was taken away by his nephew Yoshio (Abe Shinnosuke). But Yoshio left home ever since he stole Yasumoto’s chisel. Through Kyoko’s investigation, the police learn that the wounds of the CEO in the murder case match the shape of the chisel blade which Yoshio took out. It appears that Yoshio went for an interview at Biru Cleaning and resents the CEO for rejecting him. Orihara acknowledges Kyoko’s unexpected talent and begins investigating the case with her on the orders of section head Yano Junichi (Nishioka Tokuma). They find out that Yoshio is holing up with a former fellow prison mate Yamanoi. Under the orders of the head of the Criminal Affairs Department Sena Yasufumi (Nakamura Shunsuke), Orihara, Kyoko and the detectives of the First Investigative Division charge into the place with their guns. Although they find Yoshio and Risa there, Yamanoi is dead at their side. With a knife in his hand, Yoshio tries to escape by using her as a shield. The situation with the detectives becomes volatile, but Orihara shoots Yoshio in the foot and manages to arrest him. Yoshio confesses to murdering the CEO. However, he denies involvement in Yamanoi’s death. On the other hand, Orihara has misgivings about the actions of the First Investigative Division who were at the scene of the arrest. He tells Kyoko that they deliberately provoked Yoshio and wonders if they were inciting him so that they could kill him in self-defence. It was Sena who ordered them to carry guns … … Kyoko is also suspicious of Sena. She puts Risa at home and asks her mother Ayako (Oka Mitsuko) to look after the girl. Her mother tells her about Risa feeling the “scent” of her dead father. It occurs to Kyoko that the smell was also in Yasumoto’s house where Risa had lived. Kyoko questions the frightened girl and discovers the skeletons of two adults under the floor of Yasumoto’s house. The dead bodies are Yasumoto’s wife and the husband of Yoshio’s mother Inui Shigemi (Nogiwa Yoko). Five years ago, Yasumoto was asked by Shigemi, his late sister-in-law, and murdered her husband who was abusing her. He then killed his own wife who notified the police, to silence her. However, Shigemi seduced a detective who turned a blind eye to the crime. That detective was Kyoko’s late father. Kyoko is shocked by Yasumoto’s unexpected statement and for a while, she considers resigning. However, Orihara holds her back and she returns to the investigation. Meanwhile, Orihara ascertains that Sena’s father Sena Eiichiro (Tsugawa Masahiko) was the boss of Kyoko’s father at that time. Unexpected facts begin to be revealed one after another from the murder of the cleaning company CEO … …
Official Website: www.tv-asahi.co.jp/kurobara

This blog contains information and musings on current and upcoming Japanese dramas but is not intended to be comprehensive.
View all posts by jadefrost →
This entry was posted in TV Asahi, Winter 2018 Drama Specials and tagged Kanjiya Shihori, Kishitani Goro, Kurobara. Bookmark the permalink.