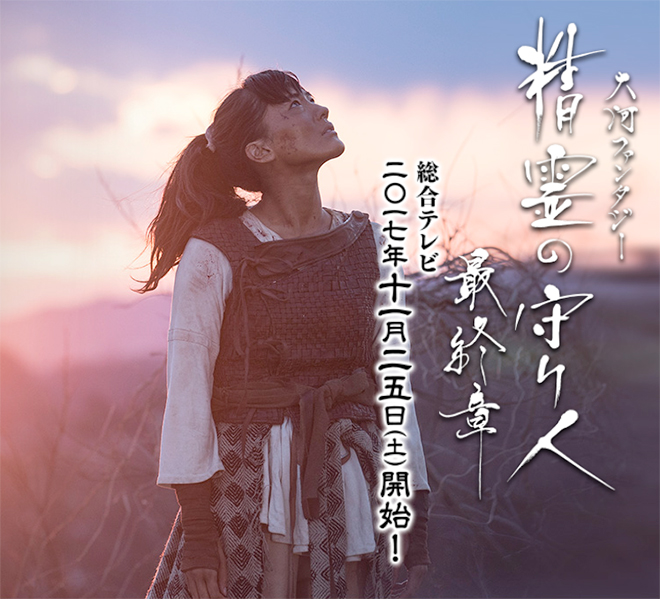 Story
Raul, the second prince of the Talsh Empire, who possesses great power, has crossed the seas and is about to invade the New Yogo Empire any time now. Balsa travels with crown prince Chagum of the New Yogo Empire to see the King of the Kingdom of Kambal. The young boy who survived because he was protected by Balsa, has gone through suffering and grown into a splendid crown prince. Now Chagum swings into action to form an alliance with the neighbouring Kingdom of Kambal and the Kingdom of Rota in order to save his homeland which is on its last legs. For Balsa, this journey to her beautiful homeland of Kingdom of Kambal will also open the door to past secrets which had been sealed. Balsa starts to expose the conspiracy that lies hidden deep in the bowels of Kambal. As Chagum stands up to the attack of the Talsh Empire which has targeted the New Yogo Empire, he turns the tables. The time for a showdown with his father, the Emperor, approaches. A natural disaster occurs that shakes the land. Gold birds flutter in the sky … …

Characters
Ayase Haruka as Balsa
A subject of the Kingdom of Kambal. When she was 6 years old, her father got entangled in the royal family’s intrigue, and his close friend Jiguro brought her out of their homeland. She was drilled in the short spear as a weapon by Jiguro and makes a living as a bodyguard. She becomes the bodyguard of Prince Chagum of the New Yogo Empire. As they continue their journey, she protects him from the Emperor and evil spirits, and establishes a deep relationship of trust with him. With her return to her homeland of Kambal, she not only has to come face-to-face with her own life but also learn the truth of what happened in the past.

Itagaki Mizuki as Chagum
The crown prince of the New Yogo Empire. The egg of the water spirit which dwelled in him, gave him the ability to see the world of spirits and feel unusual phenomenon that ordinary people do not understand. However, this mysterious power and his tolerance caused him to be shunned by his father, the Emperor, and he is sent out of the country. He meets Balsa again after several years and they head to the Kingdom of Kambal together in a bid to form an alliance in preparation for the attack of the Talsh Empire.

Higashide Masahiro as Tanda
A herbalist of the New Yogo Empire and descendant of the indigenous Yaku people. Balsa’s childhood friend. He has been training under the shaman Torogai since young and spending his lifetime searching for Nayugu, another world which is invisible to the eye. He constantly worries about Balsa who has gone on a journey. When the Talsh Empire invades, he is called up for military service in place of his youngest brother and sustains serious injuries.

Kikkawa Koji as Jiguro
The strongest warrior of the elite troops in the Kingdom of Kambal when he was alive. He was called the King’s spear. He was the king’s military instructor and a good friend of Balsa’s father Karuna. He took a young Balsa and fled Kambal at the request of Karuna who got involved in a conspiracy surrounding the throne. As a result, he was branded a traitor. Because the pursuing party sent after him were the King’s spears, saving Balsa’s life meant taking the life of his former friends.

Kamiji Yusuke as Karuna
Balsa’s father. A subject of the Kingdom of Kambal and member of the Yonsa clan. He was the chief physician of the late king Naguru. He is troubled by pressure from the Rogsam, the king’s younger brother, to murder the king. He told his good friend Jiguro about the secret of Naguru’s assassination and decided that he would set Balsa free in exchange for his own life.

Nakamura Shido as Rogsam
The current ruler of the Kingdom of Kambal. He assassinated his sickly older brother Naguru and took the throne on the basis that the country could not become strong unless someone powerful became the ruler. He got Balsa’s father involved in this conspiracy and murdered him. He also sent pursuers after Jiguro who fled with Balsa and tried to assassinate Balsa in the past.

Nakagawa Akinori as Radalle
The son of King Rogsam of the Kingdom of Kambal. He is kind and appears indecisive. However, he learns about his father’s past conspiracy after he meets Balsa and Chagum. After the Luisha ritual, he believes he will protect his people as a king who consider the feelings of others, and sets his sights on building a new kingdom.

Watanabe Ikkei as Kaguro
Jiguro’s older brother. The stern leader of the Musa clan and the King’s spear. The eldest son of the previous clan leader and a man of character. Something in him changes following the appearance of Balsa and Chagum. He is informed by Balsa about the truth surrounding Jiguro which has been under wraps and feels disturbed.

Kora Kengo as Raul
The second prince of the Talsh Empire. He uses his sharp, rational mind to invade other countries. He has many subordinates such as Hugo who come from vassal states because he appoints outstanding people to important positions regardless of their ethnicity. Amid all sorts of conflicting thoughts within the empire, his ambition is now directed at the north where the New Yogo Empire is located and he dispatches troops the frontline.

Dean Fujioka as Ihan
The ruler of the Kingdom of Rota. He succeeded to the throne after his older brother King Yosam died of illness. He fell in love with Asla’s mother Torishia and becomes one of the few people who understand the Talu tribe, especially among the royalty who have strong anti-Talu sentiment. He is pained by his kingdom’s current situation and secretly struggles to bring it under control together with Shihana.

Kaga Takeshi as Master Star Diviner
The highest ranking star diviner who assists the Emperor and administers the New Yogo Empire’s political affairs. Because he has served the Emperor from a young age as his teacher, he knows the Emperor’s mediocrity and wants to determine what Chagum, whom the spirit has chosen, will bring to the empire. As the invasion of the Talsh Empire approaches, he names Shuga his successor and ends his own life.

Fujiwara Tatsuya as Emperor
Chagum’s father. The ruler of the New Yogo Empire who is held in awe by the people. As the descendant of Emperor Torugaru, who came from the southern continent and founded the New Yogo in ancient times after eliminating an evil water spirit, he is regarded to have inherited this divine nature. He dislikes Chagum whom he fears is possessed by something and will become someone with supernatural abilities, and dotes on his younger brother Togum instead. He is tormented about living as a god although he is human.

This blog contains information and musings on current and upcoming Japanese dramas but is not intended to be comprehensive.
View all posts by jadefrost →
This entry was posted in Fall 2017 Dramas, NHK and tagged Ayase Haruka, Higashide Masahiro, Kaga Takeshi, Kora Kengo, Seirei no Moribito Series, Takeda Tetsuya. Bookmark the permalink.