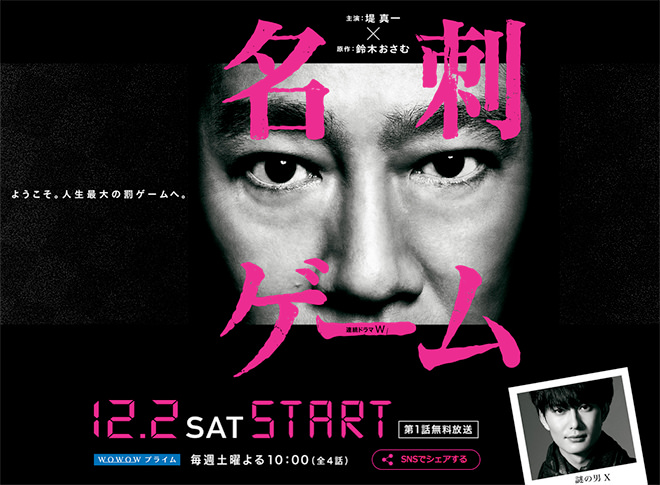 Story
Kanda Tatsuya kicked down his rivals and went on to become a popular quiz show producer and hit maker. One day, a game of death is started by a mysterious man X all of a sudden. When Kanda wakes up, he realises that he has been confined in a boiler room in the basement with a strange collar around his neck. A large amount of name cards are scattered about the floor. Then he notices that his own daughter Minami has been chained to a wall with the same collar around her neck too. X appears in front of a flustered Kanda and proposes a name card game. Kanda has a two-hour time limit to find the name cards he has received from the three men and women in front of him and return them to the correct owners. If he gets it wrong, his own daughter will be blown up in this cruel game. Kanda takes on the game to save her but in the process, his character and numerous misdemeanours are gradually revealed.

Characters
Tsutsumi Shinichi as Kanda Tatsuya
The TV producer of the popular quiz show ‘Mystery Spy’. He will do whatever it takes to get the viewership ratings for his programme. He is also feared for his ruthlessness to staff. In the middle of this, he gets confined by a mysterious man X and has to stake the lives of himself and his daughter Minami on a name card game.

Okada Masaki as X
A mysterious man who confines Kanda Tatsuya and his daughter Minami, and begins a name card game. He declares that entertainment is his objective but the truth is not known. He makes three people who have some kind of relationship with Kanda participate in the game and goes after them with unreasonable terms.

Otomo Karen as Kanda Minami
Kanda Tatsuya’s daughter. A first-year high school student. She is confined by the mysterious X together with her father and becomes a hostage in the name card game.

Kawai Aoba as Ogi Makoto
Participant A in the name card game. She is a lunch box vendor who has a contract with Mystery Spy. Her business has improved due to the large orders from the programme.

Ochiai Motoki as Matsunaga Rui
Participant B in the name card game. A director who works at production company which Mystery Spy’s general director Katayama Shoji set up.

Natsuna as Yamamoto Tsukasa
Participant C in the name card game. The manager of an entertainment agency. She promotes the struggling idol Ohara Maika to Mystery Spy.

Yanagi Yurina as Ohara Maika
A struggling idol who made her debut at the age of 15 and has had a 9-year entertainment career. It is decided that she will appear on Mystery Spy.

Kirishima Reika as Kanda Yumi
Kanda Tatsuya’s wife. They met at a matchmaking party and got married. Although she is beautiful, she is shrewd and calculating.

Horibe Keisuke as Mineta Kiyoshi
The host of Mystery Spy. His signature phrase is “Success!”.

Kajihara Zen as Adachi
A popular television writer. He is involved in Mystery Spy and also has a deep relationship with Kanda Tatsuya.

This blog contains information and musings on current and upcoming Japanese dramas but is not intended to be comprehensive.
View all posts by jadefrost →
This entry was posted in Fall 2017 Dramas, WOWOW and tagged Meishi Game, Okada Masaki, Tsutsumi Shinichi. Bookmark the permalink.