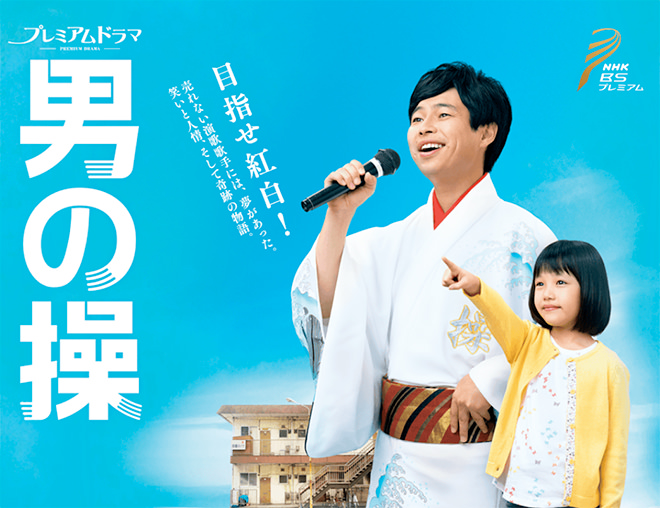 Story
Itsuki Misao is a struggling enka singer whose wife Junko has already passed away. He lives with their daughter Aware who is now an elementary school student. Itsuki and Aware are determined to perform in NHK’s Red and White Singing Contest some day and have been occupied with the steady sales his song ‘Otoko no Misao’. However, sales do not pick up. Itsuki fights for his dream, surrounded by people such as his neighbour Manda Haruko whom he has a tiny crush on, and Shinjo Mari, the company president of the agency which manages him. One day, an exasperated Mari announces to Itsuki that she will dismiss him if he is unable to meet the CD sales target by a certain date. Worried for her father, Aware struggles to help him in his sales. However, she ends up collapsing from over exhaustion. Itsuki gets very depressed. Meanwhile, Haruko next door is also worrying about life … …

Characters
Hamano Kenta as Itsuki Misao
A struggling enka singer. His wife Junko has already passed away and he has been raising their daughter by himself. He has a big dream of performing in NHK’s Red and White Singing Contest with his song ‘Otoko no Misao’.

Kurashina Kana as Itsuki Junko
Itsuki Misao’s late wife. One day when she was at the lowest point in her life, she met Itsuki who was an unknown singer and they got married. She passed away because of an illness. But Itsuki’s promise to her to perform in NHK’s Red and White Singing Contest some day, still keeps him going.

Awano Sari as Itsuki Aware
Itsuki Misao’s only daughter. Even though she is a child, she devotes herself wholeheartedly to making his song ‘Otoko no Misao’ a hit in order to fulfil his dream of performing in NHK’s Red and White Singing Contest.

Kawaei Rina as Manda Haruko
Itsuki Misao’s neighbour. She moved into the apartment next to Itsuki and his daughter. She seems to have something that she does not want anyone to know about. But she begins to smile again as she hears Itsuki’s singing voice from next door. She also establishes an emotional bond with Itsuki.

Adachi Yumi as Shinjo Mari
The CEO from hell who runs Shinjo Production. She gets impatient with Itsuki Misao who has not gained much popularity as a singer and always has harsh words for him. In fact, there is something in her hidden past … …

Sato Ryuta as Mendo Tamotsu
A singer who belongs to Shinjo Production. Itsuki Misao’s senior. Like Itsuki, he is still a long way from achieving success as an enka singer but his cheerful, pleasant personality does not change.

This blog contains information and musings on current and upcoming Japanese dramas but is not intended to be comprehensive.
View all posts by jadefrost →
This entry was posted in Fall 2017 Dramas, NHK and tagged Adachi Yumi, Hamano Kenta, Kurashina Kana, Nemoto Nonji, Otoko no Misao. Bookmark the permalink.