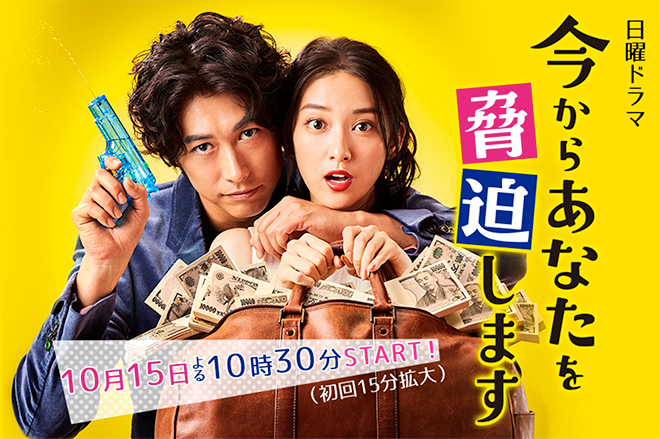 Story
Handsome Senkawa Kanji is a dangerous blackmailer who will solve cases which the police and investigators are unable to by finding people’s weaknesses and manipulating them with threatening words. Kanesaka Mio, a good, nice girl who grew up in a wealthy family, attends the department of education at university. She works part-time and lives modestly but can move money when needed. Mio not only refuses to overlook the slightest bad thing but will also not leave anyone who is in difficulty alone. This results in her always butting into the predicaments of complete strangers and getting involved in cases … … It all starts when a suspicious DVD and phone number from an unknown sender is suddenly sent to her apartment. There is a man who calls himself “Blackmailer” and he has her boyfriend Sato at gunpoint in the video. He demands that she return the money which he was cheated off in a bank transfer scam or he will kill her boyfriend and accomplice. However, Mio knows nothing about this and has never even had a boyfriend. She tells “Blackmailer” that he got the wrong person and this sends him into a frenzy. Senkawa discovers that his target Katsuragi Naoko was the former occupant of Mio’s apartment and pleads with her to forget this incident. However, Mio who is nice to the extent of being eccentric, says she will pay 1 million yen because she wants to save Sato and hangs up the phone on a shocked Senkawa. The next day, Senkawa appears at Mio’s apartment. Mio who has learned that Naoko was the victim of a murder case that occurred nearby, and is on her guard. Senkawa tells her that he has released Sato because his target ended up getting killed. He threatens Mio with death if she interferes in his work and leaves. When Mio returns home, 3 million yen in cash has been delivered to her apartment by an old gentleman. Treating the money like some kind of dirty thing, Mio puts it away in a suitcase inside her closet. The suitcase is already packed with a large amount of banknotes. Meanwhile, Senkawa becomes depressed because he could not help his clients – an elderly couple who were cheated of money in a bank transfer scam. His buddy Meguro who is a thief, breaks into Sato’s apartment while he is out in order to find anything of value. Then the hacker Tochi Otome who has been keeping close tabs on Sato’s GPS, realises that he is visiting Mio’s apartment. Sato apologises for the incident and says that his girlfriend Naoko turned to scamming to repay her 3 million yen gambling debt. He blames himself and vows to seek revenge for her. Mio will pay off the debt and wants him to stop his revenge but … … At that moment, Senkawa hears from Meguro that Fuwa Tetsuo, the boss of a group of swindlers Fuwa-gumi, is searching for Sato. He figures that the Fuwa-gumi killed Nao who tried to run away with their money, and comes up with the idea to blackmail Fuwa. However, in the middle of this important exercise, Senkawa receives persistent phones calls from Mio which interrupts him in a case of bad timing. The coincidental encounter between Senkawa and Mio causes an unexpected development in the case. These two polar opposites who should have never crossed paths end up getting involved in all sorts of cases from bank transfer scams to kidnappings.

Characters
Dean Fujioka as Senkawa Kanji
The “Blackmailer” who will blackmail a person after he receives a commission. He is excellent at investigating and taking action, and has a good reputation in the underworld. He looks refreshingly handsome but has an odd fashion sense. He is usually a lazy, frivolous person who loves to make silly jokes even though nobody pays him any attention.

Takei Emi as Kanesaka Mio
A university student who attends the faculty of education. She is nice to the extent of eccentricity. The slightest bit of evil bothers her and she often sticks her nose into the problems of strangers. She is pretty but has never had a boyfriend. Although she lives modestly while working part-time, she is actually a rich girl who can actually move tens of millions of yen when needed.

Miyake Hiroki as Meguro
Senkawa Kanji’s partner. A remarkable thief who can pick open any lock in a few seconds. He is good at undercover investigations where he disguises himself. He is always kind and a man of few words. He calmly responds and chides Senkawa who gets carried away easily. Cooking is his interest but his taste is questionable.

Shimazaki Haruka as Tochi Otome
A hacker whose makeup and nail art are her trademarks. She studied hard and became a hacker after she was angered by an ex-boyfriend who called her a fool with no saving grace. She is emotionally attached to the down-to-earth Kanesaka Mio.

Suzuki Nobuyuki as Kyoda Kaoru
A young man who has moved into the apartment building where Kanesaka Mio lives. He has lively conversations with Mio and has a good impression of her.

Kondo Masaomi as Todoroki Yunosuke
Kanesaka Mio’s grandfather. He does not have a good relationship with her and does not consider her family.

This blog contains information and musings on current and upcoming Japanese dramas but is not intended to be comprehensive.
View all posts by jadefrost →
This entry was posted in Fall 2017 Dramas, NTV and tagged Dean Fujioka, Ima kara Anata o Kyohaku Shimasu, Takei Emi. Bookmark the permalink.