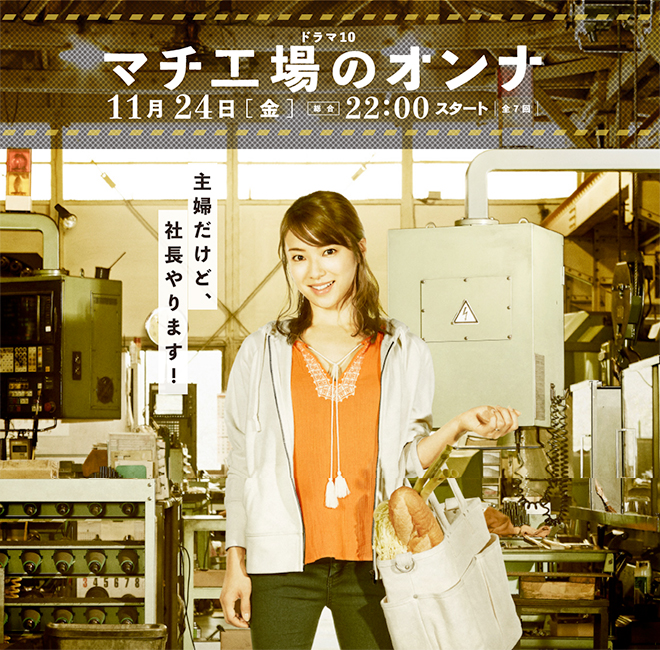 Story
32-year-old Arimoto Hikaru lives in the suburbs of Nagoya with her husband Masaru who works for an automotive parts manufacturer, and their son Kota. One day, her father Taizo collapses from overwork. This comes as a shock to her mother Yuriko and his workers. When Hikaru goes to see him, she is told by the doctor that he has four days to live because of cancer. Her father tried to raised her to succeed his factory in place of her older brother who died young, but she rebelled against him and became a housewife. Hikaru cannot express herself honestly even in front of her father. However, she learns of his attempts to protect the family-run business and finally makes up her mind to succeed him as the CEO. Taizo suddenly passes away and Hikaru is declared the CEO of the factory which is on the verge of bankruptcy. She faces one ordeal after another. Masaru whom she had intended to depend on, goes to the US alone for work. Management staff Katsumata Tsutomu and Hanada Junzo who see her as a figurehead are strongly opposed to what she does. She gets brushed off by the bank that is factory’s business partner for being female and pressed to merge with another factory. Hikaru made a promise to her father to protect the factory. Will she be able to turn the business around.

Characters
Uchiyama Rina as Arimoto Hikaru
The only daughter of the Sudos. Her older brother passed away at a young age and she was raised like a boy by her father Taizo. After marriage to Arimoto Masaru who had worked in the same company, she lives as a housewife with him and their son.

Nagai Masaru as Arimoto Masaru
Arimoto Hikaru’s husband. He works for a an automotive parts manufacturer. He is cheerful, accommodating and devoted to his family. There are times when he takes bold action. He is the outdoors type and loves fishing.

Oshinari Shugo as Uchikoshi Kazuya
Dahlia Seiki’s accountant. A former banker. He is cool and does not express his feelings very much but is secretly passionate inside.

Yanagisawa Shingo as Hanada Junzo
A veteran worker at Dahlia Seiki and a member from the time the company was established. He is compassionate and talkative.

Takenaka Naoto as Katsumata Tsutomu
A veteran worker at Dahlia Seiki. He established the company with Sudo Taizo and Hanada Junzo, and has the best technical skills in the company. He is obstinate and hard to please. He is no match for his wife Toshie.

Tachi Hiroshi as Sudo Taizo
Arimoto Hikaru’s father. The CEO of the small factory Dahlia Seiki. Although he runs things his own way, his employees are like family to him. He is estranged from his daughter now as as a result of his tough discipline. Horse racing is his pastime.

Ichige Yoshie as Sudo Yuriko
Sudo Taizo’s wife and Arimoto Hikaru’s mother. She is always serene and also a little prone to silly mistakes. She leaves the management of the company to her husband while she watches out for the family.

This blog contains information and musings on current and upcoming Japanese dramas but is not intended to be comprehensive.
View all posts by jadefrost →
This entry was posted in Fall 2017 Dramas, NHK and tagged Machi Koba no Onna, Tachi Hiroshi, Uchiyama Rina. Bookmark the permalink.

1 Response to Machi Koba no Onna