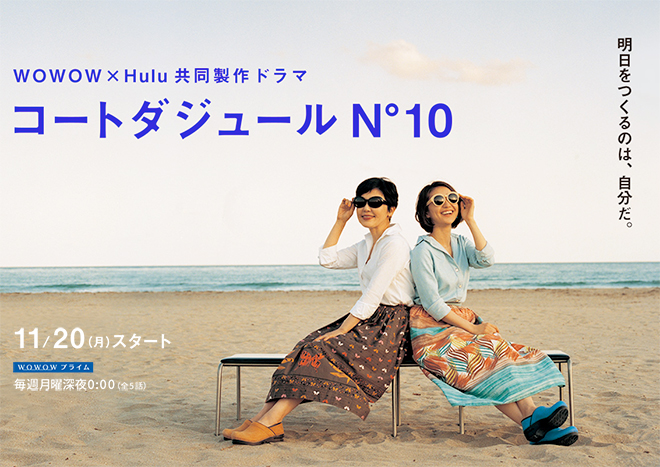 Episode 1: Mukashi no Tomodachi
Synopsis: Hara Kumi (Kobayashi Satomi) and Tendo Aiko (Oshima Yuko) meet for the first time in years at the funeral of Aki, an older friend whom they became acquainted with at a Hakuba ski area. Then there is Shibata Shimako (Matsu Takako). The three of them talk about their respective recollections of being influenced by Aki. The atmosphere back then has not dimmed with the passage of time. On the contrary, it floods back to them.
Cast: Kobayashi Satomi, Oshima Yuko, Matsu Takako

Episode 2: Shinonome
Synopsis: Mukai Chiho (Oshima Yuko) manages a small restaurant by herself. Anzai Hanae (Kobayashi Satomi), whom she is slightly acquainted with, and Inamura Kansuke (Kaneko Nobuaki), a first-time customer, arrive. Having met by chance, the three of them have a deep, quiet conversation for a night, told as if they have met midway through their journey of life for maybe the first and only time.
Cast: Kobayashi Satomi, Oshima Yuko, Kaneko Nobuaki

Episode 3: Ongaeshi
Synopsis: Two investigators tail a man. Kudo Michiru (Kobayashi Satomi) in an inappropriate red long dress and Asano Kaho (Oshima Yuko) in red stilettos. This incongruous pair find themselves in an unexpectedly difficult situation. At that moment, a typical suspicious and mysterious man (Bengal) seeming as if waiting for that moment to help. The two of them are cautious but the story develops unexpectedly.
Cast: Kobayashi Satomi, Oshima Yuko, Bengal

Episode 4: Sentimental Journey
Synopsis: Actors are waiting for nightfall on the set of a drama. While they are talking about nothing in particular, the conversation takes an unexpected turn. In the middle of the flow of conversation, Kono Keisuke (Emoto Tokio), the youngest actor, reveals a worry. Two actresses Naka Shinobu (Kobayashi Satomi) and Aso Mari (Oshima Yuko) who heard this, offer witty advice. Kono soon makes some decision.
Cast: Kobayashi Satomi, Oshima Yuko, Emoto Tokio

Episode 5: Shiratori Dance Academy
Synopsis: Shiratori Dance Academy is a ballroom dance studio. One day, the dance instructor Shiratori Michiru (Kobayashi Satomi) asks if her youngest student Yamamoto Mika (Oshima Yuko) and Goto Hiroshi (Mitsuishi Ken) who is old enough to be Mika’s father, want to enter a competition. The unrelenting Shiratori begins to give a perplexed Mika and the typically reserved Goto hard training. The two of them seem to lose heart and she gets an outrageous idea.
Cast: Kobayashi Satomi, Oshima Yuko, Mitsuishi Ken

This blog contains information and musings on current and upcoming Japanese dramas but is not intended to be comprehensive.
View all posts by jadefrost →
This entry was posted in Fall 2017 Dramas, Hulu, WOWOW and tagged Cote d'Azur No.10, Kobayashi Satomi, Kudo Kankuro, Matsu Takako, Mitsuishi Ken. Bookmark the permalink.