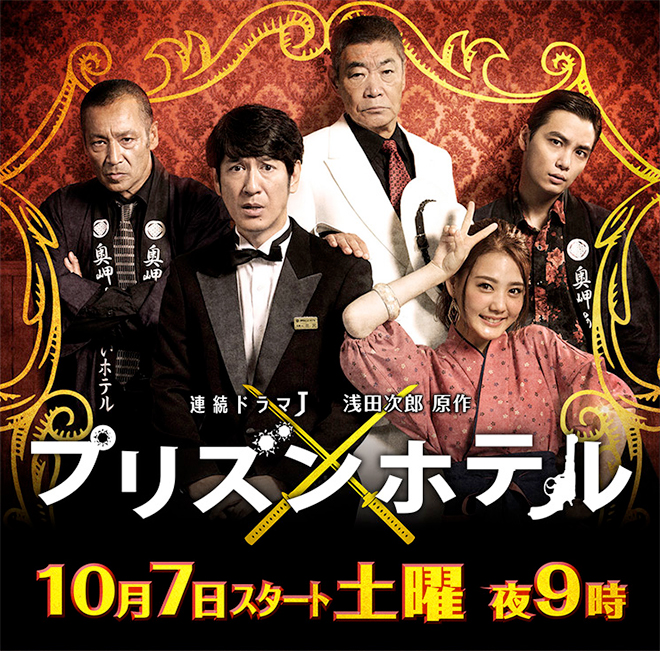 Story
Hanazawa Kazuma has worked for the Crown Hotel Group, Japan’s leading hotel chain, for 25 years. He gets his long-coveted title of manager and triumphantly arrives at Okumisaki Ajisai Hotel which he has been posted to. However, Hanzawa is welcomed by fierce-looking men and foreign workers. The hotel’s owner Kido Nakazo is a big-shot yakuza. Even the guests are yakuza. Then it hits Hanazawa. The hotel is being run by Nakazo’s henchmen as a hotel that caters to the needs of yakuza who are not generally welcomed by hotels for group events, and they are unable to enjoy the large communal baths along with other people due to the attention their tattoos attract. In fact, people call this place “Prison Hotel”. The situation is beyond Hanzawa’s imagination and gives him a shock. He wonders if he has been demoted. In spite of that, guests come to the Prison Hotel. Popular writer Kido Konosuke visits in the company of his common-law wife Kiyoko and her daughter Mika from a previous marriage. But Konosuke is violent towards her and the girl because of his cowardice and eccentricity. Unable to just watch without doing anything, Hanzawa decides to stand up for them. Meanwhile, Konosuke meets Yano Masao, a gangster and fellow hotel guest who has just finished serving time in prison. He learns some shocking facts which leads him to come up with a destructive plan. To top it off, a hitman whose target is Nakazo, shows up at the hotel and Hanzawa panics … …

This blog contains information and musings on current and upcoming Japanese dramas but is not intended to be comprehensive.
View all posts by jadefrost →
This entry was posted in BS Japan, Fall 2017 Dramas and tagged Emoto Akira, Fukikoshi Mitsuru, Prison Hotel, Sato Eriko, Tanaka Naoki, Toyohara Kosuke. Bookmark the permalink.