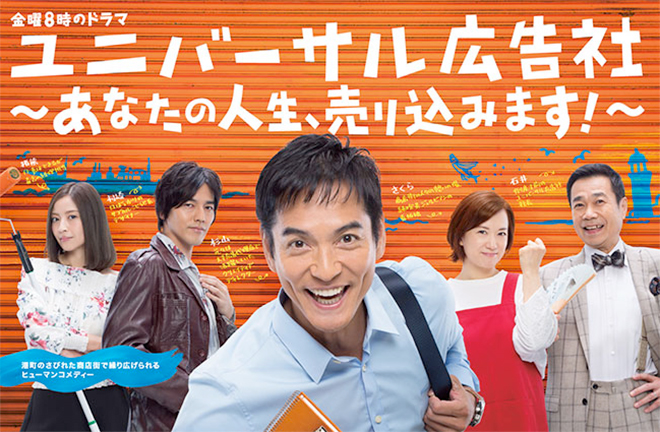 Story
Sugiyama Toshifumi was once successful ad man at a top advertising agency. He made a success of many projects and there was even a time where he was the darling of the period. Believing in his own power, he stomped out and thought of striking out on his own. But things did not go as well as he imagined. He could not get a job and just as Sugiyama was forsaken by even his wife and child, he was picked up by Ishii Kenichiro, the CEO of Universal Advertising, a small advertising firm, where he now works as copywriter. After a run of bad luck and the depressed economy, Universal Advertising was forced to relocate from its Tokyo office and eventually settles at a deserted shopping street of a small port town. However, even in such a lifeless place, there are troubles and small commissions, and therefore work. On the day of the move, they get a unreasonable demand from their main client unexpectedly. Will Sugiyama and the rest be able to overcome this crisis? This is the beginning of Universal Advertising’s new fight.

Characters
Sawamura Ikki as Sugiyama Toshifumi
Universal Advertising’s creative director. He once worked at a top advertising agency and there was even a time where he was the darling of the period. His life could not be better. But there was a dispute at work and he quit. One thing led to another, he was picked up by this very small and weak advertising firm and started to work. He does not say it but he has a deep love for advertising work.

Wakui Emi as Fujisawa Sakura
The daughter of the owner of the coffee shop, Je Reviens, the place to relax. She works together with her father. She is not unmotivated but there are no customers and as shops on the shopping street begin to disappear, she despairs about her single life and future. She thinks that she must do something as the days go by.

Katase Nana as Inokuma Erika
Universal Advertising’s administrative officer. Although she is curt, she does a thorough job. Despite being capable at work, it seems that she has pushed on in a side job because there is no work environment where she can make the best of her skills. There is also gossip that she has racked up high prices for clothes and personal belongings that can hardly be expected of an administrative position. She is beautiful but not very popular because she is scary.

Kaname Jun as Murasaki Rokuro
Universal Advertising’s designer. He constantly complains and talks bad about other people. But he does not even know about his own lack of ability. He is unusually jealous of Sugiyama Toshifumi who was once a top copywriter and just picks fights with him. He lives in a camper van and seems satisfied with single life but is actually lonely … …

Miyake Yuji as Ishii Kenichiro
The CEO of Universal Advertising which is on the brink of bankruptcy. He met Sugiyama Toshifumi at a drinking spot and picked him up as an employee. He is a good man and has a remarkable love for advertising but he has practically no taste or talent. He had expected that there would be more business by hiring Sugiyama who was a famous ad man at one time. But at present, there has been none. He is afraid of his wife and grown up daughter. Coming to the office is the only thing he looks forward to.

This blog contains information and musings on current and upcoming Japanese dramas but is not intended to be comprehensive.
View all posts by jadefrost →
This entry was posted in Fall 2017 Dramas, TV Tokyo and tagged Okada Yoshikazu, Sawamura Ikki, Universal Koukokusha, Wakui Emi. Bookmark the permalink.