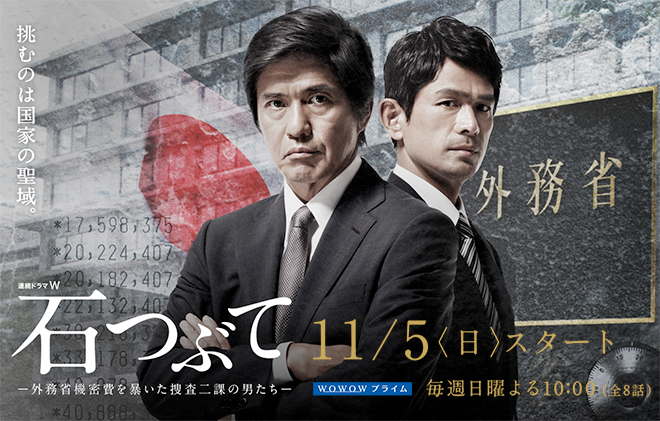 Story
Saimi Teruaki is assigned to head the White Collar Crime Information Section of the Tokyo Metropolitan Police Department’s Second Investigation Division. The obstinate detective Kizaki Mutsuto, whom he had joint investigations with during his Fourth Investigation Division days, belongs to this section. At this moment, Kizaki is at the office of a former Diet lawmaker whom he visits frequently to gather information. He learns that a non-career officer at the Ministry of Foreign Affairs is suspected of bribery just when Kyushu-Okinawa Summit is fixed. It is a period where an outrageous budget has been decided for the ministry. Kizaki cannot contain his excitement at the allegation against the Ministry of Foreign Affairs which is considered untouchable even among the ministries and government offices. However, he has had experience of being crushed by political pressure after investigation information against the Cabinet Office was leaked so he completely refuses to share investigation information even with his superiors. Saimi’s intuition tells him that Kizaki is targeting a great opponent in the form of the Ministry of Foreign Affairs. He emphasises the madness of investigating alone and tries to get close to Kizaki. Meanwhile, this allegation against the Ministry of Foreign Affairs soon develops into a big case which shakes the government and bureaucracy, and the wall of the nation stands in front of them.

Characters
Sato Koichi as Kizaki Mutsuto
A senior detective of the First White Collar Crime Information Section. Rank: Assistant Inspector. A brusque, straightforward man, he is a detective who is tenacious in exposing corruption but far from career progression. He takes pains to keep information confidential due to his past experience of being betrayed by a superior in the Second Investigation Division. He has the strongest sense of pride as a detective of the Second Investigation Division.

Kitamura Kazuki as Manase Kazunori
The head of Ministry of Foreign Affairs’ Overseas Visit Support Division. An influential non-career officer who has held the post since 1993 as the successor of Akimura Atsuro. He accompanies overseas summits and leaders on trips abroad, and takes thorough care of them.

Hagiwara Masato as Higashida Masayuki
The head of the Second Investigation Division. Rank: Assistant Commissioner. A career officer who has been in the Second Investigation Division since he joined the Tokyo Metropolitan Police Department and has great confidence in white collar crime investigations. He has a sense of righteousness and also great empathy. His favourite book is Chinese historian Sima Qian’s Historical Records.

Iitoyo Marie as Yagura Kasumi
A young detective of the First White Collar Crime Information Section. Rank: Officer. She was selected by the Second Investigation Division from a police precinct under its jurisdiction three years ago. Because chores such as the compilation of news stories are her primary responsibility, she has not been able to fulfill her original wish(es). But she is determined to get information some day.

Matobu Sei as Sugiya Akane
Manase Kazunori’s lover. A nurse at the government-run Yamanote Hospital. She met Manase when she was sent by the country as a nurse during the 1996 siege of its embassy in Peru by guerrillas. She is generous and surrounds him with love. She is his most-beloved woman.

Sugata Shun as Hazama Katsuo
A senior detective of the Fourth White Collar Crime Section. Rank: Assistant Inspector. He is called the best instant water heater of three white collar crime sections. Many people are afraid of him. He constantly regards the White Collar Crime Information Section as an enemy. However, he is the best at interrogations. It is said that once anyone is in his hands, they will open up. He and Kizaki Mutsuto are high school graduates who joined the Tokyo Metropolitan Police Department at the same time.

Ishizaki Natsumi as Wakaki Marie
Manase Kazunori’s former lover. A counter staff at Aoba Bank’s Toranomon branch. Helped by Manase who is a big client of Aoba Bank, she gained the trust of the branch manager. After that, she became Manase’s lover even though she has a fiance whom she has been dating since university days.

Haba Yuichi as Akimura Atsuro
The deputy chief of the Ministry of Foreign Affairs’ Western Europe Bureau’s First Division. A non-career officer who headed the Overseas Visit Support Division previously. At the Kyushu-Okinawa Summit, he loses controlling Okinawa to his rival Manase Kazunori.

Tanaka Ken as Suzuhara Shoichi
The chief of the Ministry of Foreign Affairs’ General Affairs Bureau’s General Administration Division. A career officer. He has worked as Sawai Kunpei’s subordinates since he joined the ministry and is Sawai’s minion.

Yamada Meikyo as Sawai Kunpei
The chief of the Ministry of Foreign Affairs’ General Affairs Bureau. A career officer. He takes Manase Kazunori who does his best as a non-career officer, under his wings.

Sano Shiro as Anzai Toshiharu
The chief of the Ministry of Foreign Affairs’ Secretariat Bureau. A career officer with connections to the cabinet. He will stop at nothing to protect the ministry. He observes Manase Kazunori’s movements more closely than anyone else.

This blog contains information and musings on current and upcoming Japanese dramas but is not intended to be comprehensive.
View all posts by jadefrost →
This entry was posted in Fall 2017 Dramas, WOWOW and tagged Eguchi Yosuke, Ishi Tsubute, Kitamura Kazuki, Sano Shiro, Sato Koichi, Tanaka Ken. Bookmark the permalink.