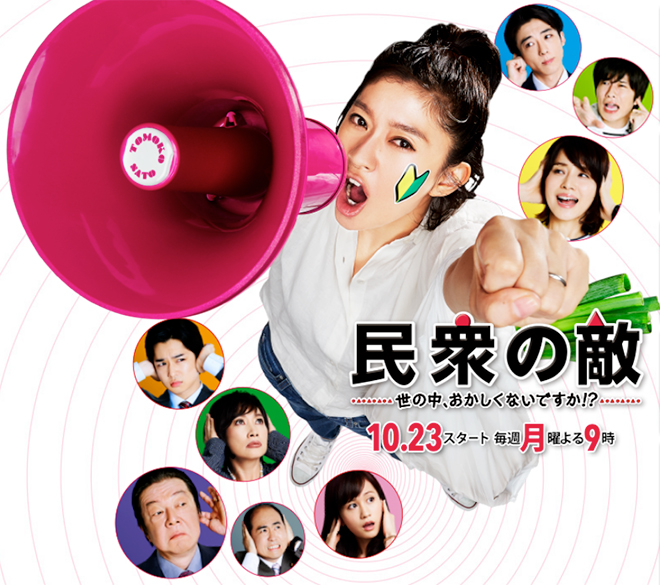 Story
Sato Tomoko is an ordinary housewife who lives with her husband Kohei and young son Shunpei in a cramped housing complex. She has to work part-time to supplement the household income. Nonetheless, they are a loving, happy family. Tomoko wants to live a happier life with small luxuries. She has led a very complicated life up until now. Her parents disappeared one after another. So she dropped out of high school and worked in many part-time jobs. Tomoko wants to let her son eat genuine steak, take him to and from nursery school on an electric bicycle … … But Tomoko and Kohei never last long in any job. They instinctively resist unreasonable duties and quickly end up getting fired. At one point, both husband and wife lose their jobs at the same time. One day, Tomoko searches for a new job on the internet but has difficulty finding one. She is in her 40s, a high school dropout and has no qualifications. How is she to get a job? Then she suddenly looks up “city council member” because she saw a city council member who embezzled funds for political activities in the news. This is how she learns that the election rate for a member of Aoba City Council where she lives is more than 80%. This is a high probability compared to her finding work. The annual salary of a city council member is a dream to Tomoko. Equating huge pay with family happiness, the foolhardy Tomoko immediately declares to Kohei that she is standing in the election. Husband and wife withdraw their savings as the deposit required to run for the city council and register her candidacy at the electoral committee. However, the election race has already started. Tomoko and Kohei observe the campaign speech of a current city council member, Isobe Shinzo. Then a woman seethes that Isobe’s words are all lies. She is Hirata Kazumi, a friend whose child attends the same nursery school as Shunpei. When Tomoko tells Kazumi about her candidacy, she leaves speechless. Besides Isobe, there are other candidates in the election race such as Todo Makoto who comes from a long line of politicians … …

Characters
Shinohara Ryoko as Sato Tomoko
A new member of the Aoba City Council. She lives with her husband Kohei and their young son. Both her parents disappeared one after another. She felt abandoned and dropped out of high school. Not wanting to be like her parents, she has lived honestly. She met Kohei when she worked part-time and they got married. But he keeps changing part-time jobs and she has to help with the household finances through part-time work. However, she cannot accept the company’s rules and gets sacked for defiance. Then she sees the big paychecks of city council member. Equating a hefty salary with family happiness, she recklessly runs for the city council and narrowly gets elected.

Takahashi Issei as Todo Makoto
A new member of the Aoba City Council. He had a privileged upbringing as the second son in a long line of politicians and eventually even the premiership. He is the “prince” of the municipal government who comes face to face with Sato Tomoko. There were times when he did not want to become a politician but he could not stray from the path laid out for him. He wrestles with himself and gets tormented. But gradually becomes twisted and develops another side which no one knows … …

Furuta Arata as Inuzaki Kazuhisa
The boss of a city council. A man with a few peculiarities. He has served as a city council member for a long time and has strong connections to the Diet and business community. He does not become the leader himself but controls people from behind the scenes and forms the Inuzaki faction which is the largest faction. At first, he thinks nothing of Sato Tomoko but this gradually begins to change.

Yo Kimiko as Kawarada Akiko
She enjoys overwhelming popularity and brilliantly won the election to be the governor because of her clean image, American-trained skill at debating and sophisticated charm. Women adore her. She strikes an adversarial stance towards Inuzaki Kazuhisa and sets out to put an end to all sorts of patronage.

Osumi Kenya as Maeda Yasushi
A veteran city council member who belongs to Inuzaki Kazuhisa’s faction. He plays an active role in the revolt against the governor’s faction which is opposed to the Inuzaki faction. He develops a connection with Sato Tomoko after some incident … …

Tanaka Kei as Sato Kohei
Sato Tomoko’s husband. He fell in love at first sight, aggressively pursued her and they got married. They are now a family of three. Because he is kind and always considerate of other people’s feelings, he ends up getting stressed. He wholeheartedly supports Tomoko after she becomes an elected member of the city council.

Ishida Yuriko as Hirata Kazumi
A former political journalist who worked for a newspaper. However, her circumstances changed after she turned 40 and gave birth to her daughter. After she returned from maternity leave, she was assigned a desk job even though she was an outstanding journalist. Because resigning from her job now would mean the end of her career, she acts as a “capable woman”. At this point, she sees the ability of Sato Tomoko to take action and unify people, and becomes her supporter.

This blog contains information and musings on current and upcoming Japanese dramas but is not intended to be comprehensive.
View all posts by jadefrost →
This entry was posted in Fall 2017 Dramas, Fuji TV and tagged Furuta Arata, Ishida Yuriko, Minshuu no Teki, Shinohara Ryoko, Takahashi Issei, Yo Kimiko. Bookmark the permalink.