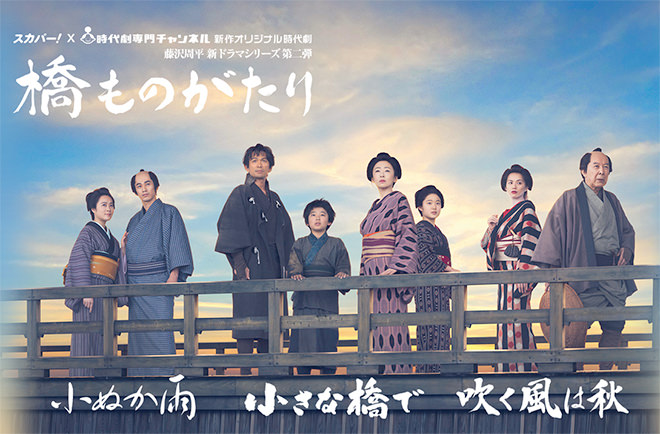 Fuku Kaze wa Aki
Date: From 6.00 p.m., 21 October 2017
Scriptwriter: Kaneko Narito (Crossroad, Tsuma wa Kunoichi Series, Sarutobi Sansei)
Original Work: Fuku Kaze wa Aki by Fujisawa Shuhei
Cast: Hashizume Isao, Usuda Asami, Namioka Kazuki, Tayama Ryosei, Iwamatsu Ryo, Sugimoto Tetta
Synopsis: Yahei (Hashizume Isao) is an elderly gambler who betrayed his chief and left Edo for a short while to let things to cool down. However, he is at an advanced age and feels homesick for the place he is used to living in. Fully prepared to die, he resolutely crosses the bridge to Edo again. On the day of Yahei’s return to Edo, he meets a woman called Osayo who is absently gazing at the setting sun, in front of a brothel. Osayo is a woman who has sold her body as collateral for her husband who set up a sundries shop. Something about her reminds Yahei of his late wife. He becomes attracted to her for some reason. On another day, Yahei visits the tenement house where her husband and children live. However, he sees her husband spend all his time gambling without working … …

Konukaame
Date: From 6.00 p.m., 22 October 2017
Scriptwriter: Nakamura Tsutomu
Original Work: Konukaame by Fujisawa Shuhei
Cast: Kitano Kii, Nagayama Kento, Honda Hirotaro, Nishina Takashi
Synopsis: Osumi’s (Kitano Kii) parents died young and she grew up without many memories as a daughter. She now lives alone in a footwear shop which her uncle has put her in charge of. Marriage has also been arranged with a rough craftsman Katsuzo without regard for her wishes. She just passes her days, living life without hope for the future. One night, a young man (Nagayama Kento) seeks refuge in Osumi’s house all of a sudden. The neatly dressed man wants her to hide him because he is being pursued over a quarrel and calls her “Miss”. Osumi feels her heart flutter in response. Thinking that there is no danger in hiding him, Osumi decides to shelter him. However, she soon learns that his name is Shinshichi and he is being pursued for killing someone.

Chiisana Hashi de
Date: From 6.00 p.m., 3 November 2017
Scriptwriter: Kobayashi Masahiro (Tachibana Noboru Seishun Tebikae Series)
Original Work: Chiisana Hashi de by Fujisawa Shuhei
Cast: Matsuyuki Yasuko, Tanaka Kanau, Fujino Ryoko, Eguchi Yosuke, Kakei Toshio, Sasano Takashi, Matsui Rena, Nakamura Baijaku
Synopsis: 10-year-old Hirotsugu (Tanaka Kanau) has been living with his mother Omaki (Matsuyuki Yasuko) and older sister Oryo (Fujino Ryoko) ever since his father Tamizo (Eguchi Yosuke) suddenly vanished four years ago. Omaki works hard at a tavern while complaining bitterly about Tamizo for leaving her. Hirotsugu watches her with mixed feelings. Then one day, Oryo who has been constantly bickering with their mother, elopes with a married man. Omaki is physically and emotionally drained from the loss of her daughter too, and tries to throw herself at the tavern’s regular customers. Hirotsugu feels disgusted by his mother. He abandons his housework and lies down in a field of reeds. That is when he unexpectedly encounters his father who is being pursued by men.

This blog contains information and musings on current and upcoming Japanese dramas but is not intended to be comprehensive.
View all posts by jadefrost →
This entry was posted in BS Sky Perfect, Fall 2017 Dramas and tagged Eguchi Yosuke, Matsuyuki Yasuko, Nagayama Kento. Bookmark the permalink.