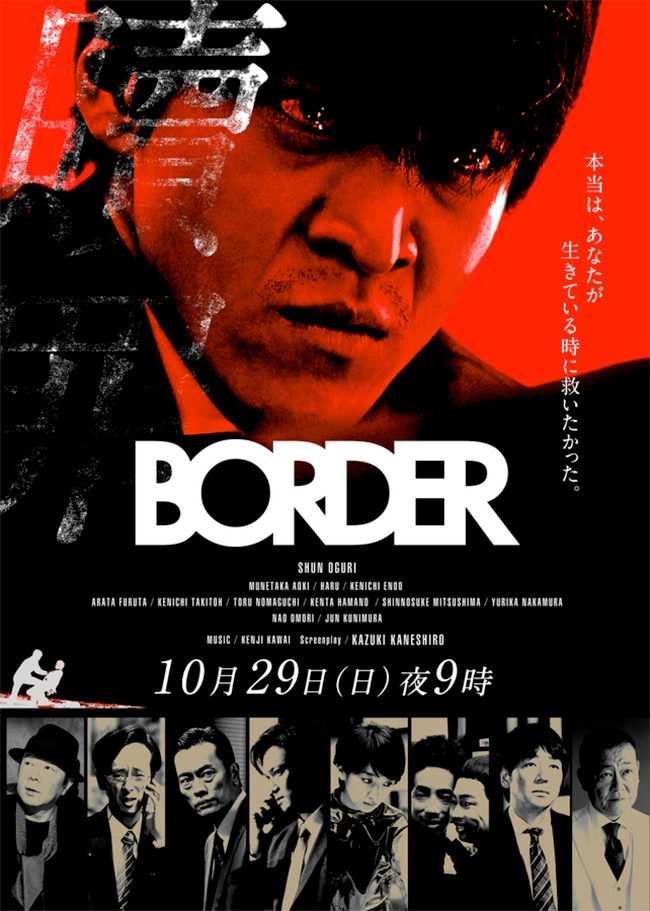 Date: From 9.00 p.m., 29 October 2017
Scriptwriter: Kaneshiro Kazuki (Okusama wa Toriatsukai Chuui, Crisis, Border)
Cast: Oguri Shun, Aoki Munetaka, Haru, Furuta Arata, Takito Kenichi, Hamano Kenta, Nomaguchi Toru, Endo Kenichi, Omori Nao, Mitsushima Shinnosuke, Nakamura Yurika, Kunimura Jun
Synopsis: Ishikawa Ango (Oguri Shun) is an ambitious and hardworking detective of the First Investigative Division’s Fourth Murder Investigation Section First Unit at the Tokyo Metropolitan Police Department. He developed the special ability to communicate with the dead after a bullet lodged near the artery at the base of his brain. Listening to the voices of the dead victims fuels his sense of righteousness and he tries to solve cases and capture criminals. But the stronger his desire to carry out justice grows, the more dangerous he becomes. He even enlists the help of the underworld in fabricating evidence. Ishikawa eventually has a showdown with Ando Chikao (Omori Nao) who kidnapped and murdered his own 8-year-old son on the rooftop of an apartment building. At that time, Ando provoked Ishikawa by declaring that Ishikawa would always lose to him because the justice he practices is “halfbaked”. Then taunted him by welcoming him to “this world”. Ishikawa swayed between right and wrong and was forced to make the ultimate decision for the sake of his own justice and revenge for the dead. While shock waves run through the people who know Ishikawa well, Kudaka Takeshi (Kunimura Jun), the director of inspection, begins interrogating him at the headquarters. Although Kudaka has a genial demeanour, he is very observant and gets a strange feeling from Ishikawa. In the middle of the interrogation, Ishikawa encounters a beautiful woman Sudo Mami (Nakamura Yurika) on the streets. He hears her pleas to catch the person who killed her and takes unexpected action … … What is his final decision?
Official Website: www.tv-asahi.co.jp/border

This blog contains information and musings on current and upcoming Japanese dramas but is not intended to be comprehensive.
View all posts by jadefrost →
This entry was posted in Fall 2017 Drama Specials, TV Asahi and tagged Border Series, Endo Kenichi, Kunimura Jun, Oguri Shun, Omori Nao. Bookmark the permalink.