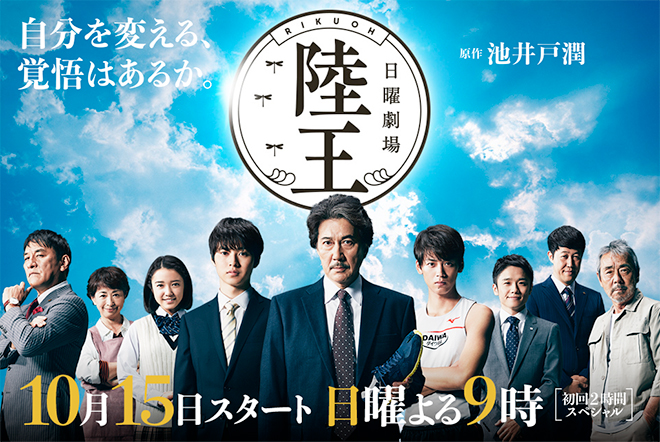 Story
Miyazawa Koichi is the fourth generation CEO of Kohazeya, a manufacturer of Japanese socks in Gyoda City, Saitama Prefecture which was founded more than 100 years ago. He is increasingly distressed by worsening cashflow problems as the annual demand for socks drops. One day, Miyazawa visits his his financing bank, Saitama Chuo Bank, to discuss an additional loan. His request is accepted this time but the bank’s loan officer Sakamoto Taro suggests that he try venturing into a new business. Even though Miyazawa casually responded to that fanciful talk in that situation, he begins to give serious consideration for the sake of Kohazeya survival. He soon decides to stake Kohazeya’s survival on the development of running shoes that offer the feel of barefoot running by using the company’s technology for making Japanese socks and immediately takes action. However, this is extremely difficult path for a small company of little more than 20 employees which lacks funds, manpower and development capability as well as the ability to compete against famous global sports brands like Atlantis. But Miyazawa is determined. He is introduced to Arimura Toru who owns a sporting goods store and is a certified running instructor, by Sakamoto. Arimura invites him to come and watch the Toyohashi international marathon in Aichi Prefecture and he heads there with his son Daichi to learn more about running.

Characters
Yakusho Koji as Miyazawa Koichi
The fourth generation CEO of Kohazeya. As the annual demand for Japanese socks declines with changing times, he starts the development of Rikuou running shoes to turn around the business. However, he has a tough road ahead. He lacks the knowledge to make shoes and also hard-pressed for capital including development budget.

Yamazaki Kento as Miyazawa Daichi
Miyazawa Koichi’s son. He has graduated from university but has failed to find employment so he helps out at Kohazeya while looking for a job hunting. But he has not found what he truly wants. He does not wish to take over the family business which has no future and rebels against his father. However … …

Takeuchi Ryoma as Mogi Hiroto
A strong athlete who ran in the Hakone Ekiden. Amid the attention he has been getting as an up-and-coming rookie, he injures his knee in the Toyohashi International Marathon. His running style turns out to be the cause of the injury and he sets his sights on a comeback by working to improve his form.

Kamishiraishi Mone as Miyazawa Akane
Miyazawa Koichi’s daughter. A third-year high school student who is enjoying her youth. She loves her father and worries about her brother Daichi who does not have a job. She indirectly conveys whatever happens to Miyazawa. A girl who is devoted to her family.

Kazama Shunsuke as Sakamoto Taro
An employee of Saitama Chuo Bank’s Gyoda branch. He values relationships with people and not the size of a company. He recommends that Miyazawa Koichi consider Kohazeya’s future and start a new business. He supports Kohazeya but … …

Shiga Kotaro as Tomishima Genzo
Kohazeya’s chief clerk who has worked since the time of the previous CEO. At times, he confronts Miyazawa Koichi with the harsh reality as he develops the new business, but his desire to protect the company remains unchanged.

Agawa Sawako as Masaoka Akemi
An energetic elderly woman who manages the female works in Kohazeya’s sewing division. Her sewing skills are called a national treasure. She has a strong sense of responsibility. The sewing division will not exist without her. Even Tomishima Genzo is no match for her.

Mitsuishi Ken as Arimura Toru
After working at a sporting goods manufacturer, he set up his own sporting goods shop. He is also a running instructor and has a wealth of knowledge. He gives advice on the development of Rikuou.

Dan Fumi as Miyazawa Mieko
Miyazawa Koichi’s supportive wife. She is well aware of everything about the family and naturally their son Daichi who is worried about getting a job.

Pierre Taki as Obara Kenji
The sales manager of the Japanese branch office of the major US sporting goods manufacturer Atlantis. He is thoroughly results-oriented and will coldly drop any athlete who is no longer of any use. He is a man motivated by self interest.

Terao Akira as Iiyama Haruyuki
The former CEO of Iiyama Industry. He devises a special processing technology for cocoons and invents Silkray. However, the company goes bankrupt as a result of the huge amounts of money invested in development. He is aiming to turn things around by banking on Silkray which has been patented.

This blog contains information and musings on current and upcoming Japanese dramas but is not intended to be comprehensive.
View all posts by jadefrost →
This entry was posted in Fall 2017 Dramas, TBS/MBS and tagged Ikeido Jun, Kazama Shunsuke, Mitsuishi Ken, Pierre Taki, Rikuou, Terao Akira, Yakusho Koji. Bookmark the permalink.