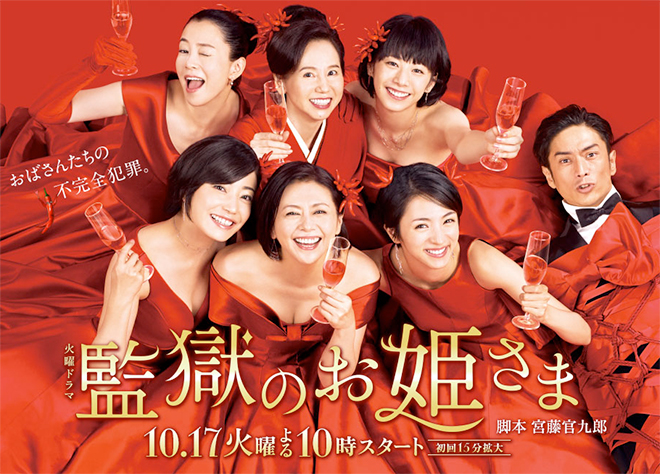 Story
The story begins with five women – Baba Kayo, Wakai Futaba, Daimon Yoko, Adachi Akemi and Katsuta Chinatsu – plotting to kidnap Itabashi Goro, the handsome CEO of a large corporation. Their motive is not immediately clear but it is gradually revealed that he murdered his lover. They want to expose the truth and clear the false charges against previous CEO’s daughter Edogawa Shinobu who is still in prison. However, their revenge does not go according to plan and some developments cause occasional panic. The women first met six years ago while serving time for various crimes at a women’s prison – Kayo for the attempted murder of her unfaithful husband; Akemi for possession of illegal drugs; prison leader Chinatsu for hiding money to evade huge tax; Yoko for cheating and embezzling money; and Shinobu for committing murder. A stern prison officer and instructor, Futaba, watched over the five of them. She had hated crime all her life and educated them strictly to straighten them out. However, as she came into contact with them, her cold, shuttered heart gradually opened and she was captivated by the feelings of these hopeless but charming women. On Christmas Eve, Chinatsu who is well-known as a charismatic economic analyst and Goro make guest appearances on a TV programme. There is something cozy about the two of them after meeting each other again for the first time in years. In the middle of the recording, there is a cue card with the words “Your son has been kidnapped” which shocks Goro. In fact, this was set up by Kayo who had come into the studio after keeping tabs on the movements of Goro and his family since morning. She then gets in touch with Yoko and Akemi and heads to an outlet store in the suburbs. They are trying to kidnap Goro’s son but things are thrown into disarray when Yoko brings the wrong child. Looking at the plan they have drawn up, they wonder how to turn things around … …

Characters
Koizumi Kyoko as Baba Kayo
A former bank employee who was a career woman. She has been married to her husband who was a company colleague for 15 years and they have one son. She stabbed her philandering husband on impulse and is serving time in prison for inflicting bodily injury. She is unhappy that she is the only one without a nickname. Her favourite phrase is “keep calm!”.

Mitsushima Hikari as Wakai Futaba
Nicknamed master, she is a strict prison officer at a women’s prison. She is also the instructor for educating the female prisoners on vocational training. She detests second offenses of all crimes. She has a sharp mind and is swift at execution.

Iseya Yusuke as Itabashi Goro
The company president of EDO Milk, formerly Edogawa Milk. He is young, successful and handsome. He had a girlfriend but in order to secure his position as the next CEO, he got close to Edogawa Shinobu and asked her to marry him. On the other hand, he murdered his girlfriend who got in his way and framed Shinobu for her death.

Kaho as Edogawa Shinobu
Nicknamed princess, she is the daughter of the CEO of Edogawa Milk, a major dairy producer. Itabashi Goro, the deputy CEO at that time, asked her to go out with him and they were on good terms until their pre-wedding trip. During the trip, she was arrested for murdering Goro’s girlfriend and sentenced to 12 years in prison.

Sakai Maki as Daimon Yoko
Nicknamed actress, she ran out of money to pursue a young actor whom she was very hooked on. She is serving time in prison for swindling and embezzling money.

Morishita Aiko as Adachi Akemi
Nicknamed elder sister, she is the wife of the former leader of a designated organised crime group. She took the rap for her husband’s crimes in order to save him and turned herself in. She is serving time in prison for possession of illegal drugs.

Kanno Miho as Katsuta Chinatsu
Nicknamed money management technique, she is a famous, charismatic economic analyst. She was given a prison sentence for hiding millions in assets, evading tax and insider trading. However, she is incorrigible and transmits the events in prison on Facebook and email magazines. She earns several million a year and is called the charismatic female prisoner.

Ikeda Narushi as Goma Hajime
The warden of the women’s prison. He has adopted a series of surprise moves to make prisons come across as bright and positive. He is susceptible to the word “novel”.

This blog contains information and musings on current and upcoming Japanese dramas but is not intended to be comprehensive.
View all posts by jadefrost →
This entry was posted in Fall 2017 Dramas, TBS/MBS and tagged Iseya Yusuke, Kaho, Kangoku no Ohimesama, Kanno Miho, Koizumi Kyoko, Kudo Kankuro, Mitsushima Hikari, Sakai Maki, Tsukamoto Takashi. Bookmark the permalink.