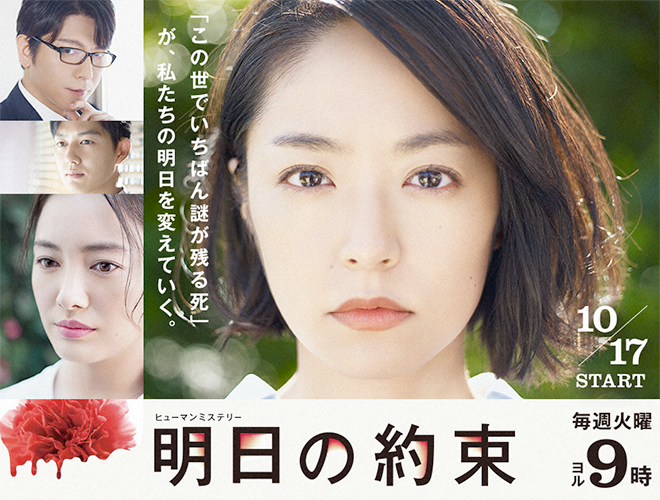 Story
As a high school counsellor, Aizawa Hinata is in a different position from parents and teachers. She listens to troubled students talk about their problems at school and at home and is committed to their psychological support. She is told by her boyfriend of three years Honjo Kazuhiko that he wants to pay a visit to her house. But Hinata worries about the warped relationship she has had with her over-controlling mother from a young age which she could not discuss with anyone. One day, Hinata makes a visit to the home of a first-year student Yoshioka Keigo with Kirishima Naoki, the teacher in charge of the class. She is concerned that Keigo has not been attending school. Keigo greets them with his mother Makiko and seems cheerful but Hinata feels uneasy because he never breaks into a smile in front of them. Makiko eventually takes out a medical certificate and criticises the school for not being aware that her son was being bullied and suffers from slight depression as a result of that. However, Hinata suspects that Makiko is also the cause of this. Kirishima immediately questions classmates and the teacher in charge of the basketball club which Keigo belongs to. Despite the teacher’s assertion that there are no problems within the club, Hinata insists on hearing from the members. Then she receives a phone call from Makiko that Keigo ran away from home. Keigo comes to confess that he likes her. However, he dies mysteriously the next day. Hinata takes action to determine the cause of his death and learns that the boy suffered insidious bullying at school and excessive meddling by his mother. He had a record of delinquency and kept rough company. Hinata is hounded by Makiko who believes that she is responsible for her son’s suicide, and is driven to the verge of breaking down.

Characters
Inoue Mao as Aizawa Hinata
A school counsellor who works at Tsubakigaoka High School. The type who throws herself into her role, she is diligent and positive which compensates for her lack of experience. She was raise by a strict, over-controlling mother Naoko who had extreme mood swings. She had no self-confidence and a tendency to be sensitive to the moods of other people until she was in high school. When she was an elementary school student, she was compelled by her mother to write in the diary called “Tomorrow’s Promise” which she exchanged with friends at school, and her mother would ask for “improvements” every day. Her mother’s existence influenced her to study psychology in university and later become a school counsellor. She has a boyfriend Honjo Kazuhiko whom she has been dating for three years.

Oikawa Mitsuhiro as Kirishima Naoki
The mathematics teacher in charge of Class 1B at Tsubakigaoka High School. Students and parents have strong faith in him because he is sincere and affable. Among the group of teachers who only think of shifting the responsibility, he is a reassuring presence to Aizawa Hinata who tends to get isolated. Even in the case of the death of Yoshioka Keigo, he works alongside Hinata to shed light on the truth and becomes the person who understands her the most.

Kudo Asuka as Honjo Kazuhiko
Aizawa Hinata’s boyfriend. They have been dating for three years. He works for a bridal company and is swamped with work every day but he has a gentle nature and constantly supports Hinata. He witnessed the domestic violence of his older brother who has already passed away, with his own eyes, and has lived with mixed feelings in a unique family environment. This starts to have an impact on his relationship with Hinata later on.

Haba Yuichi as Todoroki Hiroo
The principal of Tsubakigaoka High School. He has a mild manner and demonstrates an understanding of Aizawa Hinata’s passion as a school counsellor. He comes under pressure to respond to the death of Yoshioka Keigo.

Tezuka Satomi as Aizawa Naoko
Aizawa Hinata’s mother. A “toxic parent” who has bound Hinata with her hysterical behaviour and extreme mood swings. She is exceedingly self-righteous and does not understand her daughter’s emotional scars. Even now she thinks they are a regular mother and daughter on good terms. She knows little about Hinata’s personal life and also the existence of her boyfriend Honjo Kazuhiko.

Nakama Yukie as Yoshioka Makiko
Yoshioka Keigo’s mother. She dotes on her only son, keeps a watchful eye on everything he does and constantly gives him pressure. The daughter of a prominent local figure, she feels married life with her husband is a failure and this becomes the reason for her deepening attachment to her son. She claims Keigo’s truancy is due to bullying in school. After his death, she goes after the school.

This blog contains information and musings on current and upcoming Japanese dramas but is not intended to be comprehensive.
View all posts by jadefrost →
This entry was posted in Fall 2017 Dramas, Fuji TV and tagged Ashita no Yakusoku, Inoue Mao, Nakama Yukie. Bookmark the permalink.

2 Responses to Ashita no Yakusoku