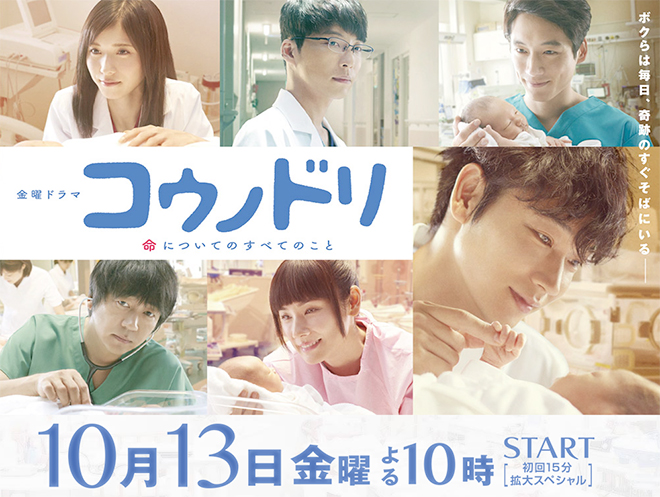 Story
Two years have passed. Kounotori Sakura is now a veteran obstetrician at Persona General Medical Centre. He goes to the hospital on a remote island where his former teacher Ogishima Katsuhide is. Seeing Ogishima face the islanders up close, reminds Sakura of something. Meanwhile, Shimoya Kae and Shirakawa Ryo, who were housemen, have become specialists and work energetically. Upon his return from the remote island, Sakura examines Hayami Mana, an expectant mother who is hearing impaired, with Komatsu Rumiko, the head obstetrics and gynaecology nurse. Mana’s husband Kenji has accompanied her to the centre but he is deaf too. Because it is difficult to convey medical terms through sign language and lip reading, they use a whiteboard to communicate the medical results in writing. Another obstetrician Shinomiya Haruki examines a pregnant career woman Sano Ayaka who wants to return to work quickly. She asks whether she will be able to give birth as planned but he tunes out her question and carefully does an ultrasound scan. Shinomiya learns from results of the medical examination that Ayaka’s baby has a small hole in the heart called ventricular septal defect. He and Imahashi Takayuki, the chief of the perinatal centre, delicately convey this news to a terribly upset Ayaka and her husband Yasutaka. Ayaka is overwhelmed with anxiety, worried both for her child and whether she can ever return to work. Similarly, Mana also discloses her worry to Sakura before delivering her baby … …

Characters
Ayano Go as Kounotori Sakura
An obstetrician and also a genius pianist with the name ‘Baby’. The team leader of the department of obstetrics and gynaecology, he has the confidence of his fellow doctors and patients. He has been working with the wish of congratulating all babies who have been born. In fact, his mother, who was a single mother, passed away shortly after his birth and he was placed with a home for infants and a children’s orphanage. He was raised with love by someone whom he adores as his mother. From that time, he was taught the piano and to put his feelings of joy, sadness and pain in the piano. Baby composes and plays his own tunes which transcend genres such as classic, jazz and pop. Sometimes he would get summoned back to the hospital during a live performance and disappear from the stage barely 10 minutes from the start. Two years have passed and he is helping out his teacher when he was starting out as an obstetrician, Ogishima Katsuhide, who is waging a one-man battle on a remote island.

Matsuoka Mayu as as Shimoya Kae
An obstetrician who works under Kounotori Sakura. She has become a specialist after completing her housemanship and is officially assigned to Persona’s department of obstetrics and gynaecology. She still acts rashly at times, but is much more dependable than two years ago. She hopes to be like Sakura who looks at things from the patient’s point of view and matures day by day. Amid the harsh reality of the medical frontline where few female doctors return to work after childbirth, she has a sense of the difficulties of a working female. She and Shirakawa Ryo, who joined at the same time, are on sufficiently good terms to bicker as usual but there is no hint of any romantic development. This time, she encounters a big situation, just as she and others recognise that she can stand on her own feet.

Yoshida Yo as Komatsu Rumiko
Persona General Medical Centre’s head obstetrics and gynaecology nurse. Her mother was also a obstetrics and gynaecology nurse and ran her own clinic, but took responsibility for causing the death of a baby who had congenital diaphragmatic hernia and closed the clinic. She remembers her mother’s face as she told her, “Delivering a baby is scary. If the mother dies, the baby may also die. Even so, people come here and not to a hospital for childbirth. That’s why failure is not allowed.” It is precisely because she carries around these feelings that she regards delivering a baby as scary and thinks herself a coward. Although there were times when she resented her mother for prioritising work over the family, witnessing childbirth and the expressions of mothers carrying their newborn babies motivated her to become an obstetrics and gynaecology nurse too. She believes this is her calling. She has an easygoing character, but understands an obstetrics and gynaecology nurse’s stance on obstetricians. Kounotori Sakura and Shinoma Haruki, whom she supervised when they were housemen, respect her as their “teacher”. This time, she approaches a turning point as a female.

Hoshino Geno as Shinomiya Haruki
An obstetrician who joined at the same time as Kounotori Sakura. He used to be passionate, on good terms with Sakura and smiled often until some incident happened. If Sakura is the sun, he is the new moon in the night sky. Although his personality is the complete opposite of the compassionate Sakura, they respect and trust each other. Failure has resulted in his policy that “it is not his job to treat patients kindly”, “the work of an obstetrician is to put patients’ lives first rather than patients’ wishes”. Because of that, he coldly thrusts reality at patients and says harsh things. However, at the end of the last season, he finally gave a small smile but he still cannot be honest with himself and lashes out at Komatsu Rumiko, Shimoya Kae and even the newcomer Akanishi Goro.

Asano Kazuyuki as Osawa Masanobu
The director of Persona General Medical Centre. He is always smiling, but it is difficult to know what he is thinking about. As management, he puts the profitability of hospital operations first and fears problems that happens at the department of obstetrics and gynaecology which has a lot of lawsuits. But from a broad perspective, he supports Kounotori Sakura and the rest and endeavours to create a hospital for patients. He was the attending physician for Sakura’s mother when she was delivering Sakura. She passed away and he was also the one who made sure that Sakura entered the home for infants. He agonises about being sandwiched between thinking about the welfare of patients as a doctor and not making profits as a business man. But he is just seen as a money-making old man by the doctors. In the hospital, only he and Komatsu Rumiko know that Sakura is ‘Baby’. However, he always cautions Sakura to keep it secret because there are patients and directors who do not have a good opinion of an obstetrician being a pianist.

Eguchi Noriko as Mukai Shoko
A medical social worker who is in charge of Persona General Medical Centre patients. She and deals with them from a different perspective from the doctors, giving advice on patients’ social activities and emotional support. She counsels and helps expectant mothers about to go for abortion because they have no money and pregnant women suffering from domestic violence, and is involved in many aspects with Kounotori Sakura and the other doctors.

Omori Nao as Imahashi Takayuki
The head of the neonatal care department and concurrently the chief of the perinatal centre. He fights with tiny lives less than 1,000 grams in the neonatal ICU every day. He is not sociable and does not say a lot. But he always asks himself what is happiness to the babies and the families, and he is passionate about pediatric care. Because of this, even the doctors from the other departments view him with awe. He flatly shoots back at outfield views including those of the director Osawa Masanobu, and speaks gently to troubled subordinates. Kounotori Sakura and even Shinomiya Haruki are reassured by his presence and can place babies with the neonatal care department. Although he has a wife and two children, he hardly goes back home because of the babies whose futures are unknown. He has been busy securing personnel for the understaffed perinatal centre but is reaching his limit.

Sakaguchi Kentaro as Shirakawa Ryo
A pediatrician. He hopes to work in Persona General Medical Centre’s neonatal ICU. He turned against his family which has been doctors for generations and chose a different occupation. But in the end, he became a pediatrician like his father. He feels that he has something in common with Shinomiya Haruki and houseman Akanishi Goro whose fathers are in obstetrics and gynaecology. He respects and admires his boss Imahashi Takayuki who faces small babies every day. Amid the pressure from his family to take over the hospital, he feels strongly about continuing to learn at Persona General Medical Centre. This season, he runs into a high obstacle just as he gains experience and confidence.

Sasaki Kuranosuke as Ogishima Katsuhide
A hospital director who fights alone as a general practitioner on a remote island. He was the teacher of Kounotori Sakura and Shinomiya Haruki when they were still rookies. He loves the islanders and is also loved by them. He becomes a compass for Sakura and Shinomiya for the future.